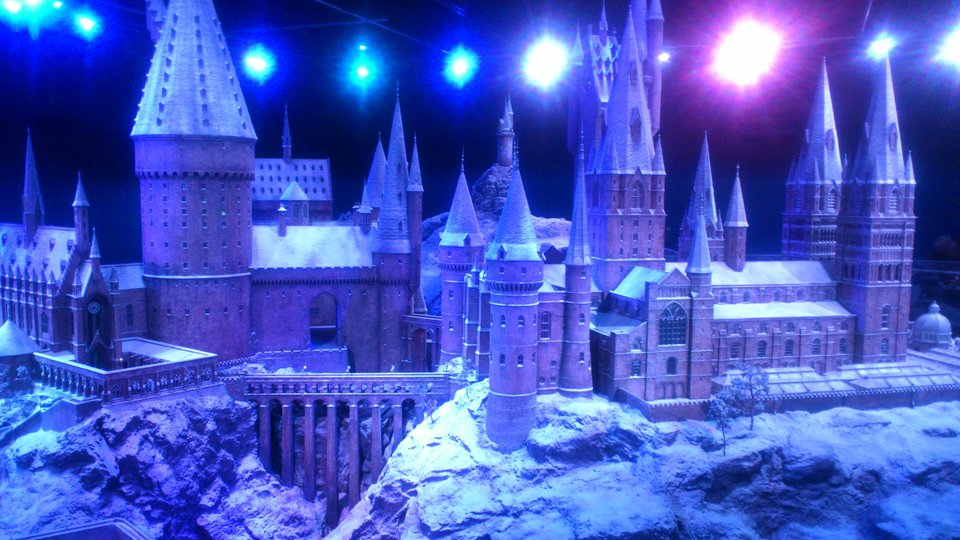 It was a star-studded affair at the Warner Bros. Harry Potter Studio Tour last night as they unveiled their brand new Hogwarts in the Snow attraction.

Marking the official opening of the spellbinding festive feature, guests at the event got the chance to discover how special effects experts make snow that never melts, how set dressers transform locations for Christmas scenes, and how flames are created without fire, as the Studio Tour opened the doors on its most magical makeover yet.

Celebrities and their families were greeted with a special Christmas cocktail before exploring festively-decorated sets including the Great Hall where delicious canapés were served, the Gryffindor common room, the Weasley kitchen and the breathtaking Hogwarts castle model.

Running from today until Sunday 31st January, Hogwarts in the Snow offers visitors the opportunity to see some of the Harry Potter film series’ most iconic locations dressed as they were for festive scenes, with authentic decorations, props and special effects additions.

In the Hogwarts Great Hall, visitors will spot trees decked with golden baubles and topped with witches on miniature broomsticks, as well as a replica feast. One side of the Great Hall has been dedicated to savoury props, featuring roast turkeys, hams studded with cherries and bowls of potatoes, while the other is devoted to sweet treats including flaming Christmas puddings and iced cakes.

For the first time this year, the Goblet of Fire will emerge from its original jewelled casket, rigged by special effects experts, and will be ‘lit’ with flames that change from blue to red. Featured in the fourth film, the impressive goblet was used as a way to select champions for the Triwizard Tournament. During production, the picture-perfect hero version was sculpted from a single piece of wood by the Prop Making Department, while a special effects replica was moulded in fibreglass and painted to look identical to its wooden counterpart.

The Hogwarts castle model has been transformed for the occasion by a team led by Model Effects Supervisor José Granell, who worked on the Harry Potter film series. The snow is hand-sprinkled onto the incredibly-detailed model and is made from a combination of granulated paper and grains of salt – chosen because it clumps like real snowflakes and catches the light like ice. Visitors can touch samples of the different types of ‘snow’ used during production, each selected for its ability to float like falling snow, crunch under foot or glisten in the light.

The scale model was first built for Harry Potter and the Philosopher’s Stone, with a team of 80 model makers working for almost seven months to create the original version. The crew updated it over the years when the story required it (the bridge was added for Prisoner of Azkaban, the Owlery for Goblet of Fire, and the Astronomy Tower for Half-Blood Prince), and the model was used for nearly every exterior shot of Hogwarts seen in the first six Harry Potter films. The specialist work was so detailed that it would have taken one person more than 74 years to complete!

Fireplaces throughout the attraction (including those in the Leaky Cauldron and Great Hall) have been ‘lit’ with special effects fire, created by filmmakers using a combination of water vapour and lighting effects. The Gryffindor common room and Weasley kitchen have also been dressed for the occasion with streamers, Christmas crackers and oranges.

Check out the Warner Bros. Studio Tour London – The Making of Harry Potter: Hogwarts in the Snow launch gallery!