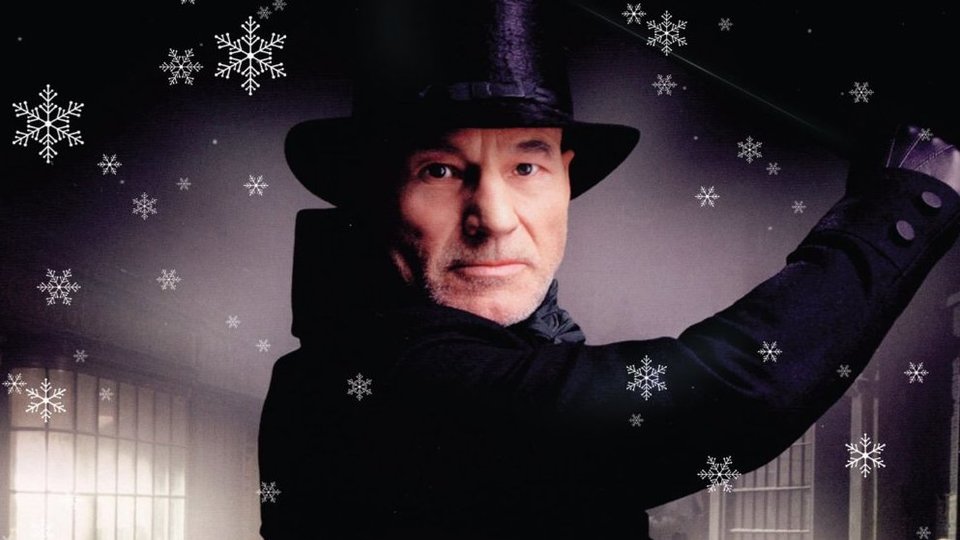 It’s the perfect time for A Christmas Carol to be released on DVD. This 1999 version stars a stellar cast including Sir Patrick Stewart OBE (Star Trek: The Next Generation, X-Men film series), Richard E. Grant (Withnail and I) and Dominic West (The Wire).

In 1988 Stewart started performing a one-man show of The Christmas Carol and in 1993 he won an Olivier Award for the performance. He lost his hair at the age of 18. The traumatic experience made Stewart timid and he found that acting served as a means of self-expression. His debut TV appearance was on Coronation Street in 1967 as a Fire Officer.

Charles Dickens published A Christmas Carol in 1843 and is widely considered to have defined what a Christmas celebration should be – until Coca Cola’s marketing men got in on the act. A recent episode of Antiques Roadshow found that an original first draft of A Muppet’s Christmas Carol from 1845 was actually a forgery. Dickens’ original was lost in a fire.

Synopsis: It is Christmas Eve 1843, and Ebenezer Scrooge (Patrick Stewart) has just buried his longtime friend and business partner, Jacob Marley. Understandably, Scrooge is in a melancholy mood as he returns to work. Seven years later, Scrooge’s bad mood has become a perpetual state of mind. His loyal, but meek clerk, Bob Cratchit (Richard E. Grant) is the constant target of Scrooge’s cruelty and bitterness. Scrooge’ s nephew, Fred Bowley, spreads Christmas cheer, but all his uncle can say is “Bah! Humbug!”. Scrooge finds himself alone in his office on Christmas Eve. He hears the rattling of chains and sees before him, the ghost of Jacob Marley. Marley warns Scrooge that the suffering he causes others, he will have to repay – even in death, and warns him that there’s only one chance to escape that fate. He also informs Scrooge that three spirits will visit him and he is to obey them in order to redeem himself.

To be in with a chance of winning the film on DVD, just answer the question below.