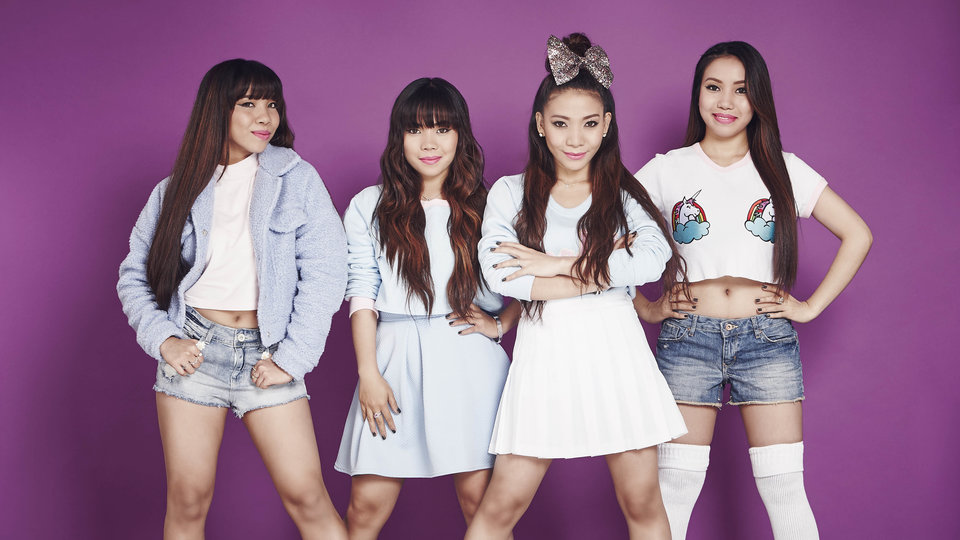 Week two’s theme at the live shows was Reinvention and the contestants took it really seriously with some incredible moments. Following the surprisingly early exit of Alien Uncovered and Bupsi the remaining contestants fought for their spot and a shot at winning the competition. By their side were the judges, Rita Ora, Cheryl Fernandez-Versini, Nick Grimshaw and Simon Cowell.

The song: Sound of The Underground / Boom Clap (Girls Aloud/Charli XCX)
Our verdict: So far 4th Impact has been one of our favourite bands on the show. This week though it was the first time we were unsure about the girls performance. Even though the girls sounded OK we thought the vocals were a little too scream-y and couldn’t enjoy the performance.
The comments: Simon said that the girls were fantastic but wasn’t sure about the song choice. Nick said that he thought the song worked and that the performance felt real. Rita said that the vocals were great.

The song: Teardrops (Womack & Womack)
Our verdict: We thought Mason did well this week, he’s dancing skills were on point and his vocals matched the sexy performance. We weren’t so sure about the outfit. The song sounded fun and we thought Mason looked like he regained his confidence back.
The comments: Rita said that the song didn’t go anywhere but the performance was there. Cheryl said that it was one of his best vocals so far in the competition. Simon said that tonight Mason looked confident and that the performance was brilliant.

The song: All About That Bass / Bang Bang  (Meghan Trainor / Jessie J, Ariana Grande & Nicki Minaj)
Our verdict: We like Anton at the best of times and we especially enjoyed him this week. Out of all the contestants he was the one we thought made the biggest transformation and it worked. The vocals were as always going to be on point and the crowd loved the performance.
The comments: Nick said it looked like a bad musical and that he thought was really bad. Rita said that Anton was good and great but blamed Simon’s bad song choice for a bad performance. Cheryl was more positive and said that it was difficult theme week but that she didn’t think it was ‘him’. Simon said that it was amazing and dismissed his colleagues comments.

The song: Return of the Mack (Mark Morrison)
Our verdict: It was always going to be a difficult week for Kiera due to her being in the bottom three last week but we thought Keira brought all the goods to the party. Her vocals weren’t perfect, in fact we thought that she was a little pitchy but her performance was star worthy, we loved her stage presence and dance moves. The entire thing was hot, hot, hot and a highlight of the night.
The comments: Cheryl said that it was a great song choice even though it started off a bit shaky. Simon said that she tried but that he wouldn’t have picked that song for her. Nick said that he was glad that she was back this week and that it was a cool performance.

The song: You Can’t Hurry Love (The Supremes)
Our verdict: Ché came to the stage and we weren’t disappointed with the young singer’s amazing vocals. We loved his song choice and thought that his soulful vocals gave the track a completely new life.
The comments: The judges gave Ché a standing ovation! Rita said that he absolutely smashed it and that she wanted to cry. Cheryl said that the acapella start was perfect. Simon thought that he turned the competition upside down and that he was special and even more handsome. Mentor Nick said that there was so much identity in his singing.

The song: Billie Jean (Michael Jackson)
Our verdict: Louisa didn’t waste anytime showing off her vocals but her version of Michael Jackson’s Billie Jean wasn’t that great. The performance improved as it went on but still we weren’t excited.
The comments: Cheryl thought that maybe it was a bit awkward. Simon said that the young singer was ridiculously good and that she made him love his job. Rita said that she loved her and that she did good.

The song: Crazy In Love (Beyonce)
Our verdict: Monica looked steaming hot and dangerous on stage. We thought her daring performance of Crazy In Love was great and that it completely matched her personality. The vocals were good and in control.
The comments: Cheryl thought it was an X-rated performance and that maybe she could have reinvented differently, as a vulnerable version of herself. Simon hated the performance because it was not Monica in his opinion and that Rita had put more effort into the performance of the other contestants. Nick could see Simon’s point and said that he loved how raw she normally is but still loved her.

The song: Somewhere Over The Rainbow / What A Wonderful World (Israel Kamakawiwo’ole / Louis Armstrong)
Our verdict: It didn’t really feel like Max had reinvented himself this week. The young singer still stuck to summery tunes and even though we enjoyed the performance we didn’t think that it was as daring as other contestants’ choices that evening.
The comments: Nick kicked off with a joke and loved Max’s voice but thought that it it was a poor song choice. Rita said that Max was cool but that it was a boring song. Cheryl also said that the vocals were great but the song didn’t do him justice.

The song: What Makes You Beautiful / Cheerleader (One Direction / OMI)
Our verdict: It’s undeniable how much energy Reggie N Bollie bring with them to the stage and the young lads delivered again this week. We thought the song choice was brilliant and that they brought it to live. Again it was impossible to keep a smile of our face.
The comments: Simon applauded the song choice and said that he absolutely loved it. Nick said that it was good too and Rita thought it was amazing. Cheryl thought the duo stole the show.

The song: Hold Back The River (James Bay)
Our verdict: Lauren was up last and her performance cleverly showed off her incredible vocals. The singer sounded great on stage and the song was beautiful and a great way to end the show.
The comments: Cheryl thought it was a great vocal. Simon though that it was the best he every heard Lauren and he was happy that she had won her confidence back. To Nick it thought like a winning performance and Rita said that she had some pipes on her and said that she had respect for her.

The X Factor will be back on Sunday at 8pm on ITV.