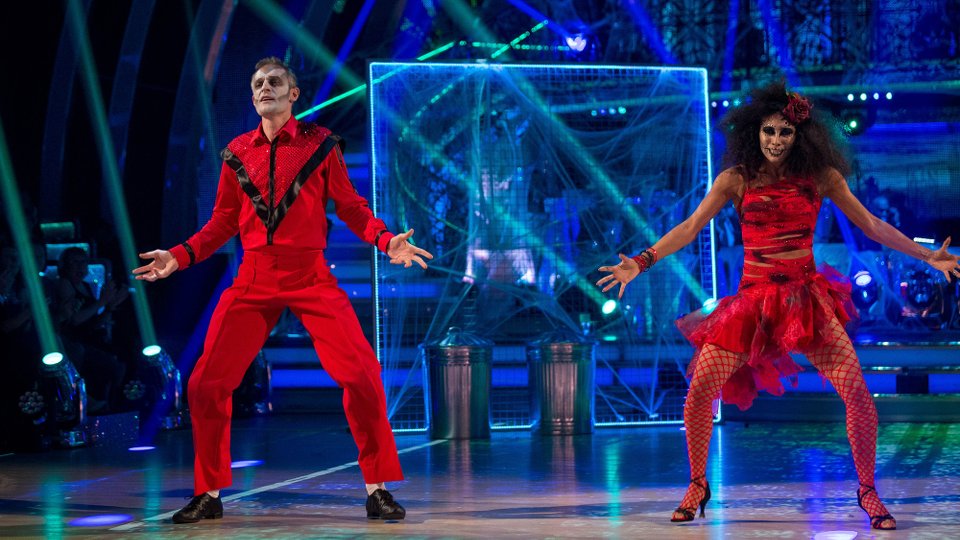 Strictly Come Dancing 2015 delivered its annual Halloween Special last night and what a show it served up.

After all 11 couples had danced it was actress Georgia May Foote and her partner Giovanni Pernice that found themselves at the top of the leaderboard. At the bottom was weather presenter Carol Kirkwood and her partner Pasha Kovalev picking up a lowly 13 points.

Tonight we’ll find out which two couples have to battle it out in the dance-off to keep their place in the competition and progress to next week. Before then we’ve reviewed all of the performances and put together out Top 5 of the evening.

It definitely wasn’t the most technically correct dance but you can’t say that Jeremy didn’t give it his all. We were so entertained by his Salsa to Michael Jackson’s Thriller with his partner Karen Clifton, that the performance definitely stayed in our minds after the credits rolled.

We thought the judges were a bit harsh on this one. Kellie and Kevin’s Harry Potter themed Paso Doble was pretty adventurous and different. We liked the use of the table and Kellie’s energy was remarkable. Whatever the judges saw wasn’t what we did!

Call the Midwife’s Helen George delivered a fantastic Samba dressed as a Mummy last night. She was full of character and attack, and her sync with Aljaz Skorjanec was fantastic. It was a great close to the show.

Len may not have got the story but we certainly did. Anita was absolutely mesmerising as Maleficent and she gave a very dramatic performance. The contemporary feel to the Waltz was incredible and we think this one should have scored higher.

Finally! The judges gave Georgia a break and actually praised her performance. She’s been quietly doing well under the radar all series but the judges have been harsh with her. Last night she was completely in sync with Giovanni and delivered an amazing Ghostbusters themed Tango.

Strictly Come Dancing 2015 continues tonight at 7.15pm on BBC One. Find out which couple will be going home next.