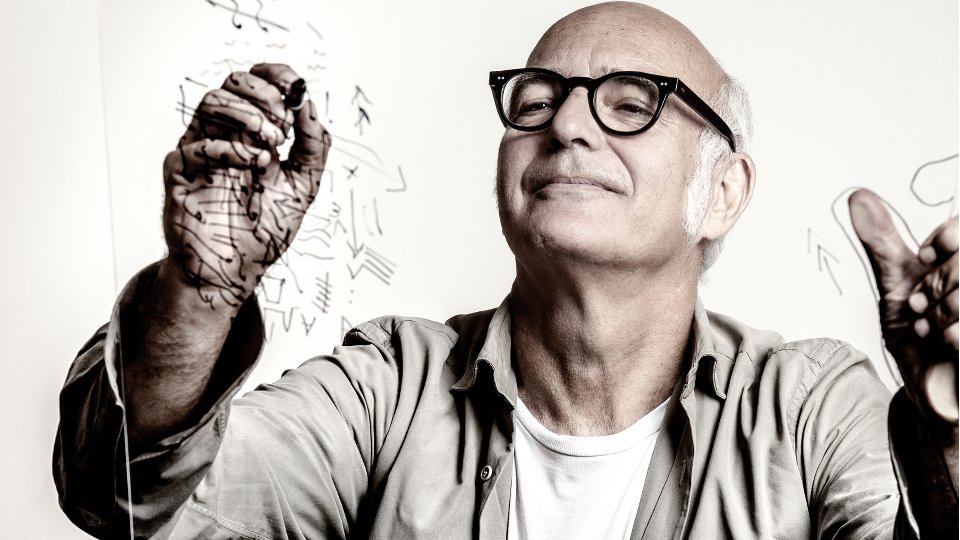 Ludovico Einaudi is a best-selling classical pianist and a prolific composer of music that defies genre but touches audiences worldwide with its intricate melodies and mesmerising atmosphere.

His latest album, Elements, takes its inspiration from the natural world, and contains a dozen pieces that evoke everything from an approaching storm to the quantum dance of molecules. The exhilarating music, which combines piano and string, is sure to capture the imaginations of fans devoted and new.

We took some time to catch up with Ludovico to ask him about Elements, and found out along the way how the man himself describes his music, how he came to design the cover art, and why his work enjoys such a devoted following in the UK.

What was your inspiration for Elements, and what themes does the album explore?

The inspiration came from the idea of exploring elements in different fields. I started to think about the elements of music as an architect, thinking about the elements of a building, questioning my own musical space. I wanted to question myself and see if I could see a different solution, how I should draw my windows, my doors and the stairs in my space. And so I started to read about architecture, I found very interesting writing from Kandinsky regarding the fundamental elements of art. I was looking also at more general scientific matters like the periodic table of the elements and going back further reading Greek philosophy.

Are there any tracks that you are most proud of, or which offered particular challenges?

I think every track represents a part of a frame I like to keep together. There are many tracks on the album that I am proud of but at the same time I feel that each track is part of a bigger drawing. It’s the combination of all the tracks that makes it stronger.

Your unique music has been described in many ways and transcends pigeon-holing – but how would you summarise your work?

I think I sit parallel with a forest. In this forest you have many different trees living in the space. Some species of trees were born there, others come from different countries and they find a way in this forest to live together. With my music I feel there are lots of different ‘trees’ and it’s the combination of all the ‘leaves’ that belong to different types of music that make it interesting.

How do you set about arranging the compositions: is it always piano first?

Sometimes it’s just piano and other times I also write down ideas. Sometimes I start with the computer, I have samples of an orchestra I use. There are lots of different possibilities.

What is the recording process like, once you and ‘Ludovico’s Band’ have assembled in the studio?

I give the band some initial ideas and then we work together recording, listening back and adjusting. Listening back sometimes you notice things you didn’t in rehearsal, the track’s direction or intention can change. It’s a process of trying until we achieve something that I like.

The album’s cover art is very distinctive. Did you know what you wanted to create, or did you allow the design to evolve?

I always collaborate with the designer because I feel I need to be connected with the cover – it needs to represent what the album is about. With ‘Elements’ I started to draw some ideas and symbols to give the designer direction and he came back with my drawings as a cover so we decided we didn’t need to search anymore.

Your music is loved worldwide, but why do you think it resonates especially strongly with UK audiences?

I think because there is a moody, romantic, emotional approach that people in the UK love to hear. There is also something spiritual that I personally love about music and a folk flavour that connects with popular music. There are many layers which I think the British audience enjoy.

How often do you hear new melodies in your head?

It depends, sometimes I have something that I am working on and it’s is missing something – I keep hearing a frame of music repeating in my head as my brain is automatically pointing to me where there is a problem, flashing back and forth in my memory. There will be eureka moments when I start to figure out a melody that could solve the problem.

How does introducing compositions to live audiences in performance compare to the private focus of studio recordings?

It a completely different atmosphere, there is a special attention and thrill that you have on stage that you don’t feel so intensely when you are recording. What I like best about performing live is that there is always a chance to change and explore other possibilities from the original composition of the piece so it is a continuous evolution.

There are some live performances coming up in March 2016. What can fans expect from the shows?

The first part of the show will be based on the new album ‘Elements’ and the second part will be some Einaudi classics! Some solo and also some new arrangements with the band.