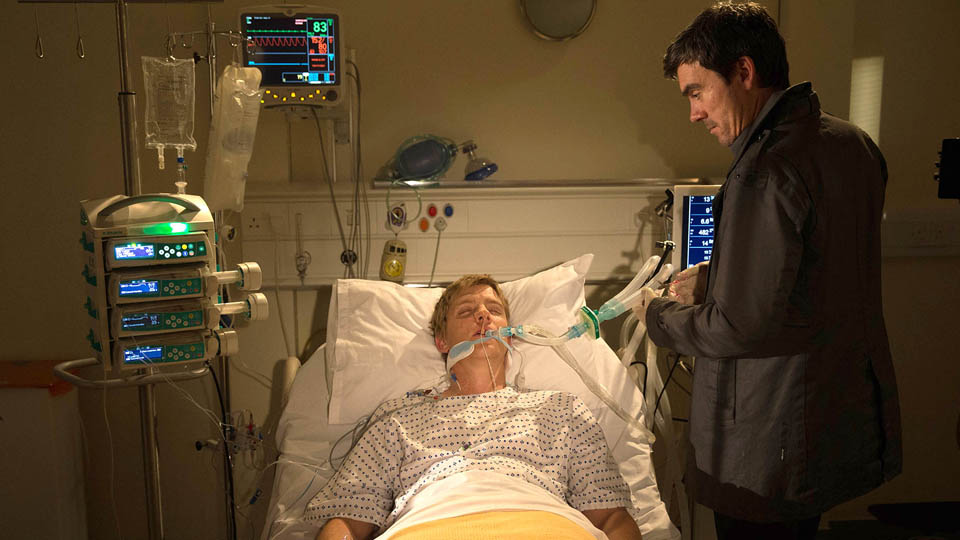 As Emmerdale celebrates its birthday this week, we will be treated to a first: a flashback episode.  That’s right Thursday’s episode will be a special rewind edition back to the night that Robert is shot and will reveal who pulled the trigger as well as the promise that three secrets will be revealed that will rock the village forever!  But will Robert manage to stay alive until then?  Read on.

Will Cain pull the plug on Robert?

Chas is worried that whomever shot Robert has now turned their attentions to her after a number of events occur.  Meanwhile, Cain visits Aaron in the remand centre and is seriously concerned when he alludes to killing himself.

Later, Diane suggests that Chas smashed up the bar herself to help prove Aaron’s innocence.  Chas breaks down when she hears that Aaron has been charged.

Cain feels the need to protect his family.  When he hears a furious Eric saw Chrissie with a gun on the night of the shooting, he starts to think how to divert the police attention back to her as the shooter.

He sneaks into Home Farm during Bernice’s engagement party and heads upstairs wearing gloves.  Before he leaves, he crashes the party and runs through the list of suspects in front of all the guests.  Why does Chrissie look guilty?

To finish his plan, Cain asks Adam to help him kill Robert and make sure Chrissie takes the fall.  Adam is shocked and ends up telling Zak about Cain’s plan.  As Cain heads into the hospital, hiding his face from CCTV with a giant teddy bear, it looks like Robert’s air supply will be turned off.

Lawrence is back to being a free man and desperately wants to reconcile with Bernice.  He invites her to meet for a coffee knowing that if she doesn’t turn up their relationship is ovr.  As Bernice debates whether to go, Kerry sticks her oar in and turns Bernice’s attentions back to Andy.  She goes to visit him at work and asks him if he thinks he could ever love her back.  Just how will Andy respond?

In the end, Bernice decides to make a go of it with Lawrence but is left flat by the reaction of Diane and Victoria to the news.  When Lawrence decides they should have an engagement party, Diane isn’t keen to attend but Doug encourages her not to push her daughter away.  However, after Cain has crashed the party, she wants nothing more to do with the White family.

Paddy gets an unwelcome call

Rhona suggests that her and Paddy have some alone time after all the stress of late, but he turns her down saying he has to check up on Chas.  When he gets to the Woolpack he drowns his sorrows and when Rhona comes to get him he apologises for what he’s done to her and Chas.  They assume it’s just the drink talking, so why does Paddy look guilty?

Later in the week, Paddy takes a phone call and his face drops when he recognises the callers voice.  He tells them not to call again, saying they never met and he doesn’t know them.

Has it got anything to do with the night Robert was shot?  If not, why has he purposely changed the contact number for Chloe (the woman Marlon met at the singles night) on Marlon’s phone?  Poor Marlon will think he’s unlucky in love and that she gave him a false number.

Finn suspects Emma might be behind the trashing of the woolpack but she protests her innocence.

After getting stuck in the toilet, Sandy puts Ashley in an upsetting predicament when he makes a big right to die plea.

Ross returns to the village and is annoyed Andy seems to be on friendly terms with Pete.