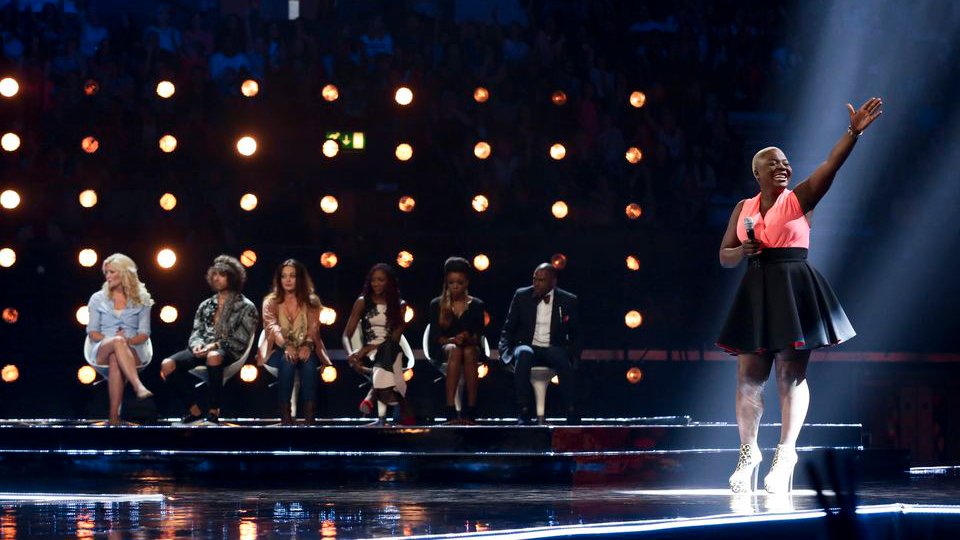 It was the final week before the judges houses and it was Cheryl Fernandez-Versini’s turn to fill up her chairs and unfortunately the incredible talent didn’t help her in her task at all. Helping her was the crowd and the judges, Nick Grimshaw, Simon Cowell and Rita Ora.

Up first was girl group Silver Tone whom Cheryl gave a chair. Bekln hoped to be able to impress Cheryl and secure a space to the next round of the competition. The crowd was convinced and the judges also thought the boys deserved to go through, which could only mean that Cheryl’s chairs were full and she had to make the difficult decision of ending Rumour Has It’s competition.

Simon’s overs category was on last and hoping to get through was Holly Johnson with an original version of Happy. The judges were not impressed and Simon especially said it was a definite no from him thus ending her competition. Up next trying to get through to Simon’s house was Max Stone. Unfortunately it sounded like Simon wasn’t in a good mood from the get go. Stone tried his luck and sang Bob Marley’s Turn Your Light Down. We thought the 27 year old did a great job and the crowd seemed to back us up. Simon seemed to struggle with his decision but gave Stone a seat nevertheless even though he thought he was boring.

Vicky Ann Nash was praised by the judges after her performance of Lisa Loeb’s track Stay but Simon said she lacked the ambition. Nevertheless she got a chair. Joseph McCaul was up next and we loved his vocals. Simone was worried that people wouldn’t remember him and decided to give him a chair regardless.

Stephanie McCourt was brilliant singing Aretha Franklin but Simon said that she wasn’t likable enough. Simon gave her a seat based on her voice. Simon’s mood didn’t seem to improve as the contestants flew by but he did enjoy Kerrie-Anne Phillips’ performance of Help by John Fartham.

Up next was Tonatha Ralhan who mastered the vocals to Christina Aguilera’s Impossible perfectly and managed to steal Stephanie McCourt’s chair. The competition started to heat up as Simon had to make the tough decision of swapping seats. 29 year old Zen Blythe used his charms rather then his vocals to get through and it paid off with Simon giving him a chair however the crowd did not agree with him trying to get rid of Vicky Ann Nash and in a cruel turn of faith Joseph McCaul lost his chair.

After a short break it was Hannah Marie Kilminster’s turn to try and convince Simon that she should be in his top six. Cheryl didn’t think she was singing the tune in time and Nick thought she was more of a musical singer. Simon thought she deserved a chair even though Cheryl seemed to disagree with that decision. Hannah’s win was Stone’s loss.

Jennifer Phillips’ performance of Up To The Mountain was gob-smacking and Simon’s only response was that he loved her.  Simon struggled but had to give up Vicky Ann Nash’s chair up in favour of Phillips.

Up next was Philippino Neneth Lyons, which unfortunately didn’t sing well enough to secure a chair to go to the judges house.

Hoping to secure a chair was the force of nature that is Bupsi. The 37 year old was dancing and giving it her all. Nick thought that her vocals weren’t amazing but that should be a great performer to watch over the weeks. It was another tough decision for Simon but he swapped Tonatha.

Up last was 27 year old Ebru, who had the incredibly task of trying to win the last chair. She hoped to do so with a rendition of Beyonce’s If I Were A Boy. Nick and Rita thought that she had a unique voice and deserved a chair. Zen had to give up his chair and in a weird twist to the show Simon brought back Max Stone and swapped him with Hannah Marie Kilminster.

The X Factor will be back next Saturday at 8pm.