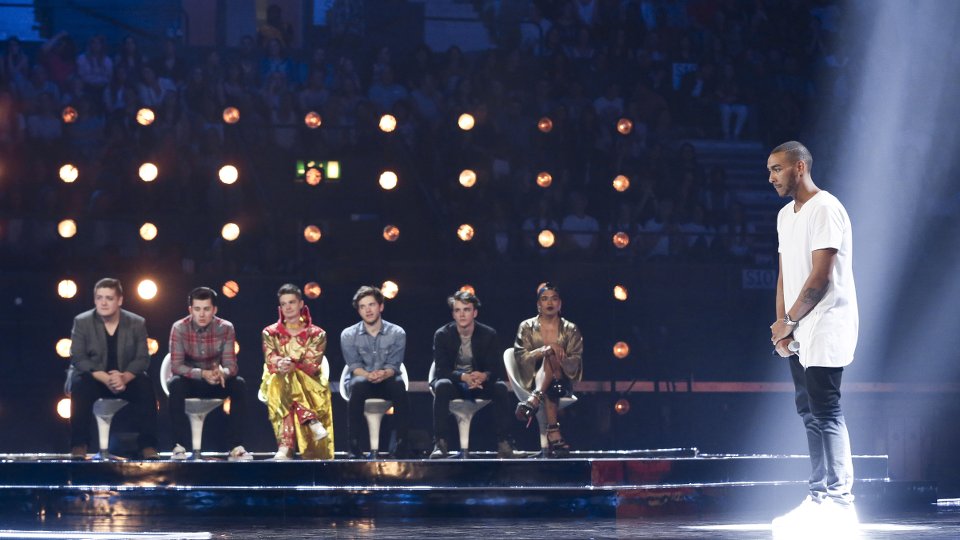 On week two of the six chairs challenge, it was Nick Grimshaw’s turn to pick his six contestants and helping him in his task were other judges, Simon Cowell, Rita Ora and Cheryl Fernandez-Versini. It was certainly an eventful episode with ups and downs and nerves getting the best of some of the contestants with spectacular consequences. Indeed it was one of the best episodes of The X Factor 2015 so far.

Singing first for a seat in the boys category was Brodie Kelly. Unfortunately for him he didn’t seem to do enough to impress Nick Grimshaw. After him trying to get through to the judges house were Tom Davies, Jordan Luke Cage and Danny Sharples of whom none managed to impress Nick.

Hoping to turn things around was Tom Bleasby who sang I Look To You. Rita said she really liked him and Cheryl gave him some constructive criticism but Nick thought he deserved to get a chance and gave him a chair. Jamie Eldridge also tried to impress the judges and it paid off with his performance securing him a chair.

Flashy Papasidero decided to sing Moulin Rouge’s Lady Marmalade and we thought he did a great job. Although Nick wasn’t 100% the crowd gave him a hand and this meant the Italian contestant got a chair. Simon Lynch was another hopeful singing for a place in the next step of the  competition. His vocals and looks seemed to be good enough for the judges who all loved his performance.

Trying to have his moment was Nathaniel Landskroner, who decided to sing I Have Nothing by Whitney Houston. For us the performance was a little shaky and the contestant appeared petrified even forgetting his words, which at this stage of the competition should mean a direct axe. Even so Nick took a chance and gave him a chair.

Another memorable contestant was Seann Miley Moore, whose performance completely blew us away. The young singer, who came all the way from Australia wasn’t afraid to face his competitors singing to them and completely owning the stage. It was an easy decision to make for Nick, who let him have the last chair thus beginning the interesting part of the show.

Ever so cocky was Mason Noise, who got the crowd going for him and we have to admit that his performance was a real treat.  It seemed to go downhill rapidly from there after Mason decided to take his cockiness a bit too far and started challenging Simon. The judge was trying to calm the situation down but it was hard to do this with Mason choosing to go on a rampage for his art. We have to admit we didn’t see this type of behaviour coming this far in the competition but this is why reality TV has ability to surprise you. Unfortunately this meant Mason was out of the competition as he showed no remorse.

Josh Daniel hoped to impress the judges with his singing and it was an easy task with vocals such as his. Simon didn’t think it was his best performance but luckily Nick thought he deserved a chair, which meant one of the boys had to lose his. Papasidero was the first contestant to lose his chair to much dismay of the crowd.

Also trying to get through was Ben Clark, who sang Kodaline’s ballad All I Want and it paid off for him as he completely swept the judges off their feet. It wasn’t easy being one of the contestants sitting on the chairs as the judges praised Ben’s performance. Ben got a seat at the expense of Tom Bleasby but this seemed to anger the crowd who kept chanting ‘bring him back’. The costumer always gets what it wants and in this instance the costumer was the crowd, who managed to change Nick’s mind. Unfortunately it meant that Nathaniel Landskroner was out of the competition.

Up next was Ollie Marland who staged a great performance of Megan Trainor’s hit Marvin Gaye. We enjoyed his stage presence and we thought he deserved a seat. It was the end of the road for Jamie Eldridge.

Last but not least was soul singer Che Chesterman who completely smashed it with his performance of classic track, It’s A Man’s, Man’s, Man’s World. The judges were all gobsmacked and unfortunately this meant that Ollie Marland had to go.

It was Cheryl’s turn to pick her contestants for the groups category. Menn on Poinnt were on first and even though their vocals weren’t the best of the competition but we did enjoy the energy these boys brought on to the stage and their infectious positivity. Nick loved the performance whilst Simon thought their vocals weren’t amazing. Cheryl was happy to give the duo a chair. Decibellas were up next and even though the girls performed well, Simon didn’t think they stood a chance in the competing and Cheryl agreed and didn’t give the girls a chair.

Next up was girl group Alien, whom gave a fantastic performance showing off their vocal and dancing skills. Of course the girls also looked amazing in their colourful hair. Cheryl said it was her easiest ‘yes’. Rumour Has It hoped to impress the judges with their version of Hold Back The River. Nick thought the girls were boring but Cheryl disagreed and put them through.

Filipino group, 4th Power came on stage and meant business showing off their incredibly vocal skills and sassy dance moves. The otherwise shy girls were completely at ease on stage and of course they had to get a chair. Simon thought they were amazing and Cheryl thought the performance was phenomenal.

Hoping to secure a chair was another girl group, Mon Amie, who sang an interesting version of Britney’s Spears’ Hit Me Baby One More Time. We didn’t think the performance was outstanding but nevertheless Cheryl gave the girls a chair. Boy band, The First Kings were up next and looked like they had been transported from the 90s into this decade. Cheryl also gave them a chair thus meaning that the competition was about to heat up.

The X Factor will be back on ITV next Sunday at 7pm.