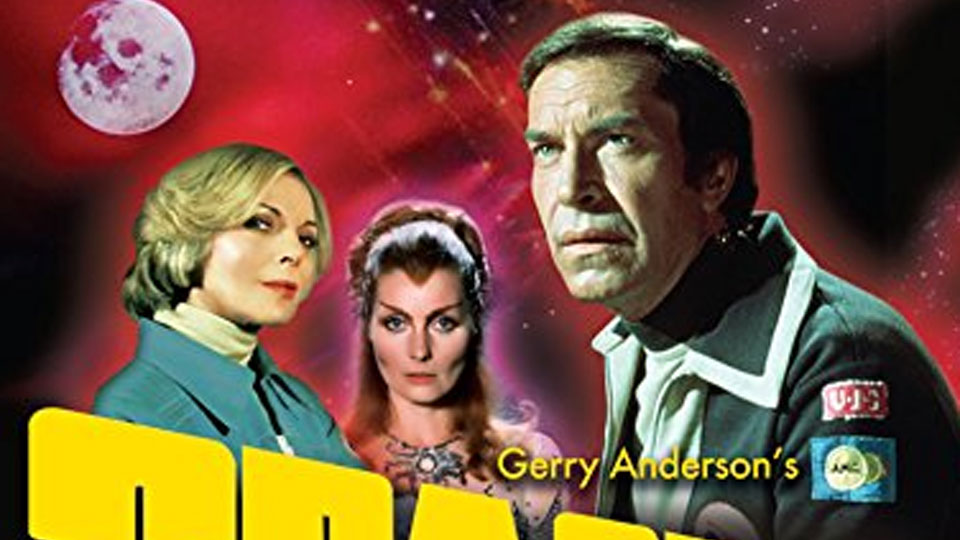 Both series of Gerry Anderson’s 1970s science-fiction epic Space: 1999 are now available to buy on Blu-ray and DVD. Network had previously released the double bill episodes The Bringers of Wonder to whet our whistles for the second series, and they are part of a whopping twenty-four instalments contained on this release.

For the uninitiated, Space: 1999 was a high-concept and hugely ambitious series that imagined a small colony of humans storing nuclear waste on the dark side of the moon. An accident dislodges the moon from earth’s orbit, sending our hapless heroes hurtling through space. The Alphans – humans who were working on the moon base – are reluctant pioneers – with ambitions only to stay alive and return to earth. After UFO, it was Gerry Anderson’s second attempt at a live-action series, and has some ideas recycled from a second series of UFO that never materialised.

The first series of Space: 1999 won plaudits for its stunning visual effects, amazing set design (strongly inspired by Kubrick’s 2001: A Space Odyssey – and the episode Brian the Brain makes the inspiration even more explicit with a homage to the HAL 9000 story) and excellent model work, overseen with flair by the late Keith Wilson. It also drew criticism for the ponderous and worthy nature of its storytelling, and the dryness of the characterisations. The second series is something of a departure from the first. It’s sexed up (avuncular, bald-headed Barry Morse makes way for dashing young couple Maya and Tony, played by gorgeous duo Catherine Schell and Tony Anholt), and the storylines have become more action-focussed. Unfortunately, meddling with the formula and correcting some aspects that were lacking in the original series proves here like rebuilding a house of cards: what was good about the first series (the thoughtful stories) is sacrificed, and attempts at deeper characterisation and an increase in humour feel forced. Overall, the second series is less satisfying than the first, and Space: 1999 remains one of those shows with a terrific concept that is, frustratingly, never realised to its full potential.

There are some cracking episodes to be found within the second series (as well as a few duds), and the big budget high-profile production could afford to call in a litany of big-name guest stars (Billie Whitelaw, Patrick Troughton and Bernard Cribbins to name a few). We get off to a great start with The Metamorph, the episode that introduces Catherine Schell as the shape-shifting alien Maya who becomes a regular character. It can’t be overstated how much Catherine Schell adds to the show, and she is by far the most successful of the new additions. She gives a great performance which is both alien and warm, and there’s far more humanity to be found in Maya than in the frosty Barbara Bain and the po-faced Martin Landau. Brian Blessed, who around the same time would give the performance of his career as Augustus in I, Claudius, guest-stars as Maya’s overbearing father, and the two of them ensure that the season opener is one of its highlights.

The Exiles is memorable for seeing soon-to-be Blue Peter presenter Peter Duncan guest-star, alongside Keep It In The Family’s Stacy Dorning, as a pretty young alien banished into space by his own people. Yet appearances can be deceptive, and these beautiful young creatures in figure-hugging ice-skater costumes might have been exiled for good reason… But who cares? They’re lovely to look at.

There’s even an episode that dares to tackle religion. In New Adam New Eve, the Alphans are visited by somebody claiming to be the creator. Undoubtedly he’s a powerful being, but his rhetoric is a touch humancentric, and his appearance (actor Guy Rolfe with a beard, flowing cloak and sandals as Magus) ticks every cliché in the Judeo-Christian book, leaving Koenig and the others suspicious of the veracity of his claims. There are some unintentionally funny monsters in this one, even if Bernard Kay performs beneath a ludicrous costume with a certain dignity. Whilst the episode steers clear of controversy, there are some welcome moments such as Magus forcing the two couples to pair-bond, but with the other partners.

Much that some of the episodes stand out for their intriguing premises, others stagnate under wearisomely familiar plot devices such as doppelgängers (Seed of Destruction) and variations around the base under siege. The prize for worst performance goes to Ken Hutchison, who guests in The Seance Spectre. Naturally, being a militant trade unionist miner, he’s played as a northerner with as much subtlety and understatement as Christmas.

The series rounds out unsatisfactorily with The Dorcons, a standard episode that guests Patrick Troughton and Gerry Sundquist (Soldier and Me). Since the producers weren’t sure no further series would be made, the episode doesn’t resolve the premise of the show, but leaves the Alphans on the moon base still floating through space. It’s perhaps a fitting end to a series that never quite figured out how to make the most of its premise.

Tellingly, we’ve said little about the impact of the two leads of the series – Martin Landau and Barbara Bain. Their characters, John Koenig and Helena Russell, remain dry and unappealing, which is a shame, because Landau in particular shines in other productions, and he’s very personable and charismatic in a 1994 interview on the special features in which, for the most part of a half hour, he recalls his feelings about the successes and failures of the show. Perhaps the inability of the two leads to shine is partly down to arid characterisation and a concept that was never fully thought through, but the actors have to shoulder some of the blame. It’s Catherine Schell who captivates the most in this second series, and thank goodness her character was introduced. Nevertheless, she’s not sufficient on her own to raise Space: 1999 to the level of a science-fiction classic. It has its moments, and plenty of glitz and visual impact, but overall it is too short on emotion and soul to draw in the casual viewer.

Kudos to Network for the stunning restoration, and in high-definition, the series looks immaculate. With expensive film stock and amazing visual effects, fans really should invest in the Blu-ray release to enjoy the series at its best. There are plenty of extras on the sixth and final disc, including a contemporary student film about the making of the second series that is most enjoyable for Keith Wilson’s excellent interview and Gerry Anderson’s perspective on the show.