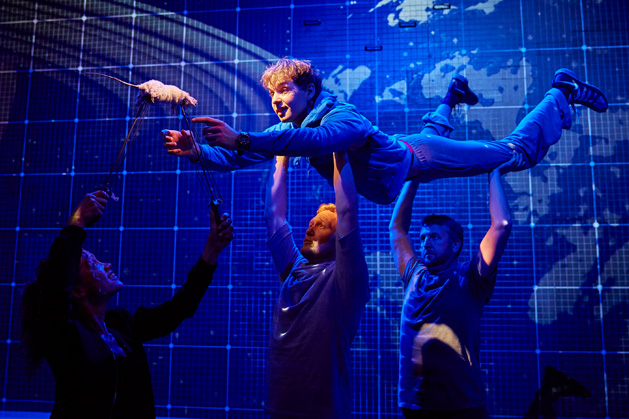 The National Theatre’s production of The Curious Incident of the Dog in the Night-Time have announced the release of over 135,000 tickets, taking bookings at the Gielgud Theatre in London’s West End to 18th June 2016.

Director Marianne Elliott’s seven time Olivier Award winning production of The Curious Incident of the Dog in the Night-Time can also currently be seen on tour in the UK and Ireland (until 21th November) and on Broadway at the Ethel Barrymore Theatre where it has received five Tony Awards including Best Play.

Christopher, fifteen years old, stands besides Mrs Shears’ dead dog: It has been speared with a garden fork, it is seven minutes after midnight and Christopher is under suspicion. He records each fact in a book he is writing to solve the mystery of who murdered Wellington. He has an extraordinary brain, and is exceptional at maths while ill-equipped to interpret everyday life. He has never ventured alone beyond the end of his road, he detests being touched and distrusts strangers. But his detective work, forbidden by his father, takes him on a frightening journey that upturns his world.

The Curious Incident of the Dog in the Night-Time is adapted by Simon Stephens from Mark Haddon’s best-selling book. He said: “The adaptation was a really joyful experience. I knew two things in adapting the play. I knew that the key to it was the relationship between Christopher and his teacher. Although it’s not that central in the novel, what struck me was that everybody in life has a favourite teacher. Even people who hated school, even people who found school a miserable experience, had one teacher who they loved more than others and thought got them in a way that other teachers didn’t. I knew that if I could get that relationship right, then we could create an evening in the theatre that people could recognize themselves in.”

Author Mark Haddon added: “When I wrote Curious Incident I was absolutely convinced that it couldn’t be adapted for film or stage. The novel is one person’s very insulated and sometimes profoundly mistaken view of the world. We’re stuck inside Christopher’s head from cover to cover. We see the world the way he sees the world. And there’s the problem. Or so it seemed to me. Theatre is radically third person. You can infer what people are thinking but you can do so only from what they say and what they do. I simply couldn’t imagine how Christopher’s story could be told with any integrity in this way. Simon’s genius was to recognize that I was completely and utterly wrong.”

The Curious Incident of the Dog in the Night-Time is at the Gielgud Theatre until 18th June 2016. Book online at nationaltheatre.org.uk or call Box Office 020 7452 3000.

In this article:Gielgud Theatre, Leeds Grand Theatre, Mark Haddon, National Theatre, Simon Stephens, The Curious Incident of the Dog in the Night-Time