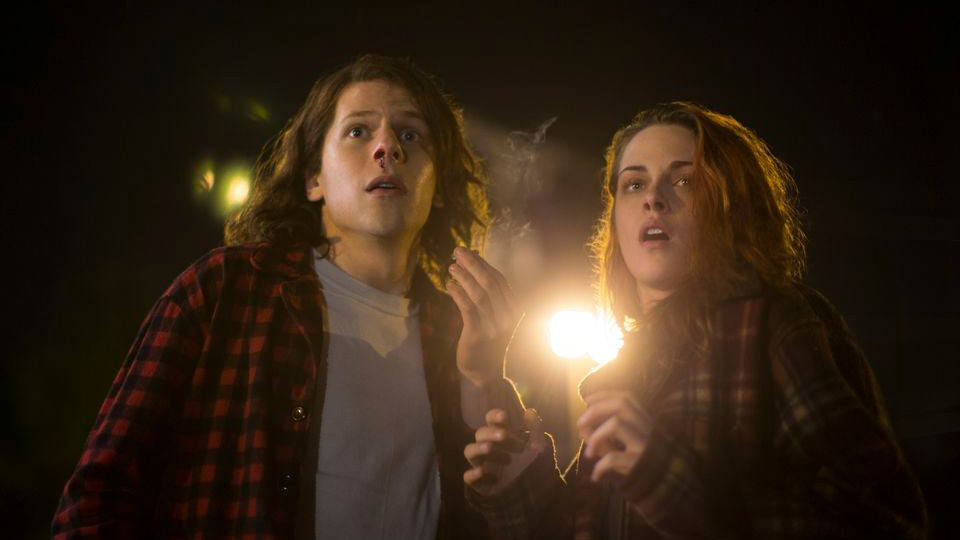 “For me, the script combined so many different things in an interesting and organic way. The conventions will be familiar to filmgoers, but they are mashed up a little bit, which changes everything.” Iranian-British filmmaker Nima Nourizadeh is talking about action comedy American Ultra, in Cineworld cinemas September 4, 2015, which is his second film as director after 2012’s raucous found-footage teen comedy Project X, which marked him out as a director readily able to bring a fresh spin to tried-and-tested genre formulas. “I like taking things that people think they know and presenting them in a new light,” he adds.

Based on a screenplay by Max Landis, who previously penned Josh Trank’s alternative teen superhero outing Chronicle (2012), American Ultra re-teams Jesse Eisenberg and Kristen Stewart – after the romantic drama Adventureland (2009) six years ago, and before Woody Allen’s upcoming latest, for which they are currently in production – for a decidedly different turn in their careers.

Eisenberg plays Mike Howell, a perpetually unmotivated slacker who spends his days getting stoned and working at the local Cash & Carry. He is also penning a graphic novel about a superhero monkey that will probably never be published, let alone finished. Mike’s small-town life with his more reliable girlfriend Phoebe (Stewart) is suddenly turned upside-down when he discovers that – unbeknownst to him – he is a highly trained, lethal CIA sleeper agent, and his secret past puts him and his girlfriend in immediate danger.

When Howell is targeted for termination by the very organisation that created him, he teams up with his former handler, Lasseter (Connie Britton), to reawaken his dormant skills and become the superhuman killing machine he was born to be. When an obsessed agent, played by Topher Grace, decides to take Mike out, he is forced to take drastic measures to protect his and Phoebe’s lives.

Combining high-octane action with hilarious comedy, American Ultra is a refreshing addendum to the slacker genre that allowed Nourizadeh the opportunity to seamlessly move into an all-new area of filmmaking, and create something akin to a mixture of Pineapple Express (2008) and the Jason Bourne franchise. “The film ticks so many boxes with a unique blend of disparate elements that you don’t normally see together,” he says. “It has romance, it has action, it has a lot of comedy, so it’s full of surprises and takes you places you won’t expect. It starts off in the tiny, almost claustrophobic world that Mike and Phoebe have been living in and then it gets crazy!”

After having met in 2013, Landis and Nourizadeh began exchanging ideas about potential future projects for them both to collaborate on, with Landis’s spec script for what turned out to be the pair’s first feature together standing out from the crowd. Landis drew inspiration from a real-life, covert CIA program known as ‘MK Ultra’, which was launched in the 1950s as an attempt to create super warriors that lasted three decades. The mission was to transform ordinary citizens into superhero-esque operatives by using psychotropic drugs to enhance psychological conditioning, a form of torture at the hands of government scientists who intended to treat the human brain like a computer and radically reprogram their subjects. This attempt to create effective and dangerous assets ultimately failed, though it led to the formation of a promising screenplay, Nourizadeh believes.

“The script exceeded my expectations. Max is an intriguing storyteller, and he feeds you information a little bit at a time until you are suddenly somewhere unexpected and completely crazy,” says the director. “His writing is always entertaining, but what separates this from other action comedies I’d read was that he nailed down the relationships between the main characters. It was the perfect second project for me.”

Coming off the back of an Oscar-nominated turn in David Fincher’s Facebook biopic The Social Network (2010) – and ahead of his performance as the bald-headed megalomaniac Lex Luthor in the eagerly-awaited Batman V Superman: Dawn of Justice (2016), Eisenberg brings his typical brand of witty neurosis to the role of Mike, and was the filmmakers’ first choice to play the slacker-turned-spy. “We knew it would be Jesse,” says producer David Alpert. “You just buy him as an innocent, small-town stoner. The action is completely unexpected coming from him, but not unbelievable. Jesse gives the character a grounded emotional intelligence even as the whole weight of a secret CIA program sees Mike becoming a target.”

For Eisenberg, who Nourizadeh believed was able to easily dumb himself down for the role so as to make himself unrecognisable, it was the chance to do something entirely different that appealed to him. “I’d never read anything like it. The characters felt totally real, the situations are surprising, and the way we deal with them seems truthful,” says the actor. “Mike and Phoebe are totally accessible, so people can live vicariously through them, and putting this very passive guy in the middle of an intense and violent world creates the potential for a lot of comedy.”