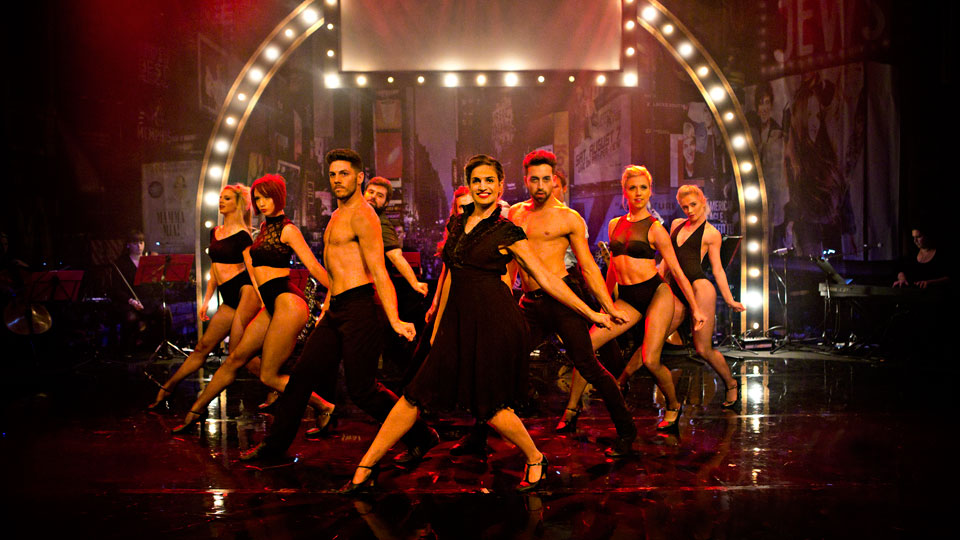 Part history lesson, part musical revue, You Won’t Succeed on Broadway if You Don’t Have Any Jews is a barn-storming, celebratory love letter to some of the Great White Way’s classic hits.

The premise is simple – a collection of songs are performed to celebrate and commemorate some of Broadway’s biggest Jewish talent, raging from musical legend Stephen Sondheim to Rent’s Jonathan Larson. The show runs through a chronological musical timeline via a decidedly cheesy projection. The pre-filmed interjections are strangely dreary but suffice in giving the audience a swift history lesson while setting up each section of the night, from the 1930s to the present day.

The creators of the production have a wealth of material to choose from, so while some seminal classics may be unfairly sidelined, the set-list generally hits the mark. With songs performed from shows including Les Miserables, Cabaret, Chicago, Beauty and the Beast, Annie, Get Your Gun and lesser-known titles like March of the Falsettos, all bases are covered.

You Won’t Succeed on Broadway if You Don’t Have Any Jews. Credit: Pamela Raith.

With a cast this strong, it feels almost unfair to single out performers for praise. The twelve singers and six dancers fill the stage with talent, without a real weak link between them. The company highlight is a show-stopping performance of Tradition from Fiddler on the Roof, which almost brings the house down.

Sarah Earnshaw is a revelation as the manically-deranged bride in Not Getting Married Today from Company. The tongue-twisting, rapid-fire lyrics are matched with a hands-down hilarious characterisation. Earnshaw proves she can also play it straight with a belting rendition of One Night Only from Dreamgirls.

You Won’t Succeed on Broadway if You Don’t Have Any Jews. Credit: Pamela Raith

Jackie Marks, the West End’s first ever Fantine in Les Mis, brings gravitas and raw emotion to I Dreamed a Dream, while fellow seasoned pro John Barr raises a smile with a pitch perfect performance of modern Disney classic Be Our Guest. X Factor runner-up Lloyd Daniels, promoted as something of a star turn, displays a beautiful tone of voice, but more ‘air-grabs’ than Celine Dion.

While the choreography was sharply executed and impressively ambitious for the small stage, it feels unnecessary, and sometimes distracting during some of the more intimate solo numbers. Surely Sophie Evans’ performance of Over The Rainbow doesn’t need a superfluous ballet routine blocking her spotlight? Another missed opportunity comes with the rushed Rent medley. It’s a nice idea, but those unfamiliar with the musical would be lost with the interchanging numbers.

But minor quibbles aside, Succeed is very much a success.