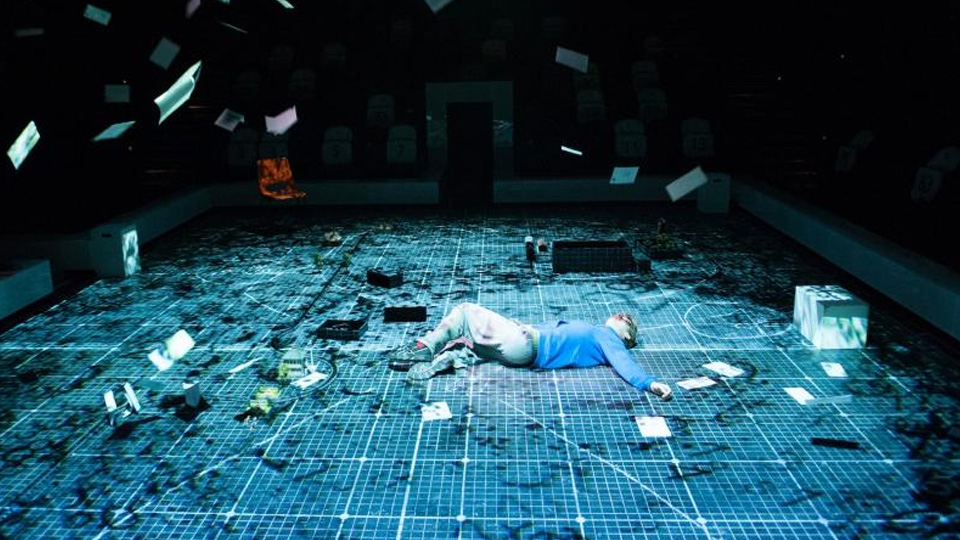 The National Theatre brings The Curious Incident of the Dog in the Night-Time to Leeds Grand Theatre this week. Based on Mark Haddon’s best-selling 2003 novel, the play follows the investigations of fifteen-year-old Christopher Boone as he attempts to solve the mystery of a neighbour’s murdered dog. The story is unique, presented from the viewpoint of a high-functioning autistic teenager who is voyaging through adolescence and domestic upheaval, constructing a world within a strict set of mathematical boundaries.

The domestic storyline is a simple one and follows the fallout of a marriage breakup and the darkly comic assassination of a dog with pitchfork. Christopher’s methodological approaches to solving the murder provide an insight into how he copes within a universe of chaos and irrational human behaviour, forming strategies to deal with new experiences and unexpected challenges.

Staged within a seemingly sparse cubic set delineated with co-ordinates, the characters of the piece move along lines in a disturbing disorder within a strictly mathematical world. Marrianne Elliott directs a diverse ensemble cast to create Christopher’s universe, with the use of traditional cross cutting to facilitate a number of short scenes and fast moving vignettes. Vibrant and rapidly performed, the drama has an almost workshop quality in its intensity, often lit from above with a computational rhythm which feels purposefully stagy; not unlike a reconstruction of events. The production stages the chaos of everyday life on a canvas of ordered geometry, using numerous projections to visualise the boy’s recollections and experiences. The effect upon the audience is immersive and often has the feel of a lecture buttressed with motion graphics, reinforcing how everyday life is unpredictably chaotic and jarring against a mindset of logical uniformity.

Joshua Jenkins plays Christopher with an earnest directness and honesty, conveying an urgency and desire for order. Punctuated by flashes of intellectual brilliance whilst frantic and unconfrontational, Jenkins is constantly charged and provides the character with a restlessness which is both endearing and fascinating. Details such as limited eye-contact with strangers and repetitive hand gestures provide a flicker of Christopher’s outward behaviour, but for the most part the performance remains introspective with an assisted narrative from Siobhan, Christopher’s tutor. Geraldine Alexander brings an almost fairy godmother quality to this role; overseeing, questioning and guiding Christopher’s actions on the outside, alien world. Professionally reassuring, Alexander is the perfect balance to Stuart Laing as the single-parent father, who offers a dangerously unpredictable humanity to Christopher’s world. There is a genuine sense of a relationship between father and son here, which is carefully forged yet suffering from a burgeoning strain.

An impressive ensemble buttresses the show, carefully choreographed in movements which literally lift Jenkins off his feet to walk on walls and fly through the air, exploiting all dimensions of the stage in a ballet of imagination countered with physics. There is an incredibly complex amount of stage business within the production, culminating in the live construction of a railway set which offers a level of detail that almost threatens to derail dramatic events in favour for pure toytown spectacle alone. It is, however, a beautifully realised special effect.

There is much levity in the show, drawn from Christopher’s view of characters who are “less intelligent” than himself, particularly with Clare Perkins who plays a number of eccentric characters and Roberta Kerr as a wonderfully dithering, good-natured neighbour. There are also no less than two small furry creatures in the production, much to the mirth of animals lovers in the audience.

A spectacle of light and sound and an odyssey of the mind and voyage of discovery, The Curious Incident of the Dog in the Night-Time ends by asking more questions than it provides answers.  It succeeds in bringing to the stage a story which seemed theatrically impossible, extending the awareness of a world view and telling a simple story through the eyes of a highly complex individual. Heartfelt, brutally honest and rarely twee, a sensitive and provoking tale is played with feeling and extends tolerance and awareness to those who think and act differently. The Curious Incident of the Dog in the Night-Time is an intelligent and educational piece of modern theatre, which explores an oblique perspective via an inspiring and entertaining route.

Thoroughly curious indeed, it will undoubtedly appeal to families, however some strong language may be unsuitable for younger children.