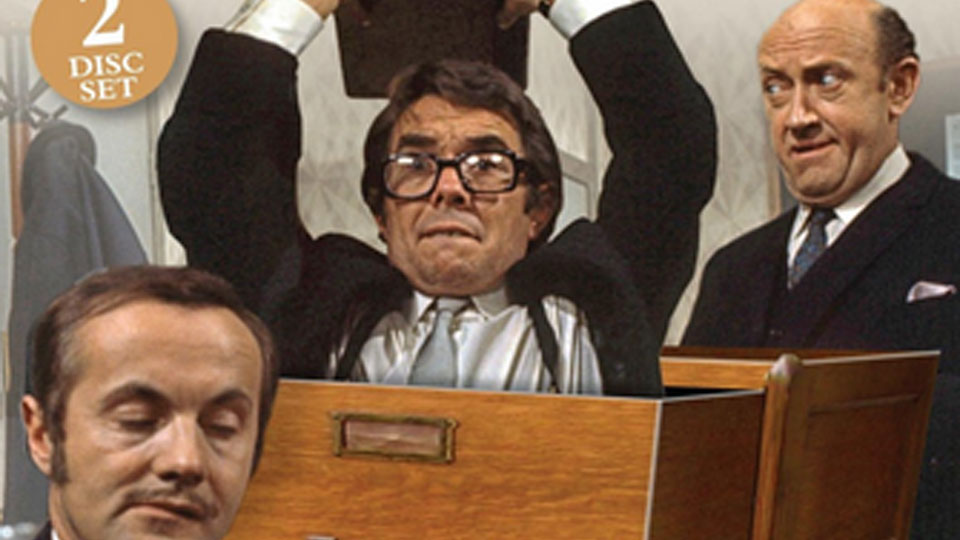 No, That’s Me Over Here DVD review

No, That’s Me Over Here! marks Ronnie Corbett’s first starring role in a television sitcom. This two-disc DVD release brings together all of the episodes of the third and final series from 1970, which were made in colour by London Weekend Television (LWT). Sadly, the first two series, made in black and white by a different production company, are no longer in the archives and are missing presumed wiped.

The appeal of the series lies in the quality of the writing and performing talent. Veteran gag and script writer Barry Cryer teamed up with two of the Monty Python’s Flying Circus gang, Graham Chapman and Eric Idle (an interesting union, since Chapman usually wrote with Cleese, whilst Idle wrote alone), at the same time as they would have been working on Python.

We follow the shenanigans of Ronnie Corbett’s life both at home and at his office job (the details of his work in insurance remain sketchy), and the array of colourful characters that populate his private and working lives. There are certainly shades of the later series, The Fall and Rise of Reginald Perrin. Corbett plays himself – sort of – since his character shares the same name as him, and he’s the only one who’s allowed little Richard III-like moments to break the fourth wall and address the audience directly. And he really is very, very fine, grasping this early rung on his ladder to comedy legend status with both hands. His trademark verbal dexterity is in evidence, as is a first-rate physicality that both works with and jars against his minuscule stature. Refreshingly, for comedy of the era when men were more or less emasculated and women mostly battle-axes, Corbett is allowed a sex life with his wife Rosemary (played with relish by Rosemary Leach). The two other main characters are Corbett’s neighbour and colleague, the smooth social climber Cyril (the wonderful Henry McGee) and their boss Mr Robinson (Ivor Dean).

As befitting the sitcom genre, episodes are self-contained and stand-alone, with the default settings of the series being reset at the start of each new episode, and most of the action taking place at Corbett’s workplace, home, or on the train during his commute. The series opens strongly with Old Age, an episode that sees a twenty-something join the workforce, leaving Ronnie and Cyril desperately trying to reclaim their youth and impress the females (who are all receptionists and typists… well… it was 1970… but the series is undeniably misogynistic). There’s an enjoyable bit of slapstick in Resignations, in which Cyril dupes Ronnie into believing that every employee has tendered their resignation in protest over a redundancy. When Mr Robinson takes Corbett’s letter, he has to go to extraordinary lengths to retrieve it before his boss reads it. So far so good, but it’s the third episode, Mother, that strongly impresses us. It’s the first to be set away from the office as Ronnie and Rosemary travel to visit Ronnie’s mother (played by Gillian Lind) – a well-meaning fusspot who is desperate for grandchildren. It’s here that the writing of Graham Chapman is strongly in evidence and the series feels fresh – since much of Corbett’s dialogue directed to and about his mother is cruel, his diatribes brought about through exasperation. At one point Lind and Leach end up weeping about the absence of children from their lives whilst Corbett fumes – and it’s hysterically funny!

Another episode sees Ronnie and Cyril invite Mr Robinson out for a meal, only for the customary mayhem to follow them to the restaurant, especially as Mr Robinson has his own problems in the form of his alcoholic wife. A later episode tackles the ever-thorny issue of religion – and kudos to the writing team for doing so with such gusto and honesty (Monty Python’s Life of Brian was under a decade away). That’s one of the two episodes to feature Colin Baker, the actor who would go on to play Doctor Who in the mid-1980s. The final episode utilises the social pressure cooker of a wedding, with a gay man being forced into marrying a woman to keep up appearances. Even mentioning the existence of LGBT characters was unusual in 1970 – possibly another influence of the late, great Graham Chapman?

Whilst No, That’s Me Over Here! is a neglected series, probably owing to its patchy history and relatively few surviving episodes, the quality of the writing and performances is high, and it remains enjoyable and frequently laugh-out-loud funny almost half a century after it was made. It was recorded in front of a live studio audience, which clearly lifts the performers. Network deserves great credit for unearthing and releasing the show, preserving it for posterity, but the major downside of the title is poor picture quality. Most of the time it’s acceptable, but there are moments where the picture is atrocious, with bleeding colours, black lines and wobble that will be familiar to those who remember recordings on VHS.

The historical significance of the show, and the fact that it remains very funny, makes No, That’s Me Over Here! well worth checking out. Fans of Ronnie Corbett and the Pythons in particular will derive much pleasure from it. Something of a forgotten gem, and a stepping stone for an array of major UK comedy talents.

The seven ‘Doctor Who’ stories to enjoy at Christmas