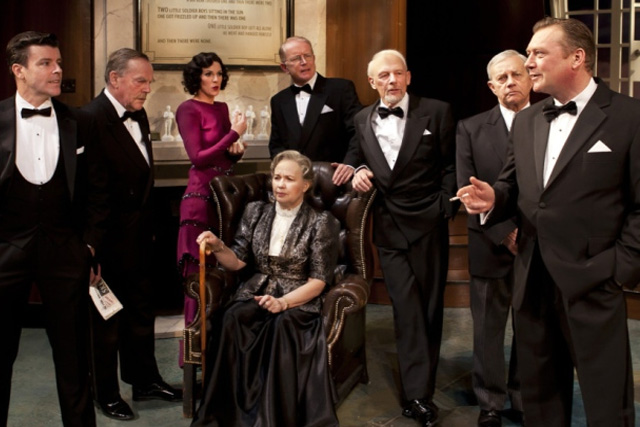 Frazer Hines (second left) as Rogers in And Then There Were None.

Frazer Hines has been performing for sixty years on stage and screen. His work has taken him from Doctor Who and Emmerdale Farm to movies with Charlie Chaplin.

This month he appears in Agatha Christie’s And Then There Were None at Leeds Grand Theatre. As one of Yorkshire’s sons returns to Leeds, we speak to him about his role in the show, reflecting on the past and looking to the future.

Frazer, how are you?

Great thank-you. We were sitting out in the sun but now it’s cloudy so we’ve had to put a coat on. You sit out in the sun to have a nice bit of lunch and it suddenly becomes cold!

Really? Well, we’re better off here then, for now.

More reason to spend a night in the theatre. What should audiences expect from And Then There Were None?

We’ve been packing them in wherever we’ve been; Stoke, Wolverhampton, Dublin, everywhere we’ve played. Agatha Christie is so popular, we’ve had excellent reviews. The show has ten famous television and theatre performers gelling together in a fantastic play. There are no divas, nobody trying to hog the stage, everybody is just so perfect in their own roles.

Is there anyone in the cast you’ve particularly enjoyed working with?

It’s the whole ensemble, but if I was to single one person out it would be Verity Rushworth, because she’s great fun. We’re both ex-Emmerdalers, so that was great.

What do you believe you’ve brought to the role of Rogers?

I suppose it’s my experience of being in the show business for over forty years that many could assume that Rogers, being just a butler, could be played just as a butler. But I worked out that he was in the First World War, in the army, so he has this straight-backed walk and respects the general in the play and respects the copper. So I’ve brought those little nuances into the character.

Leeds Grand Theatre is the perfect venue for a classic Agatha Christie play. Is performing in Yorkshire like coming home?

I was supposed to finish in Newcastle about two weeks ago and then I realised that the next leg included Leeds. I rang the producers and said, “Look, I know I’m leaving, but I notice you’re doing Leeds. Shall I stay on and do it?” They said, “Yes, it would be great if you could do Bury St Edmunds, Dublin, Leeds and then finish in Cambridge.” I said yes as I hadn’t worked at Leeds Grand Theatre for near enough twenty years. I worked with Judy Carne the last time I was there in a show called Happy Birthday. So yes, I’m looking forward to coming back to Leeds as a Yorkshire lad.

You’ve done a lot of work in Leeds, most famously as part of the original cast of Emmerdale. What was behind your decision to leave the programme after so many years?

Well, I’d just got to the point that I’d got married and I lived quite far away. I was getting up early, it was dark in the morning. I’d come home, it was dark at night. My wife would say, “Oh you should have seen the foals, they were running around.” Then I’d have a quick TV dinner, learn my lines and go to bed. I’d wake up in the morning, on this same treadmill, not enjoying any of it at all. I wanted to get to doing more theatre, different television and things, so I went back to my roots.

This included the writing of an autobiography.

The first book was Hines Sight and my second one came out last year called Fifty Shades of Frazer. Hines Sight had quite a lot of photographs and people commented on the pictures. I’ve got loads of photographs in my garage, so it was suggested I do my life story in pictures. So I got all these photographs together of me as a little boy growing up, then into the Corona Theatre School, and up to the modern day. It was A Life In Pictures.

That’s interesting as somebody you famously worked with, Charlie Chaplin, published My Life In Pictures as his second autobiography.

Did he? I didn’t realise that. That must be something right in the back of my memory because, yes I worked with Chaplin when I was about ten years old.

That’s quite an accolade.

It’s a great showstopper when you’re chatting with people over a meal and they start talking about Laurence Olivier and John Gielgud and I always say: “Oh Charlie Chaplin once said to me…” and they say, “What!” as their knives and forks are dropped on the table. Somebody reminded me the other day that I must be one of the few actors still alive today who worked with Charlie Chaplin. It’s really something to dine out on. I love it. I really love it.

What’s the question that most people tend to ask when they meet you?

And what’s generally the answer?

Oh. A lovely man. Some of the happiest years of my show business career were working with Patrick Troughton in Doctor Who. But they all ask me that and I wish I had a pound for every time I’m asked that question. He was a lovely, lovely man and we had great fun working together. If I had an idea he wouldn’t say, “I’m the Doctor, you just shut up and be the assistant.” He’d turn and say, “Frazer, what a marvellous idea. Let’s do it.” I’d worked with him before in 1964, before Doctor Who had started and I was the star of that show, Smuggler’s Bay, and he was playing the part of an old smuggler. But a year or so later he was the star of Doctor Who and I was just joining in as Jamie for four episodes so the role was reversed. It was great, we just gelled straight away.

You were with Patrick Troughton for the rest of his time on Doctor Who.

Drama series were shot very differently in the Sixties, weren’t they?

Yes. We’d rehearse Monday through to Thursday, followed by a camera run on the Friday, break for supper then record the show Friday night, more or less as live from page 1 to page 45. But nowadays they do all the TARDIS scenes first, then all the location scenes and monster scenes. All separately, totally differently. In a way the BBC were quite lucky that most of us were brought up on theatre so we were used to doing 45 pages with long scenes, whereas actors today who haven’t done a lot of theatre would be flummoxed in that situation.

Two almost complete serials of Doctor Who turned up last year, unseen for decades. That must have been an interesting experience.

It was amazing. When Deborah Watling and I watched them at BAFTA we sat back and thought, “The last time we saw these was when they actually went out over forty-five years ago.” It was just amazing to watch something back which you hadn’t seen for forty-five years. My performance? I wasn’t bad. Considering the pressure one was under – there were no retakes, only retakes for camera problems or a boom in shot. If you watch them now you’ll notice a fluff in the lines but I always tell fans not to freeze frame it or say there’s a crack in the wallpaper there, or you can see the Dalek has tripped over. Just watch it as we did it, as live television.

What’s the key to your enduring success in show business?

I don’t know really. I suppose the old thing is learn the lines and don’t trip over the furniture. But I’ve been fortunate to star in two of the longest-running television shows in England; Emmerdale and Doctor Who. Not many actors can say that, and people often ask me if I get bored talking about it but I say no, because those two shows got me where I am today. It’s got me on the bill in a theatre in Dublin. If it hadn’t been for those shows I’d still be walking the streets of London waiting for the phone to call.

Do you have anything lined up after the show, or ambitions for 2016?

I’ve got a television production company called Snowball Productions and my partner and I have two shows we’re trying to get off the ground. One’s a black comedy and we’ve got people at ITV looking at it. I’d like to sit behind the camera for a while. Having been in front of the camera and on the stage, it would be nice to walk onto the set with a big cigar and perhaps say, “Hello folks, I’m your producer, are you earning me money?” That sort of thing! I’ve also got a couple of Doctor Who engagements in New York and Los Angeles and a cruise, so a show I did all those years ago is still earning me money which is nice to say!

Frazer and I briefly discuss where the finest steak and ale pies are to be found in his birth town of Horsforth, before he prepares for another night of And Then There Were None at the Bord Gais Energy Theatre in Dublin.

And Then There Were None is at Leeds Grand Theatre from Monday 17th to Saturday 22nd August. Tickets are still available priced from £18.50 to £35. Book online at leedsgrandtheatre.com or call Box Office on 0844 848 2700.