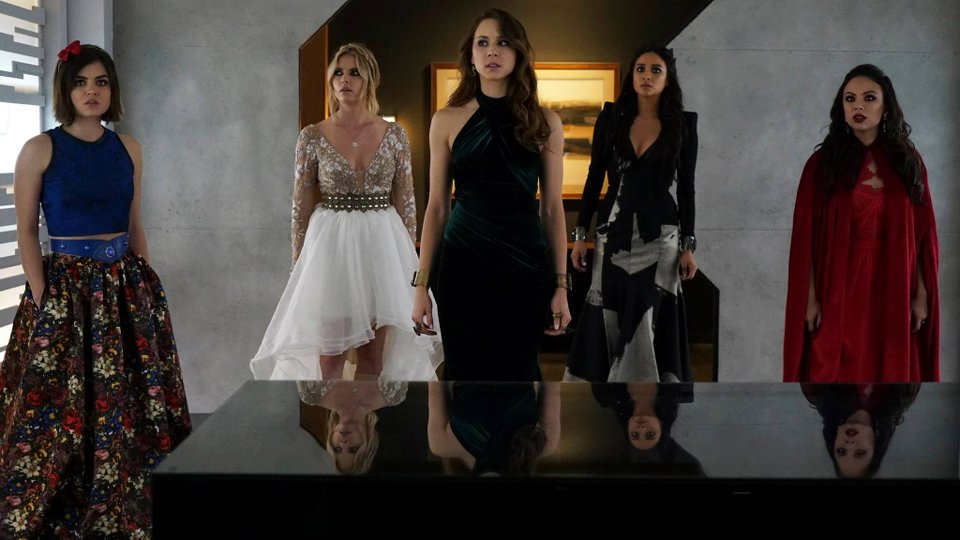 Pretty Little Liars made good on its promise and delivered most of the answers to the show’s biggest mysteries during its summer finale.

Alison (Sasha Pieterse) was shown to be alive and well and in a cell at Radley. As she locked outside of her cell she saw her father (Jim Abele) seemingly dead on the floor and viewers saw Jason’s (Drew Van Acker) body being dragged. It was later revealed that neither were dead, just sedated like Mona was when we saw her ‘death’.

After teasing the liars coming face-to-face with A on a rooftop, the action jumped back to earlier in the evening. As the liars theorised where Alison might be, they bumped into Mona (Janel Parrish) who was wearing a disguise and tracking Alison. Turns out Mona had been hacking into Ali’s phone and discovered that A had his own cell network that was controlled from the Carissimi Group. Aria (Lucy Hale), Spencer (Troian Bellisario), Emily (Shay Mitchell) and Hanna (Ashley Benson) along with a reluctant Sara (Dre Davis) slipped out of the prom and headed to the Carissimi Group offices.

Once inside they ran through a variety of possible passcodes to get into the locked room Hanna and Spencer had seen a couple of episodes back. After trying important DiLaurentis dates, Sara offered a date that she believed meant something to Charles. The door opened and the girls found themselves in a small room. As they looked around confused a wall panel opened up and the girls entered into a secret room. Sara refused to go with them and the door closed locking the liars and Mona in.

The girls realised quickly that they were being watched and turned on a screen that showed Ali in a Radley cell. They then saw that she was locked in there with A.

The revelations came thick and fast during the episode as soon as it was revealed that A was CeCe (Vanessa Ray) aka Charlotte aka Charles! That’s right folks, CeCe Drake was the real A and she was the one behind all of the liars’ torment the past 6 seasons. But isn’t Charles a boy we hear you asking? Stick with us and we’ll do our best to explain it all.

It turns out that Charles was a little boy who was put into Radley by Kenneth and Jessica (Andrea Parker) after they thought he had tried to drown Ali in a bath when she was a baby. Actually he was just trying to make his sister feel better and his intentions were good. Once at Radley Charles befriended Bethany Young, who was anything but the innocent young girl we all thought she was. Charles had started to ask his mother if he could dress like a girl prior to going to Radley, something that Kenneth wasn’t happy about. Mrs D. bought a duplicate of all of Ali’s dresses and gave them to Charles whilst he was in Radley. One night Charles was dressed in one of Ali’s dresses on the rooftop of Radley with Bethany. Toby’s (Keegan Allen) mother, who was also at Radley, arrived on the rooftop and Charles was worried about being seen in a dress. Bethany said she would take care of it and she wasn’t kidding – it was her that pushed Toby’s mum off the roof!

Fast forward a few years and Charles was now fully identifying as a girl known as Charlotte. Mrs D. helped Charlotte live as the person she wanted to be and faked Charles’ funeral so that Kenneth and the rest of the family didn’t know that Charles was now Charlotte. Not only that, Mrs D. helped Charlotte get out of Radley by getting her a place at a university so she could start a new life away from Rosewood.

In a creepy moment we were reminded that CeCe aka Charlotte had briefly dated Jason, which she claimed she did purely to keep close to her family. Jessica found out and was furious that Charlotte was close to being found out. Kenneth invited Charlotte on a family holiday with them much to Jessica’s dismay.

Back to Bethany. The disturbed young lady had privileges allowing her to temporarily leave Radley. Charlotte feared that Bethany was going to hurt Mrs D. so when she caught a glimpse of her outside the DiLaurentis house she hit her in the head with a rock. The only problem was it was actually Ali she hit as Mrs D. looked on in horror. Desperate to cover up for Charlotte, Mrs D. buried Ali not realising she was still alive. How did Bethany end up in that grave? Turns out Mona killed her thinking she was attacking Ali.

Mrs D. paid off Detective Wilden (Bryce Johnson) so that Charlotte wouldn’t get in trouble for the murder of Toby’s mum (as Bethany had placed the blame on her). Charlotte then befriend Mona in Radley and used her to get information about the liars after thinking they were happy that they thought Ali was dead. That seemed to be her sole motivation for the hell she put them through.

Believing that Ali was still alive, Charlotte put the liars’ lives in jeopardy (we all remember the house explosion right?) to draw her out. She used Red Coat as an Ali decoy and it turned out that Red Coat was really Sara! Those who suspected Sara was dodgy were absolutely right as she was also Black Widow and the person who murdered Wilden.

Charlotte then left Rosewood following the death of Shana (Aeriel Miranda) but couldn’t stop tormenting the liars and her sister. She also revealed that she found Mrs D’s body the night she was murdered but it wasn’t her that murdered her. Who was it then?

Playing the ‘A’ game

The liars managed to break out of the room they were trapped in but Mona wanted to stay behind to hear the end of the story. During Charlotte’s revelations they saw Red Coat seemingly planting a bomb in Radley so they rushed there to try and rescue Alison. On arrival Red Coat was revealed to be Sara and she was actually helping the liars not working against them this time. Emily was so full of rage that she punched her in the face.

Ali then appeared telling the liars that Charlotte was heading to the roof. They all ran up there and Charlotte looked set to jump. She didn’t however, instead climbing back down onto the rooftop and admitting that the game was finally over.

Once the drama with Charlotte was resolved the liars said goodbye to one another as they went their separate ways. Ali seemed to be the only one who stayed in Rosewood. The action then jumped 5 years into the future and Alison was now a teacher going under the name Mrs Rollins. She was interrupted by the liars who told her that ‘he’ was coming for her. Who is that ‘he’ we wonder? We won’t know until the show returns next year.

Pretty Little Liars returns to ABC Family in the US and Netflix in the UK in 2016. Preview the show’s winter premiere below: