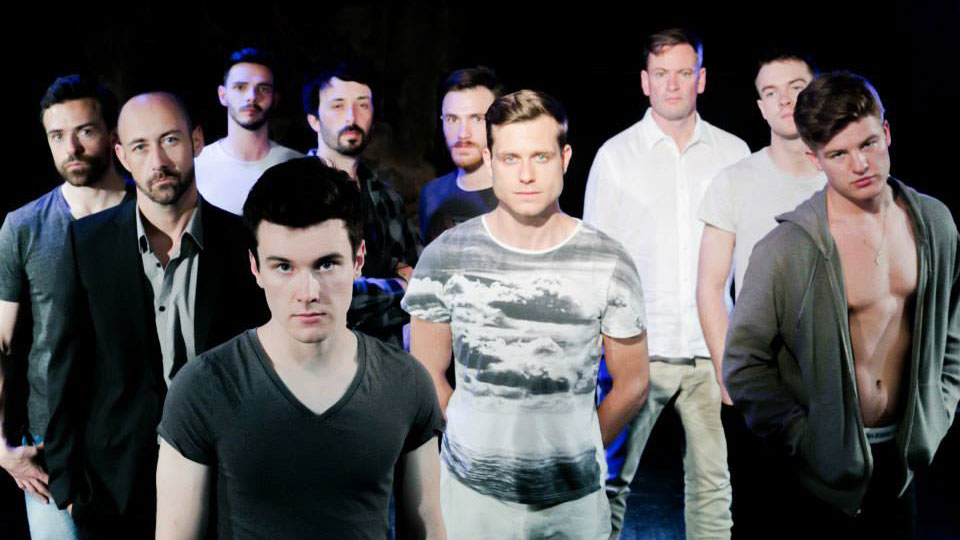 The aptly-titled F*cking Men is a cracking comedy that follows the intertwined lives of ten gay men. The episodic story follows in snapshots significant sex-related moments in the men’s lives, with a rapid sequence of duologues.

As a bold, sexy and wittily-observed comedy, F*cking Men has a lot going for it – but let’s be frank – a sizzling hot cast stripping off will also get bums on seats. And there’s nothing wrong with that! F*cking Men makes no pretensions about what it is. It’s cheeky (very cheeky), vibrant and unapologetically alluring. Behind its plucky persona, Joe DiPietro’s play is also layered with a disparate cast of interesting and believable characters. Most gay men will relate to at least one scenario, and there will be wry chuckles about quickies in saunas and the challenges of monogamy in long relationships.

Director Geoffrey Hyland does a great job of keeping the pace up and the sequence of duologues snappy – but he also brings terrific performances out of his cast, and there’s space and time for character development even within a dozen or so short scenes.

Darren Bransford is a lot of fun as a pretentious playwright, and his deliciously (and very deliberately) exaggerated performance offers plenty of laughs per minute. We were surprised to learn that this production is Jonathan McGarrity’s professional London stage debut, since he’s excellent in the part of a tortured married man, aware of his husband’s infidelities and their increasing sex droughts, who is conflicted about whether or not to commit similar indiscretions. His chemistry with Richard DeLisle as his husband is completely believable, as is his scene with Euan Brockie, who offers a neat contrast to the uptight McGarrity as an adorably slutty student.

It’s Harper James who creates possibly the most intriguing character in the show – the ‘straight’ soldier, who pays a male escort as a ‘one-off’. The latent self-hatred and denial is brilliantly brought to the surface, and the anger in his anguish is palpable. Nevertheless, James finds ways to redeem his character, and the nuances of his relationship with Chris Wills’ escort do the job of drawing the audience in to the world of the play and hooking them from the start.

In fact, we found the biggest downside of F*cking Men is – as with so many episodic pieces – once you invest in certain characters you have to discard them and allow the next story to take your attention: and it’s likely that not every scenario will grab you. On the flip side, there’s likely to be something for everyone. Unlike many other dramas crafted in this way (and to its credit) F*cking Men doesn’t overly rely on coincidence to string the stories together. This makes it even more satisfying when characters do return, and we find out a bit more about them, but from another angle. We adored Chris Wills’ scene with Richard Stemp, and the fascinating mixture between rich, closeted and famous older journalist and impoverished young male escort.

With so many short scenes, transitions are always going to be tricky, and the snatches of future conversations linking scenes feel somehow intrusive. The device is better than leaving the audience coldly enduring many set changes, but perhaps a more inventive way to distract us could have been sought.

Overall though, the show is unrelentingly entertaining and manages to say more about life for gay men in an hour and a half than many other gay-themed dramas put together. The hot and talented cast create  and sustain great drama and F*cking Men makes for a memorable evening’s entertainment. It’s a must-see for gay men who love the theatre (and that’s all of us, right?).