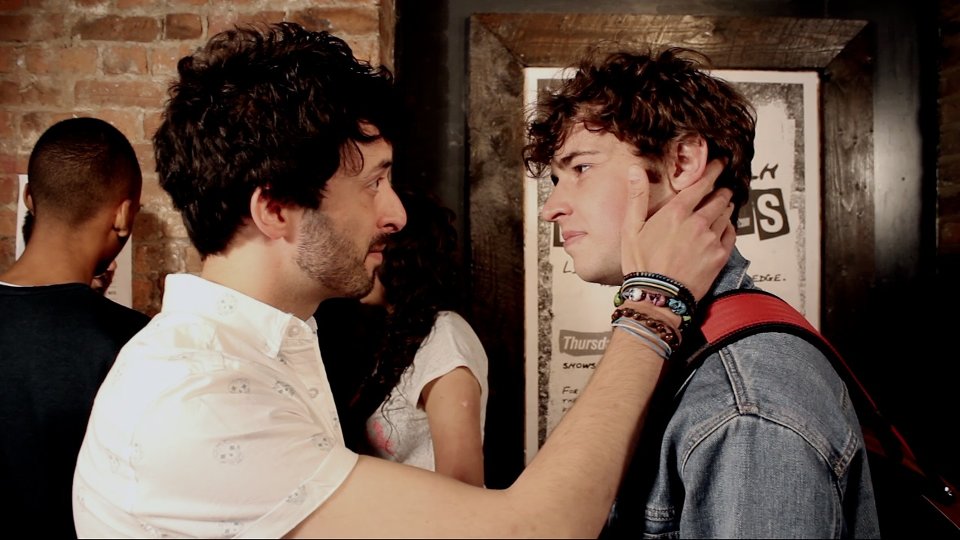 Aspiring musician Nate (Brennan Reece) is trying to find his independence, which is hampered when his two feisty sisters crash into his life. As if that wasn’t enough to content with, Nate’s eye is caught by new neighbour Jonny (Darren Bransford) but he’s reluctant to explore the romantic possibilities. Nate’s desire for Jonny and his attempts to deal with his sisters conflict and it soon becomes clear that the path to true love is anything but smooth.

Three in a Bed is the third film from emerging writer/director Lloyd Eyre-Morgan. It follows 2013’s Dream On and 2014’s Celluloid continuing to explore themes of sexuality and family. At the heart of the movie is a coming-of-age story with Nate trying to find his place in life. The struggle between family responsibility and love is one that many of us can relate to, and we’re sure that the core audience for this movie will be able to identify with Nate.

The movie would have benefitted from a more streamlined storyline. The distraction of the sisters causes the movie to lose focus and Three in a Bed could have been an engaging story of burgeoning love. Instead it’s under-developed in places trying to do too much and not really fleshing out much of anything. The main storyline feels rushed and because of that the timeline of events doesn’t ring true. You aren’t given enough of a hook to emotionally invest in the characters so you don’t really care what happens in the end.

The acting in the movie provides quite a spectrum from good to amateur. Thankfully the two leads – Darren Bransford and Brennan Reece – are the strongest actors in the movie. They don’t share nearly enough screen time considering their romance is at the heart of the film but when they do the movie comes into its stride and gives you a glimpse of what could have been. They create a nice chemistry together but the rushed feel of the plot doesn’t allow for much in the way of character development.

Three in a Bed is a decent effort but its downfall is trying to do too much. A stronger focus and more time on the central characters could have elevated this movie from watchable to something quite special. We understand that on films such as this that budget is always a restriction but the wide variety of acting is disappointing making the film feel much more amateur than it should.

Watch the trailer for Three in a Bed below: