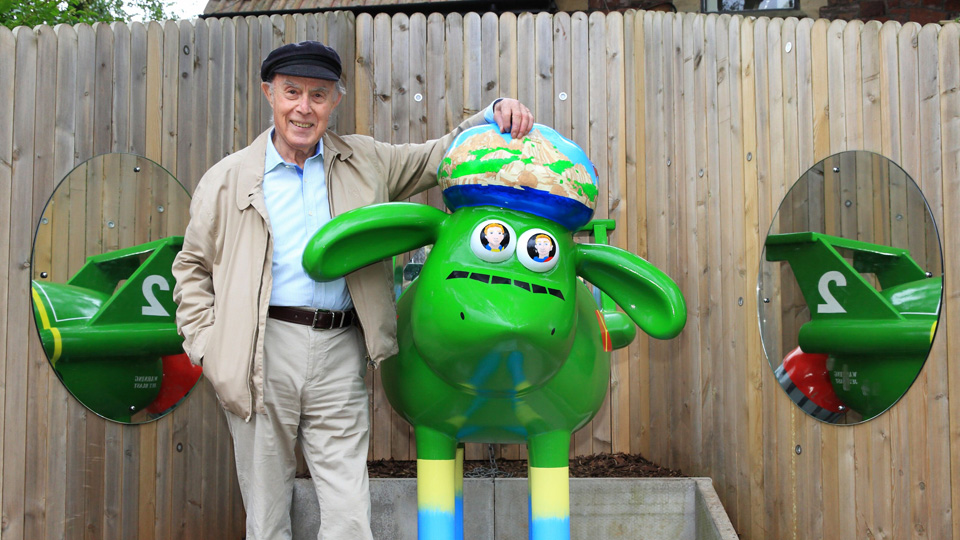 One of the stars of Thunderbirds has touched down in Bristol to pay a visit to the Shaun in the City sculpture, inspired by the series.

The design of the statue is one of 70 sculptures of Aardman’s Shaun the Sheep currently installed all over Bristol as part of the Shaun in the Cit’ trail, organised by The Grand Appeal. The flock will be on display until 31 August before being auctioned later this year to raise funds for Bristol Children’s Hospital.

David Graham said: “I was very excited to hear that a Thunderbirds design had been created as part of this trail and am delighted to have been able to come to Bristol to see it in person. I think Shaun looks F.A.B Just like Thunderbirds, Shaun the Sheep is loved by all ages, and it’s great to see the two brought together for such a brilliant cause. I hope fans of Thunderbirds and Shaun the Sheep enjoy visiting the sculpture this summer, and help to raise money for Bristol Children’s Hospital.”

Nicola Masters, director of Wallace & Gromit’s Grand Appeal, added: “The ‘Shaun in the City’ sculptures have seen Shaun the Sheep given a number of different disguises, from pirate to steam train and now space ship! We were so pleased to welcome David to Bristol to visit “Thunderbirds Are Go! Our Bristol trail has been incredibly popular so far, welcoming thousands visitors from all over Bristol, the south west and beyond. We have already given away more than 150,000 official trail maps and our ‘Shaun in the City: Sheep Spotter’ app has been downloaded over 60,000 times. It is so rewarding to see so many people enjoying the trail we have put on in aid of Bristol Children’s Hospital.”

In similar news, classic Thunderbirds featuring David Graham is to return thanks to the UK’s most popular crowd sharing Kickstarter for a film production. The funding project ended in success this week, with the promise of three new episodes to be produced using the traditional pioneer effects work known globally as Supermarionation.