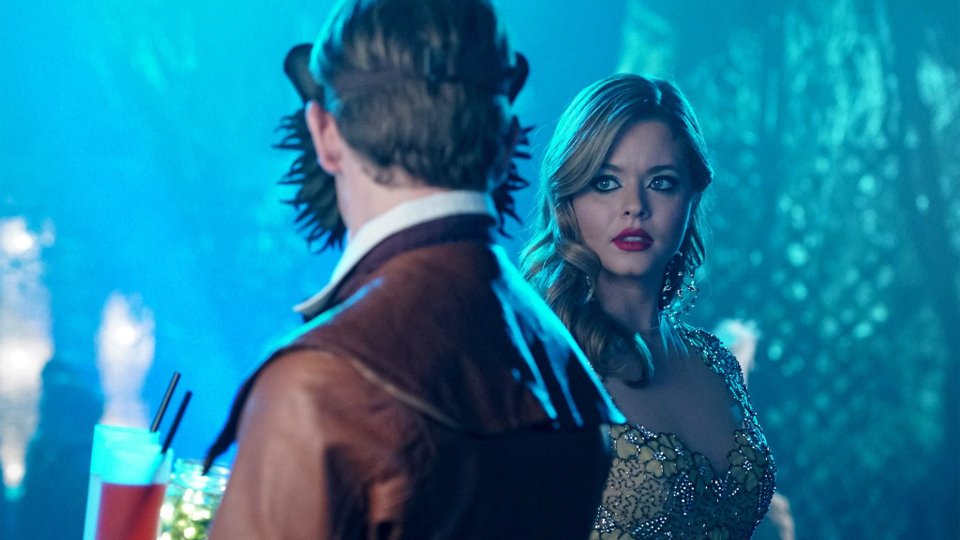 One of the liars came face-to-face with Charles on this week’s all-new Pretty Little Liars.

If you haven’t seen the latest episode of Pretty Little Liars and want to avoid spoilers then we suggest you stop reading now. If you have seen it and want to relive the action then keep reading.

Aria (Lucy Hale), Spencer (Troian Bellisario), Emily (Shay Mitchell) and Hanna (Ashley Benson) were less than thrilled when they were informed by their mothers that they had been uninvited to their own prom AND graduation. The school board believed that the girls’ attendance could endanger the lives of the other students so they were expressly forbidden to go. Instead Veronica (Lesley Fera) teamed up with the other moms to organise an intimate prom night celebration in the Hastings’ barn.

As celebrations got under way in the barn, the liars became increasingly worried about Alison (Sasha Pieterse) when she didn’t show up. What they didn’t know is that Ali had been in communication with Charles and was planning to sneak into the real prom in order to finally come face-to-face with him. After searching through social media to see pictures from the prom they couldn’t attend, the liars found a picture with Ali in the background. Along with Ezra (Ian Harding) and Toby (Keegan Allen), the liars slipped out of the barn and headed straight to the prom.

Upon arrival Aria confronted Clark (Titus Makin Jr) but didn’t get any answers, and Alison gave her friends a pretty frosty reception. Spencer refused to give up trying to protect Alison until the two girls had an intense exchange where Ali accused Spencer of never really liking her. The girls decided to partner up on the dance floor where they could enjoy the prom and keep their eye on Ali. Spencer and Toby had a heart-to-heart, which led to a smooch and losing track of Ali.

The liars and their partners banded together to search the prom for Ali but they failed to find her. They did however find Clark who revealed he was an undercover police officer who was working on the Charles case. Minutes earlier Ali had crept off into a quieter part of the prom where she was confronted and kidnapped by Charles. As the liars found her phone on the floor near a smashed mirror, Ali finally came face-to-face with Charles and it seemed that she knew exactly who he is.

Whilst the liars were (pretending to be) in the barn, their moms got together for a gossip and (lots of) wine. Ella (Holly Marie Combs), Ashley (Laura Leighton) and Pam (Nia Peeples) joined Veronica so they could keep an eye on the girls. That quickly got forgotten when Veronica got drunk and revealed all about her husband’s infidelity with Jessica DiLaurentis (Andrea Parker). After dropping that truth bomb, Veronica found the courage to storm over to the DiLaurentis house to confront Kenneth (Jim Abele) but found the house empty. The other moms accompanied her, reluctantly, and they decided to have a search around the house for clues. Veronica found a picture of Jessica with Ali, Jason (Drew Van Acker) and Charles, but they were interrupted when Rhys (Caleb Lane) arrived at the house. Stunned by his familiar looks, the moms made their excuses for being in the house and tried to turn the tables on Rhys to find out why he was there. He explained he was part of the Carissimi Group and that he’d come to see Kenneth, who it turns out wasn’t in the house.

After Rhys left Ella suggested that they had just been face-to-face with Charles and the moms continued their search of the house. Veronica led them down to the basement after they heard noises and as soon as they walked down the steps the door slammed and locked behind them. Ashley tried to climb out through a tunnel in the basement but failed and the moms were left panicked and stuck in the DiLaurentis basement.

There was a bit of time for some more future planning on this week’s episode for the liars. Aria found out that she had won first prize in the photography competition after the judges finally saw her photos. That means she’ll be heading to L.A. for the summer for an internship. Aria mistakenly thought Ezra was trying to follow her there after seeing a flight reservation on his phone, but found out he was actually going to Thailand to do humanitarian work.

Caleb (Tyler Blackburn) went to New York to ‘see his dad’, whih turned out to be a job interview so he could move to New York and take Hanna with him. The truth came out when he surprised her at prom and assured her he could financially support them both so she could continue her education.

Emily and Sara (Dre Davis) continued to explore their relationship, and Emily was disappointed when Sara told her she couldn’t attend prom with her. When the liars arrived at prom, Sara was already there waiting and told Emily she chose what was most important to her.

Spencer tried her best to convince Lorenzo (Travis Winfrey) to give Ali another chance after he was indefinitely suspended from his job. He refused but eventually came round and attended the prom to help the liars keep Ali safe.

Tune in to ABC Family at 8/7c on Tuesday in the US and Netflix on Wednesday in the UK to see the episode. Preview the mid-season finale Game Over Charles below: