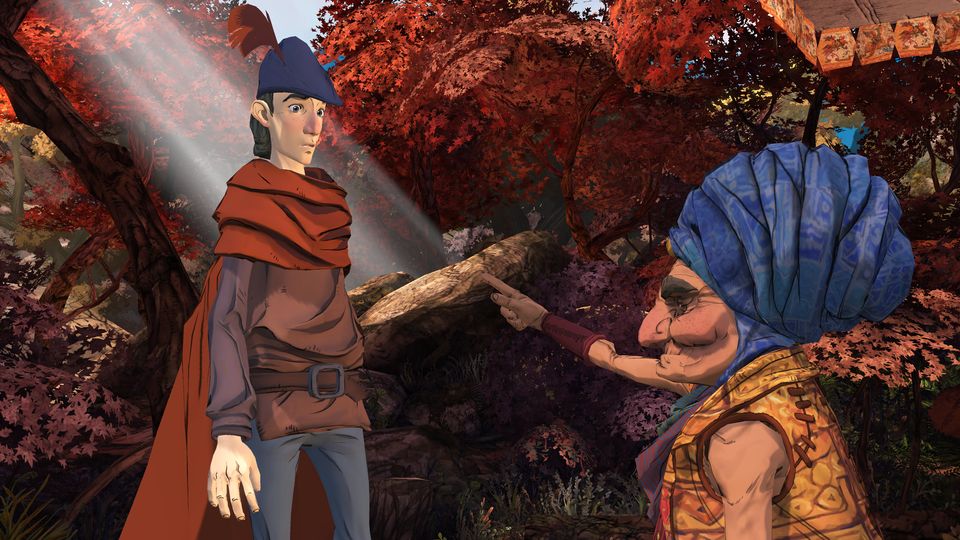 Recently we seem to be swamped with remakes and remastered editions of games. King’s Quest is one of the oldest game series around and first appeared in the early 80’s with the eighth and last instalment released back in 1998. This has led developers The Odd Gentlemen to re-imagine the game using the latest technology while trying to keep the spirit of the originals alive.

Younger gamers won’t remember the King’s Quest series but many older gamers will still have fond memories of the hours spent tackling the adventures. While they were some of the most cutting-edge games at the time of release if you go back to them today you’ll probably find they seem a bit rubbish.

The new game has been simply titled King’s Quest but has been split up into five chapters. The first chapter is called A Knight to Remember and starts with a short quest which acts as a tutorial of sorts while you get to grips with the game.

The game is once again set in the Kingdom of Daventry and the main series protagonist King Graham returns. Here he’s an old man, voiced by the wonderful Christopher Lloyd (Back to the Future), who appears to be bedbound with ailing health. He spends his days recounting stories of his old adventures to his enthusiastic granddaughter Gwendolyn. In the opening quest he tells a tale of when he was a young knight on a quest for a magic mirror which involved facing a monstrous dragon.

The main story for this first chapter is set at an earlier time before Graham became a knight or king. He finds himself competing with a group of knights where he must tackle tests of chivalry, strength and speed. The top two after the challenges are complete will then go head-to-head in a test of wit.

On PC the game can be played with Mouse and Keyboard but it has really been designed to be played with a gamepad. Having tried both methods the gamepad is definitely the best way to play. Graham can be moved around the world using the left analog stick. On an Xbox controller the A button is used to perform actions while the X button opens your inventory. Items of all shape and sizes that Graham acquires are stored in his cape.

The action is mostly viewed from a third-person perspective and the camera tends to be fixed in each location. Some action sequences switch to a first-person view such as when you need to use a bow and arrow. Other action sequences also rely on dreaded Quick Time Events but fortunately they work pretty well here.

As you’d expect from the genre much of your time is spent solving puzzles. We didn’t struggle too much with these and most can be easily solved with a little patience and common sense. We liked that the game doesn’t always keep the player trapped in a single location while you solve a puzzle.

Occasionally you might fail or do something wrong, such as activate a trap which seemingly results in the death of young Graham. However as he is telling the story he obviously didn’t die so the game will poke fun at what happened before letting you retry.

As the adventure progresses you spend a large amount of time walking back and forth between the various locations. The occasional shortcut opens up and some areas are quicker to move through after you have done them once. There’s no map to be found though or quick travel option. Some players will probably want to draw out their own map to keep track of things. The walking around does pad the game out a bit and eventually gets a little annoying.

Along the way there are many fantastic characters for Graham to meet and just like old King Graham these all have great voice acting too. They also all bring a lot of humour to proceedings and King Graham in particular is a huge fan of puns. It’s a lot of fun and we found ourselves chuckling along at times.

Graphically the game is lovely to look at with gorgeous painted scenery. The characters have a cartoonish like appearance and are well animated which really brings them to life.

We had a few minor niggles beyond the back-tracking which included a couple of crashes of the PC version. We also felt that the tutorial quest could have done a better job of teaching the player. The most frustrating issue we had is when you speak to a character or inspect an object for a second time and you have to sit through the same dialogue again with no option to skip.

A Knight to Remember is a strong start to the new King’s Quest series that is sure to delight old and new fans alike. It’s also a generous first chapter that will keep most players busy upwards of six hours. If the developers can keep things interesting and continue the same level of quality for the remaining episodes they could have a real winner on their hands. This is one adventure well worth taking and we look forward to the next chapters.

Players wanting to try out the game can pickup the first chapter now for £7.99 and then add the season pass on later for £23.99. Alternatively you can opt for the complete collection for £31.99 which includes access to all five chapters and a bonus epilogue as they become available.