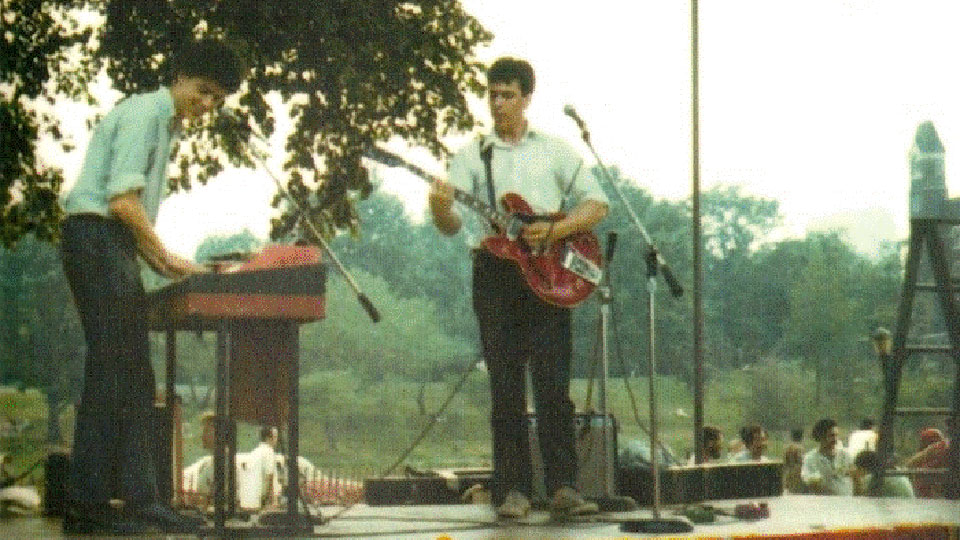 They Might Be Giants have been together since 1982. They Might Be Giants have released a whopping seventeen studio albums and they have two Grammy Awards to their name. Continuously innovative and continuously adding new strings to their bow, the band are always growing and expanding in terms of what they focus their attention to and they are always looking for their next challenge. The group are best known for their rather unconventional and experimental style of alternative music. They have had an incredibly diverse career to date and always seem to remain fresh.

This year, they relaunced their Dial-A-Song project and recently launched their latest album, Gleam. The idea was to release one new song every week for the entire year, beginning with the track Erase, which was released back in January. Several of these songs have been collected on a new studio rock album entitled Glean, which was released on April 21. That sounds like a great challenge to us and we sometimes wonder where they have time to fit everything in.

They don’t often seem to visit us here in Europe, but when they do, it’s a real treat! Let’s hope they don’t leave it so long til they are back next time. They are such interesting characters and we loved finding out more about them. Here is our interview with They Might Be Giants or TMBG, if you’re feeling lazy!

Hi guys, welcome! How are you doing today?

Things are good! I’m going to see a performance of Harry Partch music tonight so I have to clean myself up. Trying to shake off the jet lag from our promo visit in London. Still bobbing and weaving a bit.

What do you like the most about visiting London?

We have friends we socialize with and it’s always a fun and festive time. It’s also very interesting catching up with the UK view of the world scene. Not only do you hear details, for instance regarding the whole EU situation, you come to understand a more basic idea about things that are really lost on our news media.

This year, you reactivated your Dial-A-Song service promising to release one new song every week for the entire year, beginning with the track Erase. How has that process and project been for you?

It’s been great. Along with just keeping up with all the songwriting and recording, we have the additional collaboration with an amazing group of video makers and animators. The visual component makes it extra fun.

Why did you choose to relaunch that project this year?

We probably could have gone after more advertising work or made music for television shows, but to be candid it’s a bit more pleasant to be your own boss.

Several of these songs have been collected and put on to a new studio rock album called Glean, which was released in April. Are you happy with the reaction that the album received?

It has gotten a lot of positive reviews, which are the only reviews we believe.

What are your personal favourite songs off Glean?

Oh, we like them all. Remember, the songs can hear us talking!

I liked it all, but it takes a lot of time. The writing process is kind of sprawling, with a lot of rejected material and explorations that just as often peter out as click. Our recording sessions are the opposite, very planned out and probably a bit intense by some standards. We have never been much for lounging around in the studio and the calibre of players we are working with keeps us focused. After preparing material for weeks in advance, the actual tracking sessions are not too many days in a row. Since they involve all five players in the band along with the engineers and producer, it’s a big day when we are recording. But it’s as much fun as is intense. Lots of joking around and excitement making something new.

You’ve been together as a band for so long, how do you keep your working relationship so fresh?

Well, doing new work probably has something to do with it. And having a fair bit of success together certainly makes things easier.

What do you like the most about performing live? Do you think that European and American audiences differ?

It is fun just to play and we’ve been doing it so long, that we don’t really get nervous, so it’s easy. We haven’t been back to Germany for a while, but those audiences were notably different —very much keyed in on language, so it was almost like a delay on their response when the song ended and then they’d be very positive and animated. UK audiences also tend to treat our show like a concert, rather than a show. In the US, there is a fair bit more dancing, but I guess they do get to see us more frequently so they just get into it faster.

You’ve had an incredible career and a very interesting one at that, full of creativity. What has been some of the highlights for you?

It has gone by very quickly, it’s been a real “earn as your learn “experience for me. I couldn’t really sing and play the guitar at the same time so well, when we started! The photo (as above) is of of us at our very first show, it was at a Sandinista rally in Central Park. That was a good start. But highlights? There are a lot. Awards are easy to enjoy. But really getting to write a lot of songs, make recordings, getting to work in real studios with great musicians has been fascinating.

Tell us about creating music for the television series Malcolm in the Middle. What kind of challenge was that for you?

It was not the easiest gig for us. The show was instantly a big hit and there was a lot of pressure at every level. We also had to deal with a fair bit of rejection, which was new to us. I don’t think we really knew how to manage our time very well, and consequently we couldn’t work fast enough to keep up with the show. To do incidental music for a television show, it probably helps to be an improvisational virtuoso. Alas, we are not.

Tell us what your plans are for the rest of the summer?

I’m going to swim every day and grill every night!

What are your goals for the rest of the year?

Advertisement. Scroll to continue reading.
In this article:Dial-a-Song, Glean, Malcolm in the Middle, They Might Be Giants