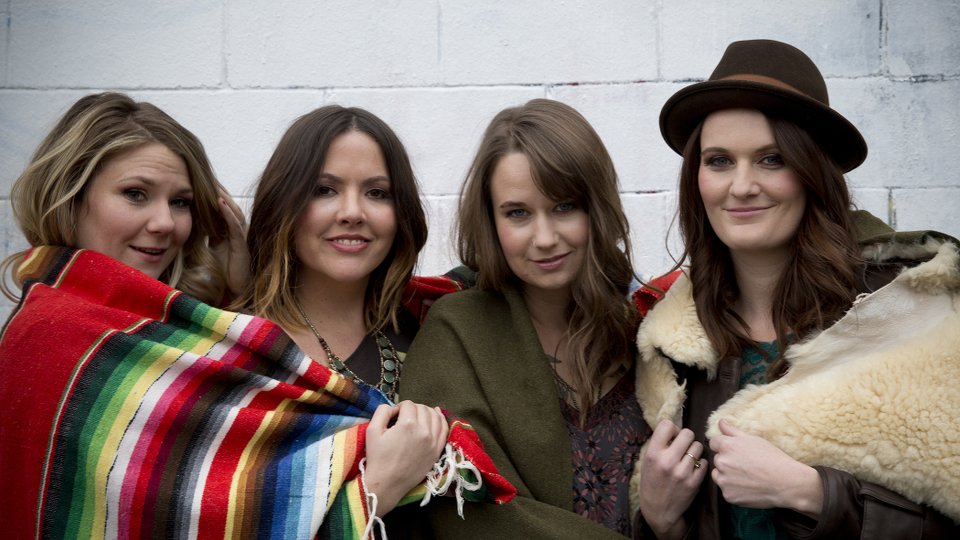 Nashville Americana band Della Mae is currently in the UK playing a series of live shows in support of their recently released self-titled third album.

Released via Rounder Records, Della Mae has picked up widespread critical acclaim and has been a huge hit with the band’s fans. The album was recorded with producer Jacquire King, an iconoclastic sonic visionary who’s won Grammy awards for his work on such landmark albums as Tom Waits’ Mule Variations, Norah Jones’ The Fall, Buddy Guy’s Blues Singer and Kings of Leon’s Only By The Night.

We caught up with the ladies of Della Mae to talk about their new album, find out how their UK tour is going, and to discuss how the band came to be.

Hello ladies! How are you today and where does this email Q&A find you?

Hello! We’re having a great day. We woke up in Leicester, had breakfast with some friends of ours from Switzerland, played some music at a ruined castle in Berkhamsted, and are now driving down to Heathrow airport to catch an early morning flight to Lyon. Sometimes we wonder how our lives got so crazy!

You’re in the middle of your UK tour. How’s it going so far and what have the audiences been like?

So far we have played three shows – a festival in Newcastle, a show in Oxford and a show in Leicester. The venue and festival staff have been very hospitable, and the audiences have been enthusiastic and appreciative. We are also constantly amazed at the good food and beer that we get to taste daily. We couldn’t ask for anything more!

Do you notice a big difference between audiences in different countries? If so where is your favourite place to play live?

We notice small differences, like which audiences are keen to applaud after solos and which ones like to get up and dance or which ones prefer to listen attentively. But everywhere we have travelled, we’ve been received with enthusiasm and love. We’re grateful for that!

You released your third album back in May. How has the reaction to the album been?

The album has been received with open arms by both press and fans. We’re really proud of this album and excited to continue putting it out into the world.

This album has been described as different in terms of what you’ve done before, but still distinctively Della Mae. What was your intention when you started to record it?

Going into the studio, we were intent on creating something that felt very much like us. Having spent the 2 years since This World Oft Can Be was released touring and writing, we felt we were on solid ground to accomplish that. Our producer, Jacquire King, equipped us to hone in on our sound and create recordings that truly served the songs.

Give us an insight into what you’re like in the studio. How do you start to put a song together?

We started preparing for this album by collecting songs that we had written or fallen in love with over the past couple years. Lots of iPhone voice memos and Dropbox files! Celia and Courtney do most of the writing for the band and between their songs and a pile of covers we had a lot to choose from. Jacquire has a real ear for knowing what songs will work within the bigger picture of an album. He helped us sift through material and decided what the final songs for the album would be

Tell us how Della Mae came to be and where the band name comes from.

The name Della Mae comes from an Osbourne Brothers Song called “Big Spike Hammer”. Della Mae is a character in the song. Kimber Ludiker (our fiddle player) put the band together about 5 years ago on a whim to start an all female instrumentally strong bluegrass band. Over the years we have evolved into who we are now.

What’s your favourite thing about being in the band?

There are so many joys that come from being in this band, where to start? We love traveling and meeting people from all over the world, trying new food, picking up bits of other languages. It is also so powerful to connect with people through our music, to make them cry, laugh, and dance. Especially the kids – when we have connected with children and maybe inspired them to play music as well, it is an incredibly rewarding feeling.

You are cultural ambassadors for the U.S. State Department’s American Music Abroad program. What does that entail and how did you get involved?

We first found out about the program, American Music Abroad, through a few other American bands. Three to four hundred bands apply for the program every year and the send ten of them to countries around the world, mostly third world countries or places that may have strained relationships with the US. Our job is to share who we are, who Americans are, through our music. It is diplomacy through songs. We would perform public concerts, teach workshops, work at orphanages, collaborate with local musicians. We have seen first hand how this kind of work can mend bridges and open both our eyes and those of the people we meet to understand a little more about each other.

We are looking forward to more summer festivals back home, another tour facilitated by the State Department of the U.S. in the fall, and some touring on the east and west coasts of the US in the late fall and winter. We’re keeping busy!

Advertisement. Scroll to continue reading.
In this article:Della Mae