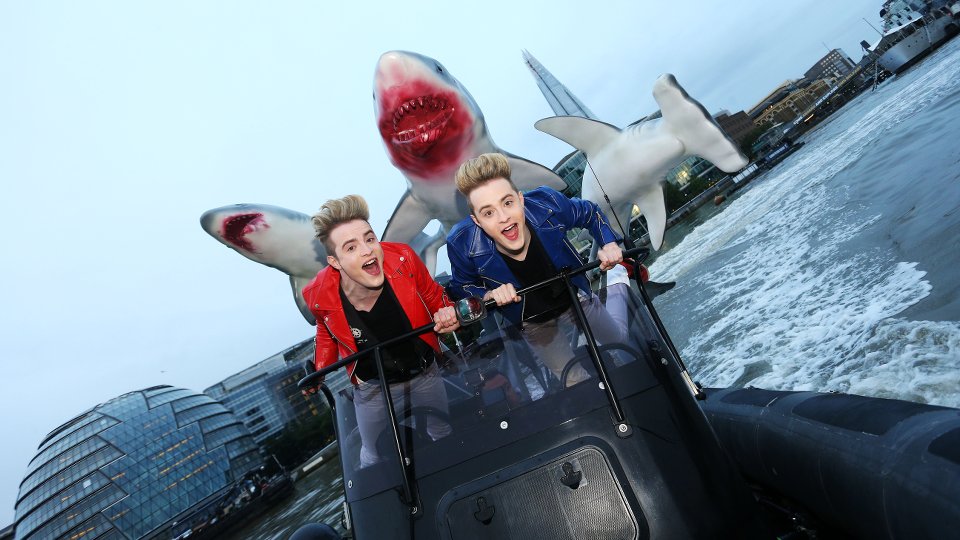 Jedward have been spotted racing up the Thames on a speedboat to promote the much-anticipated third instalment of the popular Sharknado movies.

Being chased by a swarm of sharks, Jedward escaped by the skin of their teeth before they were caught by the Sharknado. The brothers were seen early this morning swooping under Tower Bridge, which was forced to raise its balustrades to allow the savage swarm to pass through.

Taking the helm of a speedboat, John and Edward were seen by commuters as they fled from the vicious gang, which included a Tiger Shark, a Hammerhead and terrifying Great White.

Talking about their experience Jedward said; “We knew something strange was happening when we started to feel a breeze in the air a few days ago. We were lucky to escape thanks to our Jepic speedboat driving skills, making it back to dry land in one piece!”

Jedward appear in Sharknado 3: Oh Hell No! alongside a cast that includes Ian Ziering, Tara Reid, Cassie Scerbo, David Hasselhoff and Bo Derek. The duo have written and recorded the theme song for the film and they make a cameo in the movie.

Sharknado 3: Oh Hell No! premieres in the UK on Thursday 23 July at 10pm on Syfy, just 24 hours after the US. Take a look at some more photos from the stunt with our gallery:

Watch video highlights of the stunt below:

Advertisement. Scroll to continue reading.
In this article:Jedward, Sharknado, Sharknado 3