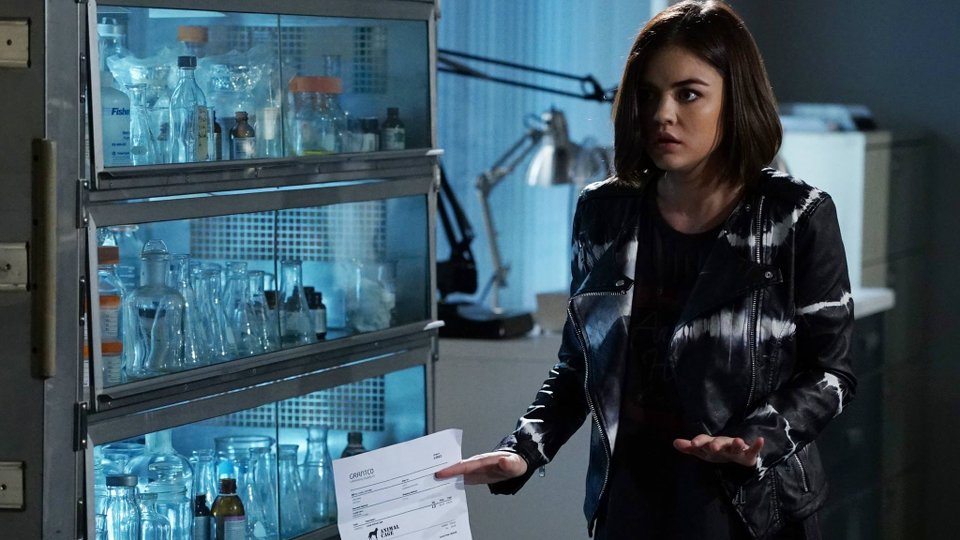 The liars launched an investigation into Lesli Stone (Elizabeth McLaughlin) and found something altogether more surprising.

If you haven’t seen the latest episode of Pretty Little Liars and want to avoid spoilers then we suggest you stop reading now. If you have seen it and you want to relive all of the action then keep reading.

Aria (Lucy Hale), Hanna (Ashley Benson) and Spencer (Troian Bellisario) joined forces this week to try and find out if Lesli really is A. Hanna went to Philly where she staked Lesli out and sweet-talked her way into stealing her car. Spencer was late to meet her, but when they did meet up they found some surprising things in Lesli’s car including animal cages big enough to house people and lots of pairs of glasses with clear glass lenses.

Later on in the episode, the trio went to visit the lab where Lesli works to search for clues. They came into contact with a metal scanner and Spencer was alarmed when she realised that it was going off when it was near the girls’ necks. They realised that A could have chipped them whilst they were in the bunker. Hanna had a flashback to her time in the bunker and she (stupidly) let all the animals in the lab go but soon regretted it when a raccoon turned crazy. Thankfully Mona (Janel Parrish) was on hand as she’s followed the girls. She revealed that Lesli didn’t know Charles and that the night Bethany Young was murdered was the same night she broke out of Radley with Charles. Yes that’s right folks, Charles is alive (we think!). What about those medical records saying he donated his organs? According to Mona they were faked.

Is Aria A’s next target?

Aria returned to the place she’d photographed creepy dolls and caught A on camera. She took Emily (Shay Mitchell) with her and they bumped into Clark (Titus Makin Jr.) who had also returned to the scene to take more photos. Aria made up some lie about having lost her tripod and in a moment of poor body language reading Emily ditched her and left her alone with (creepy?) Clark. Whilst hunting around for the tripod she never lost, Aria found a doll with two heads, one of which was styled like her and had a knife in the eye. Is a sign of things to come?

Aria took the doll home and was weirded out when Clark started asking lots of questions about her personal life. Once home she kept the doll in her bag and was surprised when Ezra (Ian Harding) knocked on the door to give her, her photography competition application form. Turns out she left it at the Brew and Ezra took it upon himself to give her a glowing, if not wholly true, recommendation.

The will they, won’t they tug of war with Emily and Sara (Dre Davis) progressed this week. Emily was pleased when Nicole (Rebecca Breeds), a friend from her humanitarian trip, arrived in Rosewood this week and jumped at the chance to sign herself and Sara up for another trip with her. Unfortunately for Emily, Sara wasn’t quite so enthused and pointed out that she wouldn’t be allowed to leave the country because of her mother. Emily was forced to back out of the trip, which prompted Nicole to ask if Emily’s feelings for Sara are likely to be reciprocated. Emily was taken aback and denied she felt anything for Sara, but later in the episode as she checked for a chip in the back of Sara’s neck, Emily was greeted with Sara’s lips and the two made out.

Caleb (Tyler Blackburn) found that the path to true love never runs smoothly as he and Hanna struggled to deal with their relationship following Hanna’s PTSD after leaving Charles’ bunker. After getting the brush off from Hanna when trying to give her a lift, Caleb bumped into Ashley in the Brew and was told that she may never tell them what happened to her but that treating her like normal is the best way to get through to her. Caleb promptly when to see Hanna and assertively made out with out, which ended with the two getting rather intimate.

Dean (Nathaniel Buzolic) was hanging around again this week and he took Spencer a care package containing plenty of (non-pot) brownies. She confided that Melissa (Torrey DeVitto) and her mother (Lesley Fera) were trying to convince her to do a Valedictorian speech and Dean told her to do what felt right to her. They arranged to meet up later that day but when Spencer was late, Dean flew off the handle and told her that he worries when people are late, especially when said people are addicts and could be lying dead in a gutter. Spencer apologised but Dean told her he could no longer see her before confessing he had feelings for her.

Kenneth DiLaurentis (Jim Abele) got one hell of a surprise this week when he found a birthday card under his windscreen wiper. After reading the inside of the card, Kenneth reacted angrily and interrogated Emily who was passing by on her bike. At the end of the episode we saw Kenneth calling a list of doctors before visiting Aunt Carol’s house and digging up Charles’ grave. At that point we saw the inside of the card, which was a death threat from Charles and someone (presumably Charles) was watching in the bushes.

Pretty Little Liars continues Tuesday at 8/7c on ABC Family in the US and Wednesday on Netflix in the UK. Watch the promo for next episode O Brother, Where Art Thou below: