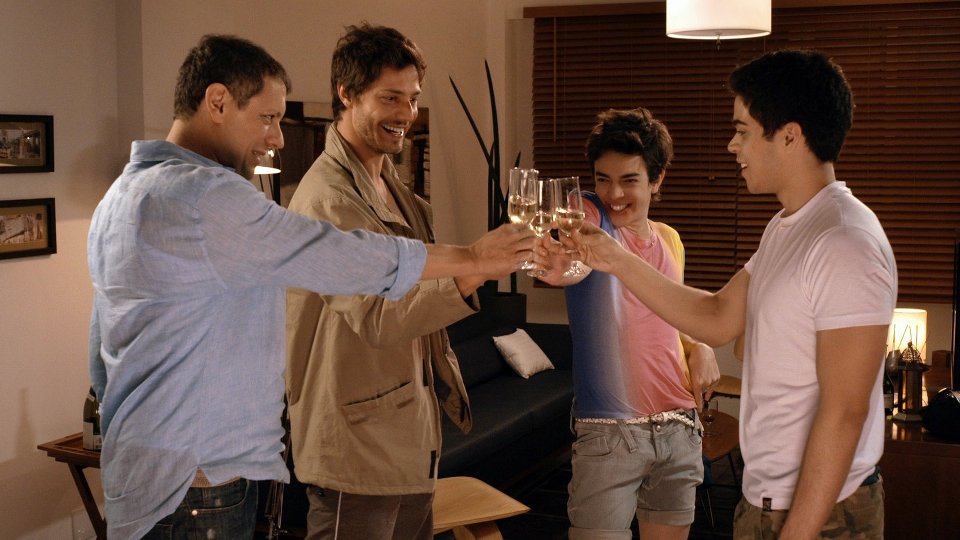 Mauro (Luis Vaz) takes his friend Rodrigo (Mauricio Evanns) to the Sao Paulo Gay Pride Parade chaperoned by his uncle Vicente (Marcello Airoldi). On the way home they rescue Roger (Andre Bankoff) who is in the midst of being assaulted by homophobes and take him back to Vicente’s flat. As he recovers from his attack, Roger is welcomed into the group who he learns are all still in the closet, like him. Mauro proposes that the four men make a pact to come out of the closet before the next Pride Parade, which they all agree to but find harder than they realised.

Boys in Brazil tells the story of four very different men who are keeping their sexuality secret for various reasons. Mauro has strict religious parents who believe that homosexuality is a disease whilst his uncle Vicente is worried that it will hamper his career opportunities at work. Rodrigo is desperate to lose his virginity for the first time but is adamant it must be with the right person, and doesn’t want anyone to know he’s gay. Roger is perhaps the most complicated of the bunch as he’s married to a woman and has a child with another one on the way.

The standout performance in the movie is Andre Bankoff. His talent matches his incredible good looks and you feel for his character Roger. His life has fallen into what is expected for a straight man and he feels trapped with no way out. After meeting Vicente his life is changed and he carries on an affair, as his wife is pregnant with their second child. Roger is a complex character and Bankoff does a fantastic job of bringing the character to life and showing his struggle. Luis Vaz is also worthy of a mention as extrovert Mauro. He gives a forceful performance truly grabbing Mauro’s over-the-top nature and running with it.

Alexandre Carvalho does a wonderful job directing the movie from Andre Collazi’s screenplay. He creates a nice contrast between the celebratory and liberating feel of Pride and the reality that these four men live in. He gets great performances from his main actors and keeps the movie ticking along at a nice pace so it never sags.

Boys in Brazil is an enjoyable watch with solid performances and a few nice twists along the way. For the most part the movie is a build up to the four men coming out but whether they all do or not we couldn’t possibly say. It’s a reminder that whilst we’re fortunate to live in a country where sexuality is becoming less and less of an issue, it’s still far from the same in other parts of the world. Everyone has their own coming out story and we all had a battle of sorts to get the confidence to do it. Boys in Brazil will take you back to when you came out and you’ll undoubtedly find one of the four characters to identify with.

Watch the trailer for Boys in Brazil below: