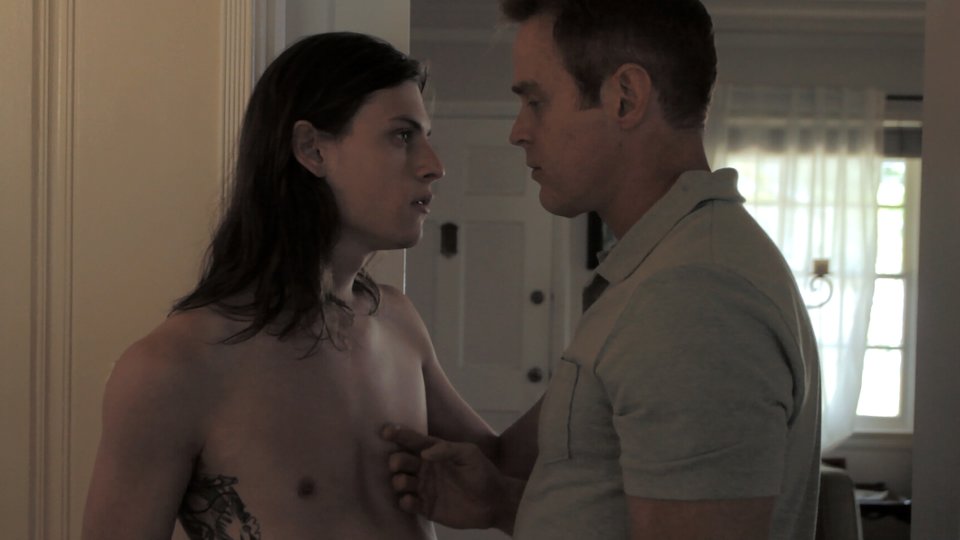 Evan (Harry Hains) suffers from a lack of identity and understanding of family after growing up through the foster system. Living with his controlling boyfriend Chris (Nicholas McDonald), Evan tries to find his place in the world as his relationship starts to fall apart. After meeting an old man a yard sale, Evan buys an 8mm movie camera and is told if he comes back the next week the old man will teach him how to use it. When Evan takes the old man up on his promise, he instead meets the man’s adult son Peter (Michael Redford) and the two quickly form a close relationship.

The Surface is the latest film from writer/director Michael J. Saul and it’s an exploration of family and what it means. The film centres of Evan as he stumbles from one thing to the next in search of something meaningful. His relationship is all wrong, he lacks direction in life and he longs to understand what family means. He isn’t surrounded by the right kind of people to help him deal with his issues so his chance meeting with Peter is somewhat of a turning point for him. As the two characters grow closer, Evan doesn’t really connect with Peter (who is considerably older) in a mature way and doesn’t seem to realise Peter has his own issues with his past.

Model Harry Hains makes his feature film acting debut here and his performance is one of the disappointing things about The Surface. Evan is such a complex character with lots of layers but Hains sadly isn’t equipped to able to showcase those with his acting skills. Instead his performance comes off a little cold and he doesn’t really ever dig into the emotion and conflict burning inside Evan.

Much better is Michael Redford as Peter, who becomes both a father figure and a lover for Evan. Redford establishes Peter as a strong figure who has life experience under his belt, something that Evan longs to have.

The Surface is a decent enough movie and we admire Saul for creating a story that features gay characters without their sexuality being the main focal point. With a stronger actor in the lead, The Surface could have been elevated and it’s a shame. Hains has potential but it’s too early in his acting career to be able to pull off a role like this with the gravitas necessary. The Surface is enjoyable but it’s not quite as profound or remarkable as it thinks it is.

The Surface, makes its world premiere on 27th June 2015 at the iconic Castro Theatre, San Francisco as part of Frameline 39.

“The Surface” Official Trailer from michael saul on Vimeo.