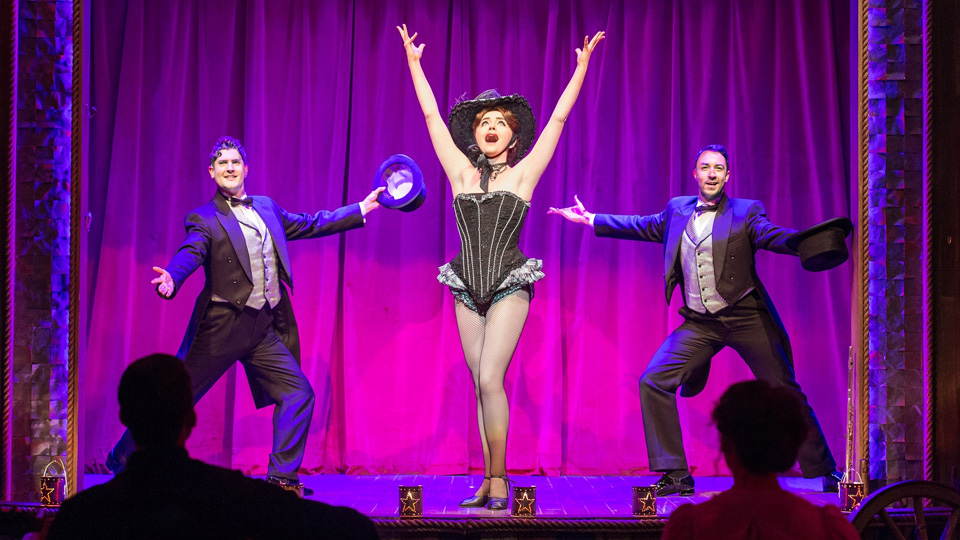 It’s the Summer of 1876 in Deadwood City, Dakota. When Calamity Jane, a tomboyish cowgirl, brags that she can deliver hot Chicagoan performer Adelaid Adams to the local stage of Deadwood, she sets out to the big Windy City to persuade the sultry starlet, only to pick up her maid for a live performance which will shake up the local community and create a love triangle of gunslinging proportions.

The show finds its heritage in the real life historical characters of Calamity Jane and Wild Bill Hickok, who enjoyed a notoriously hellraising marriage in the Dakota Territory. Laterally developed into a highly successful 1953 Hollywood musical featuring Doris Day, the movie featured numbers such as The Deadwood Stage, The Windy City and The Black Hills of Dakota, which have firmly became locked in the public consciousness. Today the musical has been further expanded for stage, featuring no less than twenty evocative numbers performed using traditional instruments by performers on set. There is a genuine rustic feeling to the music, accompanied by energetic dance routines which extend the impression of a leg-kicking Western jig throughout.

Jodie Prenger stars as Calamity Jane in an effervescent performance which is both touching and explosively funny. Prenger’s vocal strength is well exercised in the musical numbers, particularly during a toe-tappingly catchy version of The Windy City. A bubbling mixture of Dolly Parton and Liza Minelli – seriously – Prenger’s Calamity is all her own creation with a distinct skill in quirky comedy which dominates the stage. Of particular note is how Calamity remains lovable whilst totally antagonistic; a beautifully subtle element which Prenger has honed perfectly through movement and eccentricity. Tom Lister costars as Wild Bill Hickock in a stately performance which allows the well-known Emmerdale star to showcase his musical skills; from vocal solos to percussive drums, Lister is constantly engaged in stage business and is an active attraction. Lister’s performance is evocative of the Hollywood era from which the play borrows much of its tone, with a 1950s leading man elegance which is both engaging and suitably light of touch.

In addition there are excellent performances from Sophia Ragavelas as Katie Brown, showcasing a study in cute awkwardness and Bobby Delaney as a wonderfully camp Francis Fryer. Two characters who visibly evolve on stage into stronger beings by show’s conclusion, they are part of a larger ensemble which is wholly faultless.

Nikolai Foster’s direction is inspiring and unassuming, honing traditional theatrical techniques to evoke movement and a sense of place without unnecessary scenic changes. There is an homespun texture to the design of the show, deeply routed in the 19th Century West; drapes are dusty and earthy colours abound, whilst haze continually hangs above the stage like pipe smoke, gently lit with a candle-like glow . A show which embraces classic formulas, Calamity Jane feels like a jump back in history in terms of story, yet also a welcome hop back in time in terms of theatrical ingenuity.

A warm and nostalic ride from yesteryear, Calamity Jane captivates with an earthy charm and a broad appeal. An upbeat adventure which evokes the gusto of the finest Western adventures, it is a sympathetic take on the golden era of the Hollywood musical. A whip-cracking adventure with wise-cracking comedy and wildly driven music, there’s no reason not to saddle up and join in on the wild Western fun.