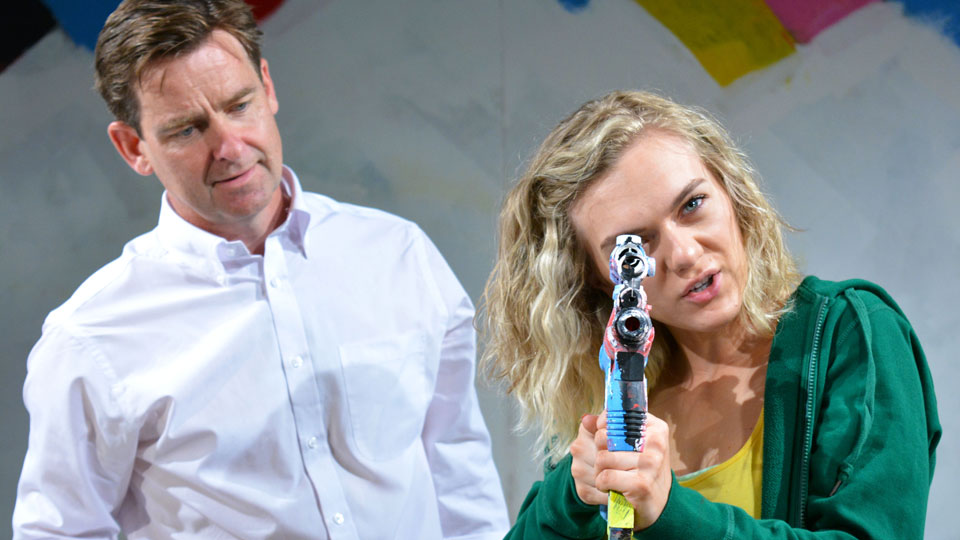 I and the Village examines the aftermath of a shooting in a church when teenager Aimee interrupts a service with a gun. It uses clever misdirection to keep the audience uncertain as to who is in the right and who is in the wrong – if anyone – and captures something of the hypocrisy inherent in the parochial views of small town inhabitants.

The problem is that the audience is bludgeoned over the head with the metaphors – Aimee is the only character who dresses with any colour. Everyone else in in white. She asserts her autonomy by spray-painting white walls with colour, only for her efforts to be later white-washed away.

The dialogue similarly lacks nuance. Six actors have their work cut out playing disparate members of the same community, with only Chloe Harris remaining constant as Aimee. Doubling up of parts isn’t inherently problematic, but when there’s a constant barrage of short scenes introducing new characters the end result is confusing and alienating. The moments that achieve the most compelling drama are those that take part between two characters, especially Chloe Harris’ scenes with David Michaels as her older lover.

It has to be said that Chloe Harris is excellent as Aimee, conveying an unhappy teenager without resorting to cliche. She comes closest to creating an intriguing character. Many of the other actors, notably Stephanie Schonfield who most often portrays Aimee’s mother, convey surface emotions as they flit from character to character. The lack of emotional content of the drama leaves the climax in the church less than convincing, although a well thought-out reversal offers some consolation.

Overall, there is a good story within I and the Village, though it is buried by the style and presentation. Intrusive and near-constant sound and music (Harry Barker) is used as a shorthand way of establishing mood and atmosphere, and telling the audience how they should feel. This ought to come out of the drama, but too often it doesn’t.