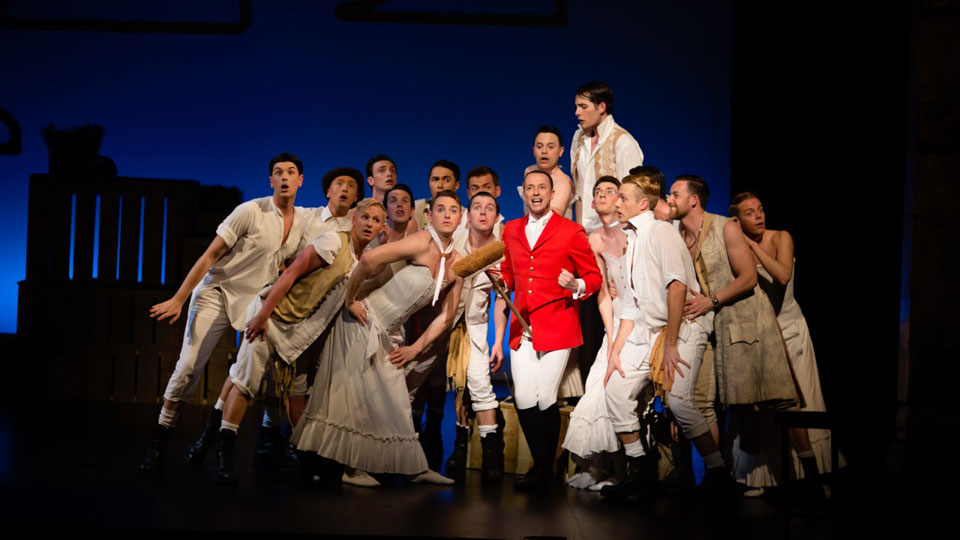 Sasha Regan is the Artistic Director of the Union Theatre, which she founded in 1998.

Her all-male production of Gilbert and Sullivan’s The Pirates of Penzance is about to be revived, and will play at the Hackney Empire from 24th June.

We caught up with Sasha to find out a bit more about what audiences can expect from her production, and where her love of theatre came from in the first place.

What’s the artistic vision of the Union Theatre?

At the moment we have been programming British Work, so for all of 2015 our audiences have been enjoying the Best of British; Musicals, plays and cabarets. I’m not sure that my audiences are even aware of it but they keep coming back and the feedback has been really positive. I programme for the Union regulars, I believe that they trust me now, so if there is an interesting piece that they will appreciate then that production gets a slot. We do produce 70% of all the work so it’s a busy place to work.

What have been the highlights for you since setting it up?

When I thought that the Union was going to be closed (I was served my notice last year but have managed to convince Network Rail to allow us to stay) I cried. For 18 years, the Union has essentially been my second home. The memories and friendships from that dusty old theatre will stay with me for life; Late nights, early mornings, quarrels, laughter, hits and misses. It’s been great.

How did your love of musical theatre come about?

My parents. I was a really fortunate child, as my parents believed that life is made up from experiences. So I had a very rich childhood made up of country walks, gallery visits, museums, markets, restaurants and theatre trips. I have a love of all theatre – it just so happens that my course has become a musical one.

We hear the theatre is moving to a new premises next year. What can you tell us about that?

Rather than eviction Network Rail are going to help relocate the Union. I didn’t think that I would be starting all over again after 18 years but I don’t have another option. Move or move out. It will be very close by – so hopefully all my regulars will still come and visit.

You’re directing The Pirates of Penzance for a UK tour. Will the production differ from the award-winning one of 2009/10?

The production is essentially the same but there are lots of beautiful little changes that have come from the new cast. Each company that has worked on Pirates, this is the 5th cast, find new moments that then become permanent, so gradually over time it becomes richer and richer.

What made you decide on an all-male cast?

I love the innocence of the all-male casts. Like a bunch of fresh-faced schoolboys they have an energy that is infectious. It eradicates the need to overplay the gags and makes the entire story more truthful. If that is even possible in the topsy-turvy world of Gilbert and Sullivan.

What are your plans for the future of the Union Theatre?

I want to carry on creating work that excites and provokes reaction form my audiences. If the work can then be seen by a wider audience I will be a very happy woman. Onwards and upwards!

The Pirates of Penzance is at Hackney Empire from Wednesday 24th – Sunday 29th June 2015. For more information and tickets visit www.hackneyempire.co.uk or call 020 8985 2424.

Advertisement. Scroll to continue reading.
In this article:Hackney Empire, Sasha Regan, The Pirates of Penzance