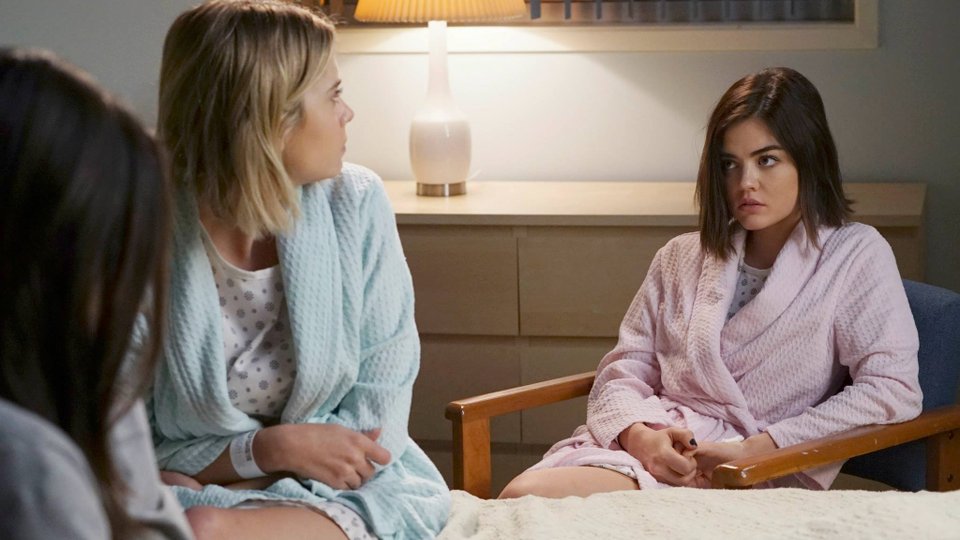 The liars struggled to adjust to normal life after escaping Charles’ bunker in the latest episode of Pretty Little Liars.

If you haven’t seen the episode and don’t want any spoilers then we suggest you stop reading now. If you have seen it and want to relive all of the action then keep reading.

Aria (Lucy Hale), Spencer (Troian Bellisario), Hanna (Ashley Benson) and Emily (Shay Mitchell) recovered in hospital and agreed not to tell the police about Charles. With the news having reached them that Andrew (Brandon W. Jones) was in police custody, the girls agreed to let the police do their jobs.

Emily paid a visit to Sara (Dre Davis) and probed her for information about her time in the bunker. She learned that Sara ran away from home and was hit on the head in Rosewood parking lot before she was imprisoned for two years. As Emily pushed, Sara refused to give her any more information.

The girls were discharged from hospital and they found out that Sara had already left with her mother. Mona (Janel Parrish), was presumably also discharged, although she was absent from the entire episode.

Look back in anger

Aria dealt with life after the bunker by getting angry. Ezra (Ian Harding) tried to extend his support and suggested that Aria write down her experiences as a way of dealing with them. She reacted angrily and insisted she didn’t want any record of what had happened to her. Instead she threw herself into photography and was keen to tell the police that it was Andrew who kidnapped her and her friends, despite having no actual evidence that was the case. Ella (Holly Marie Combs) accompanied Aria to the police station and was alarmed when her daughter flat out lied about having seen Andrew in the bunker. Realising her mistake, Aria had a heart-to-heart with Ella once they were home but she was desperate to believe that it was Andrew who was behind the whole ordeal.

Hanna, like Aria, had a lot of anger but what troubled her most was having to be in her bedroom after being held captive in a replica of it in the bunker. She decided the only way to move forward was to clear out her room and redecorate. Caleb (Tyler Blackburn) and Ashley (Laura Leighton) tried to get her to talk about what had happened to her but she refused. Caleb realised he was getting nowhere with Hanna so he agreed to help her clear out the room and replaced her bed temporarily with a blow up mattress. Out of all the girls, Hanna was the one least enthused to see her friends following their ordeal.

Once an addict, always an addict

Spencer returned home with a truck-load of pills but was angry to discover that she hadn’t been given anti-anxiety pills like the rest of the girls. Veronica (Lesley Fera) explained that she couldn’t risk Spencer having a relapse despite her daughter’s protestations. Spencer saw Alison (Sasha Pieterse) who informed her that her father said that no person called Charles existed in their family causing Spencer to accuse Ali’s dad of lying to her.

Spencer became agitated when Toby (Keegan Allen) admitted the case against Andrew wasn’t concrete, worried that their suspected tormentor may soon be roaming the streets of Rosewood again. During a visit to Aria, Spencer helped herself to some of her friends’ drugs and returned home where she contemplated taking them. She was interrupted by Veronica,who told her they would sit up together and watch a movie until they fell asleep.

Perhaps the angriest of all the liars this week was Emily. Despite at first appearing to be the most together of the girls, Emily guessed the combination to her dad’s gun cabinet and hit the gun range. Her mother was shocked when she received a call saying Emily had been there and forbid her from using her father’s guns, or going to the gun range, again. Pam (Nia Peeples) encouraged Emily to reach out to Paige (Lindsey Shaw) but she was having none of it. Instead Emily went back to the gun range with a hired gun where her mother caught her.

Back at home Emily received another scolding from Pam and later that night she took a wander outside the front of the house where she saw Sara lurking across the street. She alerted Pam and the two allowed Sara to stay over night with them. They listened to her as she told them her mother wasn’t pleased to see her and that she could never please her.

Love in a hopeless place

If anyone can find a love connection in the midst of a bleak aftermath, it was always going to be Alison wasn’t it? The troublesome youth had an awkward exchange with Toby and met his new partner Lorenzo (Travis Winfrey). After a bit of not too subtle flirting, the two saw each other again at church but Ali was pretty rude to him when he approached her after the service. Later Ali saw Lorenzo at the Brew and apologised for her behaviour. He offered her a mini hamburger and it looks like love may be in the air.

What really happened in the bunker?

We got a little look at what happened to the girls during their time in Charles’ bunker. It seems that he forced them to play evil games where they tortured one another. Through flashbacks we saw the girls saw in front of a series of buttons, each one with a picture of one of the liars. They had to choose one button to push otherwise they all would be punished. Hanna is the only one of the girls who spoke about Charles’ games but she kept the details vague. Aria apologised to Spencer but didn’t elaborate on what she was apologising for.

Who is Charles DiLaurentis?

Suspicious about her father’s evasive answers, Alison looked to the family photo album to find out who Charles was. All she found was a few blank spaces where photos should be so it seems that Spencer was right to believe Ali’s dad was lying to her.

Pretty Little Liars continues at 8/7c Tuesdays on ABC Family in the US and on Wednesdays on Netflix in the UK. Watch the promo for the next episode Songs of Experience below: