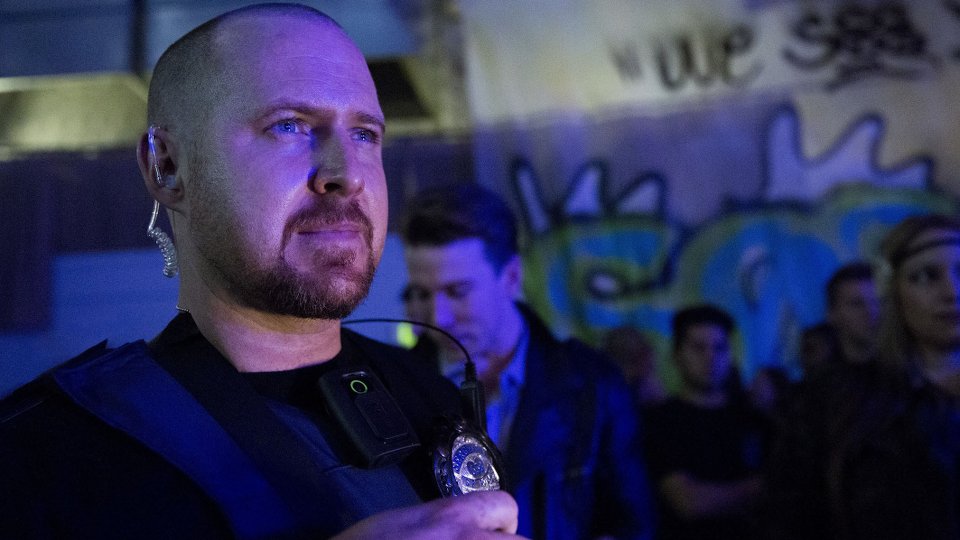 Irish-born, Canadian actor A.J. Buckley is set to make waves when he joins crime drama Murder in the First for its second season.

Kicking off this week on FOX in the UK, the hit crime drama sees the return of Taye Diggs and Kathleen Robertson as detectives Terry English and Hildy Mulligan. Buckley has joined the cast as a regular for the new season playing the role of Hildy’s younger brother Junior.

How are you doing today?

Not bad. I’m just on set right now. It’s my last day (on Murder in the First) today believe it or not.

Are you feeling sad about that?

Yeah, you always get sad at the end. It’s like anything where you’re in your routine and you’ve been around these people for six months, and you’re doing really great work with everybody you become really close, really quickly. It’s like a circus; you do the show then people go off in different directions and you meet a new circus and become a part of that family (laughs) It’s an ever-changing family but it’s a really solid, really talented group of people on this show.

The second season of Murder in the First starts this week in the UK. The plot details are being kept tightly under wraps ahead of the season premiere. What can you tell us about the new season?

It’s really tightly guarded. I’ll give you the broad strokes of what I know I can get into. Last season was kind of a slow burn. This comes out of the gates like a canon. You’re into the season the second the show starts. There’s a school shooting and all units within the San Francisco area are called to the incident. This is how all of the new characters get introduced. During the course of the shooting, all of these other things unravel around what happened that day.

It sort of opens up Pandora’s Box into the world of the departments, people’s personal lives, how this tragedy affects everybody and what people do. There’s an A & B storyline of who killed whom and it’s a real game of clue on this one. We had no fucking clue because they don’t tell us anything, which is quite frustrating (laughs), on who is the person who’s done it and what your arc is on the season. You’re just given the background of your character and that’s it.

It’s very much like playing the game Clue while you’re reading the script. Each table read you’re like ‘who the fuck is it? Who is it?’ (laughs) and the writers would just laugh. So many times we want back and forth but it’s a real fun ride for sure. It’ll keep you guessing the entire time and there’s multiple plot twists. There were a few last season but this one keeps turning it on its head. You think you’re going in the right direction then they flip it on you, and flip it and flip it and flip it. I’m excited man!

Let’s talk about the character you play, Marty aka Junior who is the brother of Hildy Mulligan. How does he play into this season?

Junior is the Head of the Vice Department at the San Francisco PD. He basically comes from a world of narcotics and prostitution, a world that is unpoliceable. He comes with a lot of baggage. He’s a good cop and he’s fearless but he’s got a drinking problem and he’s racist. He sort of has his own law on how he gets answers and he’s real aggressive testosterone filled guy that’s got a lot anger and has a real issue with his sister in authority. In the beginning of the season he gets brought from Vice, because they’re short on men in this crisis, to Homicide working side-by-side with his sister. Having his sister as his superior just causes an awesome brotherly/sister dynamic. His belief is that women should never be cops, let alone his sister who is an amazing cop, and he’s just the younger fuck up brother. He comes on the show like a bat out of hell and he’s got a lot of problems (laughs) and an attitude.

It sounds like there’s going to be sparks with Hildy then as she’s pretty feisty and independent isn’t she?

Oh yeah! We go at right out of the gate. There’s no love lost at all. We’re at each other’s throats from the get go. I have a huge family and the way they wrote the brother/sister dynamic was really truthful dialogue. We’re trying to maintain this professionalism on the job but your natural instinct is just to go back to the brotherly/sisterly way you act with each other. Kathleen is such a talented actress. I was a big fan of hers from Boss but she’s legit, she’s the real deal so to get in the ring with her and go back and forth acting wise was such a pleasure. She’s such a sweetheart. We both got into and were so excited about the dynamic between the brother and sister. She got to really go more into her (character’s) past and who her character was.

You mentioned that your character is racist. Is it safe then to assume that Junior is going to have an issue with the fact that his sister has a black partner?

Yeah! There’s some big stuff there. He’s angry at everybody and there’s no rhyme or reason as his reasons don’t make much sense. He’s just an angry guy who has problems with authority and likes to use his badge to abuse his power.

For the role you had to transform yourself. Tell us about that…

For me, with my journey in television over my career I was on CSI for 9 years playing a dorky lab guy then Supernatural being this dork and then going into Justified and getting to play this menacing character. With (Murder in the First) I was told I had the part but I needed to physically get in the best shape of my life. Junior had to be this physically imposing guy. I had my kid and got a little bit fappy – fat and happy I call it (laughs) – so I went and auditioned for it. They told me I had 3 months to get in shape or I could have potentially lost the job if I turned up out of shape. I’ve never trained so hard. I’ve never had a six pack before so my fiancée was pretty excited about that (laughs).

How did you get involved with Murder in the First? Were you a fan of the first season?

I think it was the role. I’m such a big fan of Steven Bochco, he’s such a legendary producer, and there was this other producer on board Robert Munich who has been a big huge mentor in my career. He mentioned that this role was coming up and asked me to come in for it. Then I went and watched the season and I thought it was brilliant. When they explained whom my character was going to be I wanted it really bad and I went in and fought for it. The writing across the board and the people involved made it such a great experience.

In your career to date you’ve appeared on a lot of big TV shows. What would you say has been your favourite so far?

Each one has their own thing. I’ve been really fortunate in my career so far because I haven’t played the same role twice. I think a lot of people find that they are placed as ‘that guy from Entourage’ or ‘that guy from Supernatural’ but I always try to transform myself so people don’t know it’s me or do something physically so that it’s different. For each one of those journeys I go on that transformation, I find that’s its own experience. CSI was such a learning experience. I spent 8 years on that show and I was a kid when I got that role. I kind of felt like I’d gone to school and I learned a lot technically about how a show is done. CSI never really pushed me emotionally, except for a couple of episodes, but it was a procedural drama. You would show up on a certain page and be out on a certain page. It was perfect at that time.

With Supernatural getting to write and direct the web series and the spin-off was an amazing experience from Warner Bros. It was such an honour to get to do that an dbe part of that Supernatural family.

Justified is such a dialogue driven show and the actors are so top notch. To get to show up and be a character that was a pivotal character in the season. I feel for the first time I saw where I wanted my career to go, what cable shows I wanted to do and that sort of dialogue/character driven stuff.

(Murder in the First) is its own experience of being pushed and changing myself. Now I’ve gotten into shape and bulked up, which is something I’ve never done in my career before, all of these roles and opportunities are presenting themselves for these types of characters. I think overall not having had to play the same role twice is my favourite thing. I love each character and redefining myself within a character.

Are there any shows you love that you would like to be a part of in the future?

I fucking love Homeland! There’s another great show on Netflix called Bloodline. Of course you’ve got Game of Thrones – being Irish I would love to do that! Peaky Blinders – that is fucking amazing! Are you kidding me? That’s one of the best shows on TV. I would wet myself if I got to do that show. That show is top notch! It’s awesome! The material is so great right now for actors!

Murder in the First returns to FOX HD at 10pm on Friday for its second season.