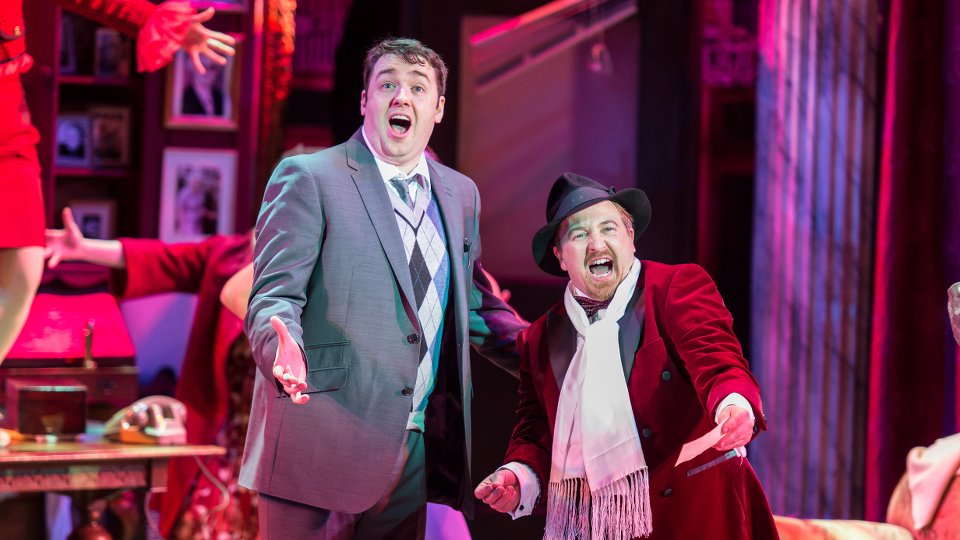 In 2001 Mel Brooks adapted his hit comedy film The Producers into a hit Broadway musical. This week the Tony award-winning show arrives at Leeds Grand Theatre.

The Producers is the story of Max Bialystock (Cory English), a theatre producer with a string of Broadway stinkers to his name. When accountant Leo Bloom (Jason Manford) reveals that more money can be made from a failure than a success, Bialystock sources a hideous script to be realised by an incapable director, in the hope of creating a guaranteed flop. With plans to escape with the show’s investments to Brazil, the duo’s hopes are dashed when Springtime For Hitler becomes an unexpected hit.

Brooks’ original 1968 film caused a storm of controversy at the time of its release, due in part to its broad ethnic humour and sexualised gags. Intentionally offensive, The Producers aimed to poke fun at perceived stereotypes whilst demystifying the pompous backstage affairs of Broadway. In this new musical adaptation, Brooks and Thomas Meehan have created a version for stage which captures the ethos and sexual liberation of the Sixties movie, whilst relocating the show somewhere in the Fifties, on the cusp of a permissive society.

The thrust of The Producers still shocks with its gross-out vulgarity and anti-political gags. From old biddies on heat to prancing Nazis in glitter, or screaming homosexuals in ball gowns, the show is the ultimate presentation of gorgeous bad taste. Brooks’ comedy arsenal ranges from slapstick to dry satire, using every and any means as a vehicle for a humorous payoff. Setting out to rattle cages with its brashness, The Producers wins over its audience with is outright absurdity. It may be a satire on the self-importance of theatre, but at its heart the show is a knockabout joyride which assaults everybody with equal contempt.

Television comedian Jason Manford unenviably follows Gene Wilder in the part of Leo Bloom, the character which launched the latter’s Hollywood career. Manford channels much of Wilder’s filmic performance; a gibbering, wet-eyed sissy with a desperate reliance on his blanket comforter whilst wrestling with repressed sexual urges. In a performance which may surprise many, Manford projects a fine vocal range with a rich, sustained clarity. Cory English is particularly outstanding as Max Bialystock, flaunting a hefty ego with unobtainable ambitions. There is a genuine texture of Mel Brooks in his performance with flashes of cartoon-like posturing. A casting choice which comes left of field is comedian Ross Noble as crazed Nazi Franz Leibkind, a nostril-flaring psychopath turned Broadway script writer. Noble has the ability to make pure silence intolerably funny and his imposingly violent realisation of Franz is one of the most memorable performances in the show. David Bedella scores highly in an exceptionally camp extravaganza as Roger De Bris, the ostentatious director who assumes the role of a mincing Adolf Hitler in a scene which is relentlessly flash and adorably trash.

Matthew White’s direction is energetic, presenting an endlessly frantic stage. Scenic changes are innovative, showcasing sets which are charmingly decorated in mid-century artifacts. The central setpiece in Springtime For Hitler is masterfully realized with over a dozen line dancing Nazis surrounding a sequined Hitler; it is a scene which makes Liberace appear like a man of taste and restraint. An assault of shimmering campery, the sequence is mid-budget musical with low-brow taste. There are few words which can describe the uneasy reveal of a swastika emblazoned in glitter. Subversive genius, perhaps?

The Producers is a tough show to define as there’s little else quite like it. Pure silliness and escapist entertainment with a backbone of satire, it is brave and brash; a double-barreled assault which strikes right between the eyes. Hilariously unsettling and brazenly on the nose, The Producers is a motherload of poor taste which wins out through a charm offensive of being offensively charming throughout.