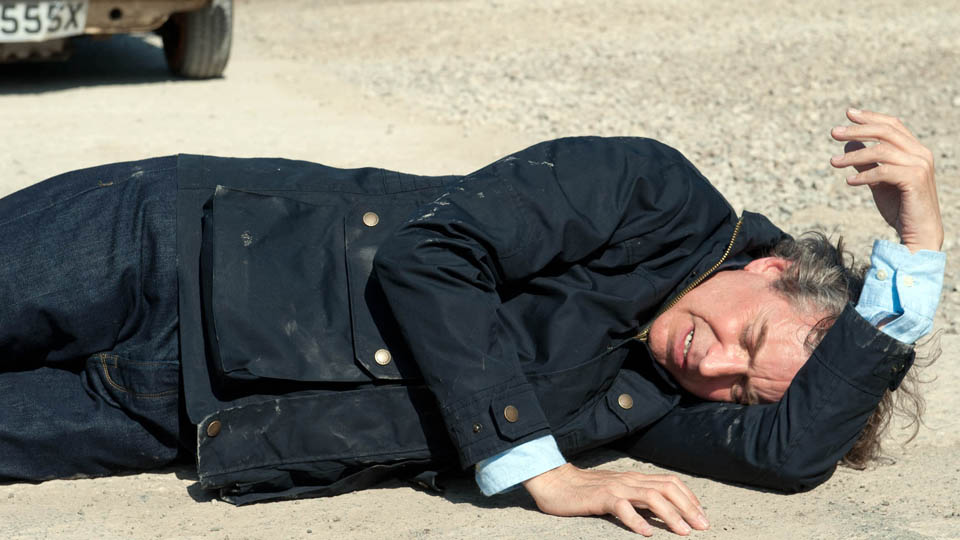 What a drama packed Friday it was in Emmerdale.  This week we see the fall out from the revelation that Vanessa slept with Adam and doesn’t know who her baby daddy is and an innocent by-stander gets hurt in the process.  Read on for more on this week’s Emmerdale.

Adam’s relationship with Victoria is in ruins as she throws him and his belongings out of her house.  Protective big brother Robert, suggests to Victoria that she get revenge on Adam and sets him up with stolen goods, much to her alarm.

Adam is determined to put things right with Victoria, but matters get worse when he is told that Vanessa’s unborn child is his after all.  Victoria learns this from Kirin and furious she heads out to her car and leaves an angry voicemail for Adam.  As she speeds off she almost knocks Adam down and after arguing with him she speeds off again only to run over Ashley.

He picks himself up and assures the couple that he’s fine and off he goes to find Laurel.  However, he soon realises his head is bleeding.  When he finds Laurel she’s clearly tempted to have some of Sandy’s booze and he confronts her, reminding her how well she’s doing.  Suddenly, on leaving the pub he collapses and is rushed off by paramedics to the hospital with no one knowing what’s wrong with him.

At the hospital Harriet and Sandy are told that he’s had a severe head trauma and they have put him in to a medically induced coma.  Meanwhile, upon hearing the news, Adam rushes to warn Victoria that Ashley is in hospital.  Panicked and guilt ridden, Victoria accompanies Diane to the hospital and feels even worse when Harriet suggests it was Laurel that injured Ashley.

Adam scraps Victoria’s car and even offers to take the blame for her, still trying to prove how much he loves her and he thinks that he’s gotten through to her, until he comes downstairs and she’s nowhere to be seen.

Whilst Victoria wrestles with her guilt, Laurel is pushed towards the drink when the accusations land at her door.  At the hospital she manages to sneakily down some vodka in the toilets.  When she returns to the ward she finds Victoria confessing to Harriet and reacts badly.  Harriet isn’t happy either, but when she realises Laurel is drunk the pair argue ending with a slap in the face for Laurel.  Right at that moment Ashley takes a turn for the worse and starts convulsing in his bed.  Harriet, Sandy and Laurel watch on as the doctors and nurses get to work on stabilising him with all worried he might not make it.  Laurel gets in the way and is sent packing by Harriet.

Back in the village, a drunken Laurel sees Sandy sobbing in Edna’s arms and assumes the worst with disastrous consequences as she tells everyone Ashley’s dead.  Later, at the hospital when she realises he’s not dead, Laurel makes a vow never to drink again leaving Harriet worried about what she overhears.

When James announces that he plans to leave the village, Emma intervenes to jeopardise his move and it looks like she’s implicated Chas in doing so.  James is less than pleased to think that Chas has lost him the flat, but Emma suggests he can stay on their sofa which arouses Finn’s suspicions.

Finn confronts his mum and finally,  Emma comes clean that she’s still in love with James and thinks that he could love her too if given the chance.  Finn is left concerned with how deep her feelings run for James and doesn’t know how to react when she asks him to help prove her case to James.

Val masquerades as Brenda to defraud the bank with Bob, in order to get a loan for Carly to buy the shop.

Leyla and Jai start up their affair once more.

David and Alicia get ready to say their goodbyes and head off into the Portuguese sunset.