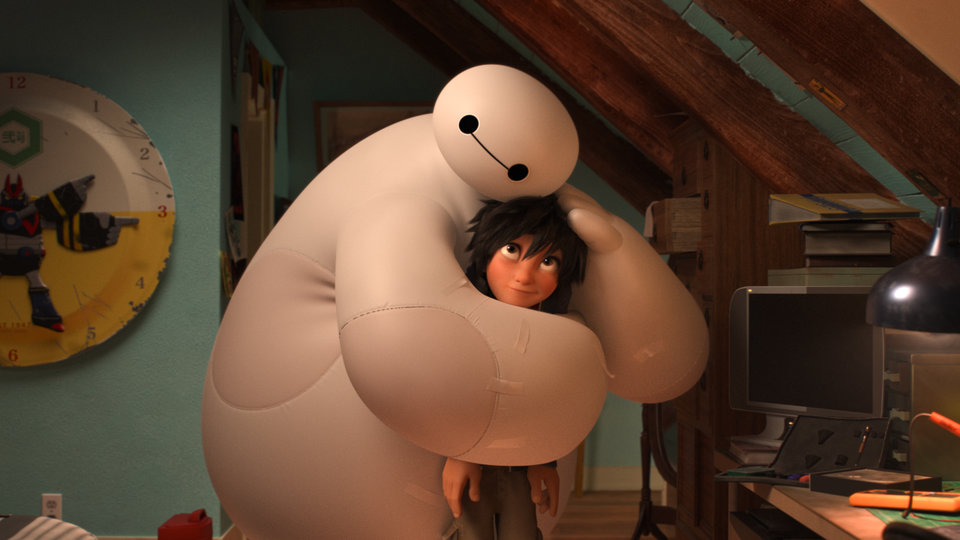 Hiro (the voice of Ryan Potter) is a clever teenager living in the futuristic city of San Fransokyo who doesn’t apply himself, spending his time taking part in illegal robot street-battles instead. His brother Tadashi (Daniel Henney) convinces him to enrol in his tech college where he is working on a new medical project – an inflatable healthcare assistant named Baymax (Scott Adsit). Soon Baymax and Hiro team up to uncover the truth behind a conspiracy involving a mysterious criminal in a Kabuki mask.

Disney have done it yet again with a sensational action-adventure that makes you laugh and cry. The setting of San Fransokyo (an inventive, heady mix of San Francisco and Tokyo) is stunning to behold and provides the perfect backdrop for this enthralling story to be told. The attention to detail here is staggering, with animation of the highest order that positively pops onscreen. But this isn’t just a pretty looking film. The story is compelling and the characters are real and engaging, giving Big Hero 6 a plot that will perfectly appeal to every age-group and demographic.

The vocal cast are all brilliant with Ryan Potter and Daniel Henney convincingly portraying the brothers at the centre of the story. 30 Rock’s Scott Adsit gives Baymax real personality and it’s safe to say the squishy hero is a firm favourite that the whole family will fall in love with. The dynamic between all three characters are excellent and really drive the story forward. Having Maya Rudolph as their Aunt Cass is also a joy.

The Disney short that plays at the front of Big Hero 6 is also sublime and is worth the admission price alone. Feast tells the affectionate story of a puppy who likes to eat junk food. When his owner finds true love, it looks like all of the dog’s favourite treats like pizza and nachos will be replaced by salad! It’s one of the best short-movies I’ve ever seen and makes you chuckle whilst successfully tugging at your heart strings. The animation is gorgeous and joins La Luna as one of the best shorts the studio has ever produced.

Big Hero 6 is a monumental success. Not only have Disney created a brand new set of amazing characters, they’ve crafted a movie that will be revisited for years to come. With this kind of invention, we surely must have a sequel on the horizon. Baymax is an amazing character and has instantly become one of Disney’s all-time greats. Throw in amazing vocal support and breathtaking visuals and you have the best animated movie of the year.