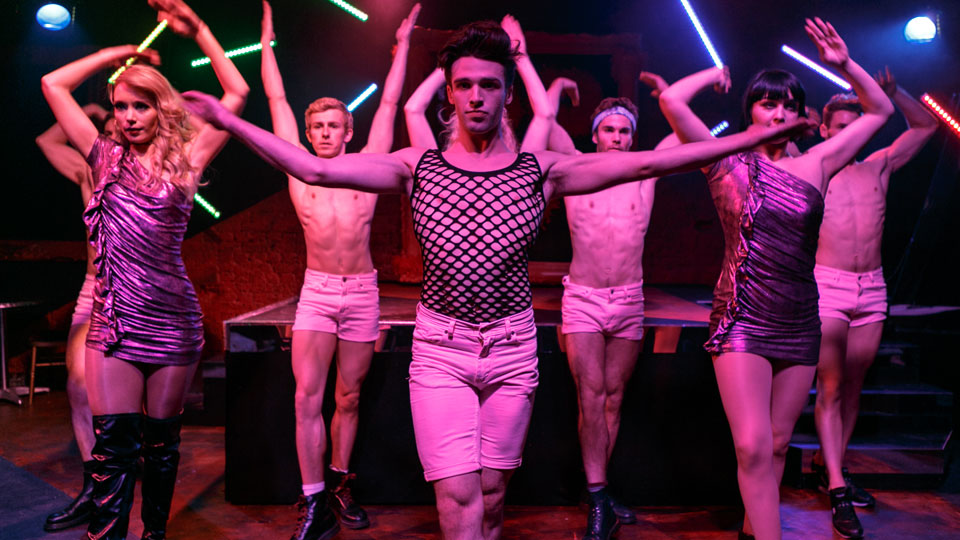 With a book by Beautiful Thing’s Jonathan Harvey and music and lyrics from Pet Shop Boys, some of the smartest writers in pop, Closer to Heaven was expected to be a match made in, well, heaven when it launched in 2001. The critics thought otherwise (apart from an almost legendary, scene-stealing turn by Frances Barber) and the musical closed the same year it opened. The Union Theatre plays host to the first revival of the very-British musical, but should it let sleeping flops lie?

Unfortunately, it’s abundantly clear why the musical had such a short shelf-life – Closer to Heaven is nearer to hell. Harvey’s book is by far the biggest offender (of a long, long list). The writing is dreadful. Clichés abound at every turn and the dialogue feels written by a person who has never actually heard how people really talk. Trite doesn’t come close. To call the characters one-dimensional would be over-egging the pudding – lecherous record producer, fading club queen and a closeted dancer called ‘Straight Dave’ who renders the nickname redundant as soon as he sashays on stage.

The plot, as it is, follows star-crossed lovers, drug deals gone wrong and long-lost family. But no one cares.

But, wait – the music comes from Pet Shop Boys, often cited as lyrical legends and purveyors of classic pop, all is saved! Not quite, but here’s where the review gains a star. The songs are serviceable and do have some memorable melodies scattered around the toe-curling lyrics. To be entirely fair, the sound at the Union Theatre really does the songs and the performers a disservice, where the synths should be stabbing, they merely prod. Philip Joel’s tight choreography does fare better, making use of the tiny space.

The acting is incredibly uneven but, again, there is only so much you can do with the dialogue – even Maggie Smith would struggle to raise a smile from some of the dire one-liners.

It looks as though the run is sold out and Pet Shop Boys die-hards will hopefully find something to enjoy here but for everyone else – avoid.