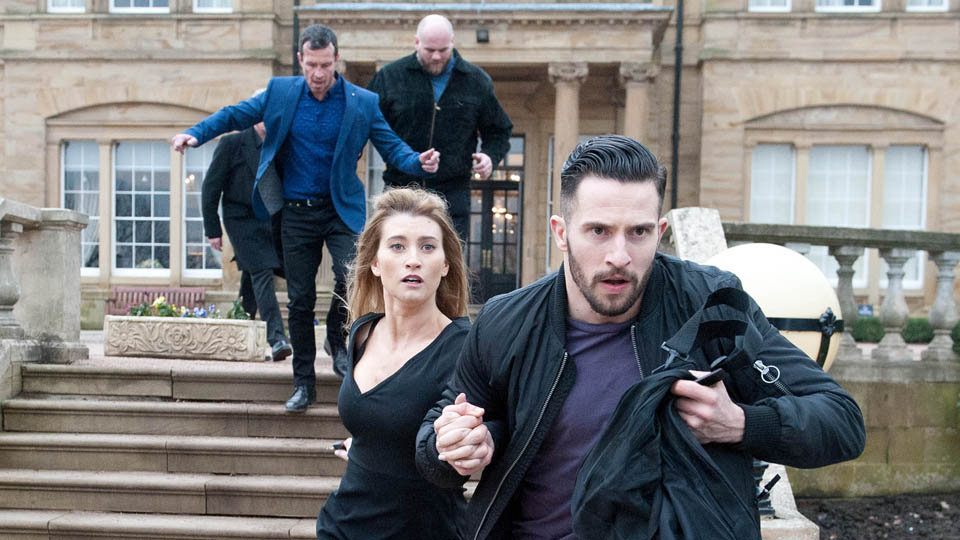 Welcome to our guide to the week ahead in Emmerdale and poor Debbie Dingle is in the middle of two very different brothers.

With Lachlan thinking his dad, Donny, is the coolest guy on the planet it’s not long before he’s wanting to go back to Scotland and live with him, leaving Chrissie distraught.  Donny is still being chased by the mysterious Charlie to pay off a debt that’s owed and time is running out.  He threatens Chrissie and demands £10,000 from her before he leaves.

In her desperation to keep Lachlan she ropes in Ross to set Donny up when he goes to deliver the money to Charlie at a hotel.  Needing some back up Ross tricks Debbie into helping him out, but when they arrive at the hotel and the truth comes out, Debbie is furious and storms off.  However, when she sees Charlie arrive with an armed thug, she goes back to help Ross.

Soon Ross has stolen the cash and the pair are being chased through the hotel, having to duck into a room to escape and inadvertently trapping themselves.  They get chatting and Ross opens up about Donna and lays it all on the line to Debbie, but will he get what he wants?

Later, Pete is furious when he learns that Ross involved Debbie in a potentially dangerous situation, but Debbie soon changes the mood by suggesting they get married, with Pete accepting with glee.  Ross, on the other hand, is fuming and when Chrissie refuses to give him his payment for the job,  he confesses all about the raid on Home Farm that him and Aaron did a few months back, landing Robert right in it.

Finn plans to get rid of Darren

Just what is it that Finn wants from Darren?  After all the fuss with Val sabotaging them initially and now Finn pretending to be a vegetarian and a Rick Astley fan (!) this week it seems Finn has grown tired of Darren.

Is Darren being a bit too full on?  After overhearing a conversation, Val is left as confused as the rest of us, but concocts a plan with Finn to ditch Darren.  When the plan backfires, will Finn be feeling more than guilt for messing Darren around?  He turns to Ross for advice who tells him it’s time to decide if Darren is worth fighting for.

David is nervous as he approaches the subject of sex with Alicia.  Meanwhile, Alicia realises how her situation has affected Jacob as she doles out his punishment.

Vanessa is struggling to hide her guilt over sleeping with Adam as Kirin’s 18th birthday comes around.  Will a few days away make it go away?

Lisa secretly pays Belle a wage for working at the factory, but how long can she keep up the pretence and can she afford it?

Kerry supports Dan as Sean’s condition demands that Dan visit him more at the hospital, two hours away.  She vows to earn extra cash to help him.