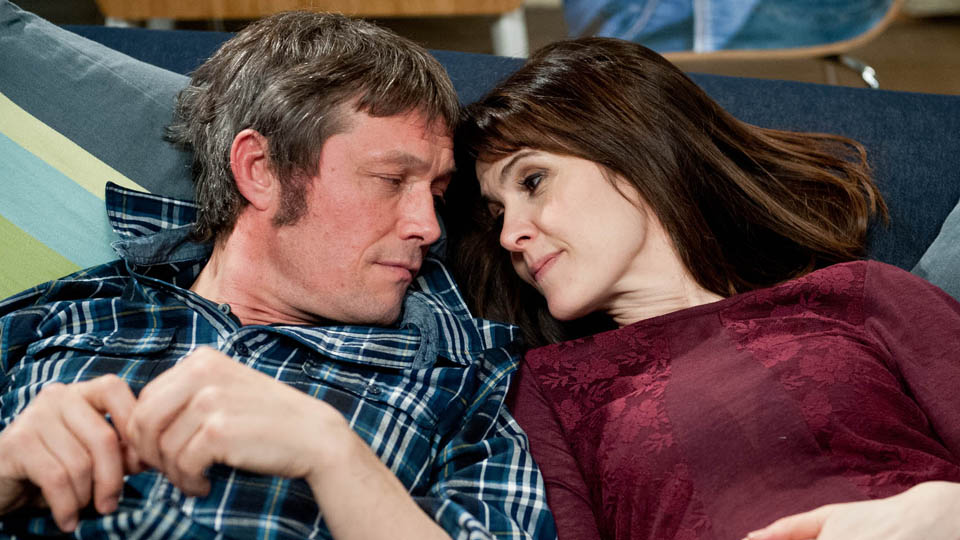 Here’s what to expect this week in Emmerdale:

James and Emma sleep together

Chas and Paddy have been spending a lot of time together recently, trying to sort out what is going on with Aaron, but she doesn’t seem to have noticed how jealous it’s been making her beau James.  It seems that Emma has though as she seizes the opportunity to stir things up for the pair and even tells Rhona about James’ suspicions.  Before long James has Chas reeling with his accusations.

Afterwards, who else should he bump in to, but Emma, who delights in all the drama when he explains he’s rowed with Chas.  She offers him a sympathetic ear and a drink back at her place and soon James is falling for her manipulative ways and the pair sleep together.

The next morning, James is feeling very awkward as he comes downstairs at Emma’s place and is torn when Emma reiterates his options;  come clean with Chas and risk losing her, or live with the guilt.  She further revels in the situation when she tells Chas she needs a word only for an alarmed James to walk in on their chat, but it seems she’s not done toying with him yet.

A guilty James confesses to Moira who encourages him to tell Chas before Emma beats him to it, which leads to a furious Chas insisting he leave and it seems she’s not the only one angry with him.

Following his court case for sexually assaulting Alicia last week, Lachlan gets a visitor.  His dad, Donny arrives in the village and already Chrissie is stressing out, especially as she told Lachlan that he couldn’t make it to court when the truth was she didn’t invite him.  Will he keep up her lie?

Donny’s arrival seems to have rattled Robert too with Aaron confused as to what is going on inside his hear.  Could it be the green-eyed monster he sees in Robert?  If so where does that leave him?

It seems that Donny has issues of his own as he takes a mysterious phone call and asks for more time.  One person, at least is pleased to see him, as Lachlan is clearly impressed by his dad’s bravado.  Will he still be impressed when Donny is witnessed by Debbie being bundled into a car and beaten up, before returning to Home Farm battered and bruised?  Chrissie assumes it’s the same people who she thinks attacked Robert because of Lachlan, and wants to call the police, but Donny persuades her otherwise.  Just what has he got to hide?

Carly uses an unsuspecting Jimmy to do her dirty work

Determined to get her belongings back from her ex, Sunil, Carly spots a gullible Jimmy and seizes the opportunity to get him to help her with his van.  As they pull up outside Sunil’s house, Carly goes in and soon the alarm off goes off, but she remains adamant that she’s getting ‘her’ stuff.  Jimmy lends a hand, but is thrown into panic when he hears police sirens.

When the pair are later questioned by the police, it ruffles a few feathers with Debbie on the war path, warning Jimmy not to ruin the business her mother owns half of before she has a heated argument with Carly.  Brenda is also less than pleased by Carly’s antics and the fact that Bob has handed her more cash, so threatens to leave, putting Bob in a predicament.

The police arrive to make an arrest at the Metcalfe’s house following Home Farm’s smash up, but just who have they come to collect?

Sam tries to convince Rachel of his loyalty as their relationship falters.

Rishi is dealt a blow by Georgia.

Whilst on a double date with Victoria and Adam, it becomes clear that Finn hasn’t been completely honest with Darren.

Ali and Dan are worried as Sean’s prognosis seems bleak.