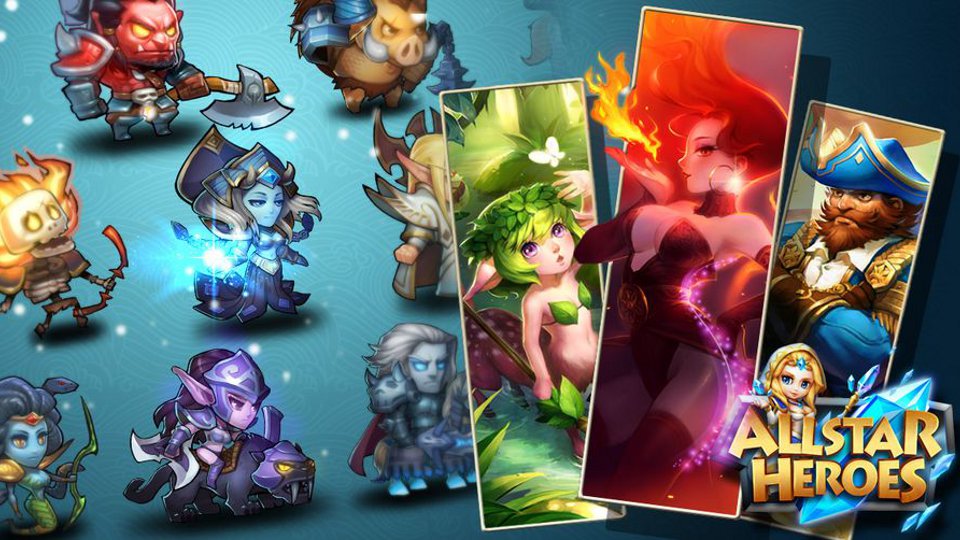 Allstar Heroes originally launched in China back in February 2014 under the name of Soul Clash. It’s also known as DOTA Legends in Taiwan. Created by Lilith Games it has performed incredibly well and often features towards the top of the grossing charts.

Now Lilith Games are bringing the game to the West for the first time under the new name of Allstar Heroes. They have also created a new publisher called Allstar Games to look after the game.

Before we start it is worth pointing out that the game might look rather familiar to some players. There is currently a copyright dispute going on between Lilith Games and a US studio who are alleged to have cloned the game.

Allstar Heroes is described as a mobile MOBA game. It’s all about collecting heroes, building the best team you can and then send them off on battles. The game starts with a short tutorial and is a little confusing at first until you get to grips with it. The tutorial introduces you to your first hero The Captain who is a pirate. He fills the role of a melee tank-style class and is designed to be at the front of battle.

This is a free-to-play online game and once logged in you are presented with a map of sorts which is actually the menu. Here you can select from a variety of locations which are all different activities. There’s a huge amount of choice on offer but most of it is locked to begin with.

Your first stop should be the campaign mode. Here you must travel along a Candy Crush style map. Each map is a chapter of the campaign and your journey is mapped out as a series of stops along the road. These are actually battles and you must beat each one in turn in order to progress.

Tapping the next available battle shows you a brief description, the enemies you will face and also the loot that can drop. From your available heroes you must select a team to tackle the battle.

Each battle is split into three waves. The action actually takes place automatically and you get to watch as your heroes go up against each wave. The game uses the stats of your team and heroes against those of your enemies. If your team is stronger then you have a better chance of winning.

During battle your heroes each have a special bar that fills up as they fight. Once a special bar is filled you then have the option of unleashing it when you choose. This is done by tapping the portrait of the hero. If you prefer you can also choose to have the game play your specials for you.

Choosing your team and unleashing specials is where the strategy element of the game comes into play. For example using a healing special is pointless when your team is at full health but it can turn the tide of battle if timed correctly. Similarly it’s a waste to use a special that deals large damage against the last enemy of a wave who is almost dead.

When heroes run out of health they fall in battle and can not be used until the next one. Keeping them alive is also essential if you want to get the full three star reward at the end of a battle.

A full battle can be over in as little as 20 seconds but most last a minute or two. As enemies go down there is a chance of loot dropping which you can collect by tapping on it. After completing the first two chapters you also unlock a heroic version of the campaign which is tougher.

Heroes gain experience and will level up as you play. A lot of your time is also spent managing your heroes. Gold can be spent on skill upgrades as long as you have skill points available which regenerate over time.

Armour and weapons that drops can be assigned to heroes capable of using them. Doing so boosts their stats and when a hero gets a full set of equipment you can promote them. Promotion increases their stats and allows you to begin collecting more powerful equipment. Reagents also drop during battles and these can be used to craft items for your heroes.

One the hardest items to obtain are soulstones. These are specific to each of the heroes in the game and you need a set amount to summon a new hero. Once a hero is summoned they are then available for team selection.

The campaign will keep you busy but there are plenty of other distrations that unlock once your team levels up. One of the first to unlock, and also most addictive, is the Arena where you can face your team off against the teams of other players. You can challenge a team in the Arena every 10 minutes. If you are successful then you swap ranks with the losing team.

As you level your team higher you can unlock Guilds, Challenges, Trade, Enchanting and more things to do. The game has an impressive amount of content already and there is even more planned. As you play the game tracks your achievements which are used to complete quests. These reward you with items, gold and experience.

Being free-to-play the game also falls into the trap of pay-to-win where you can exchange real cash to progress quicker. However it is also extremely generous with things like food (used as energy to take on battles) and rewards for succeeding. We haven’t found ourselves stuck for things to do or felt the need to stump up any cash during our many hours of testing.

Graphically the game is absolutely gorgeous and it feels very polished. The heroes look superb in action and they each have lovely portraits you can look at. It’s quite a complex game but the user interfaces on the various screens are very well thought out.

Even in its preview state Allstar Heroes is shaping up to be a fantastic game. It’s insanely addictive and heaps of fun. We’ve found ourselves losing hours at a time to it but it is also perfect for a quick gaming fix if you only have a few minutes to spare. We can’t wait for the launch and think fans of RPGs and MOBA games will fall in love with it.

Allstar Heroes is expected to launch sometime in April 2015 for iOS and Android devices. There is also currently a Closed Beta event in the UK for Android devices until April 14th. To celebrate, Allstar Games has a reward promotion that you can access here.