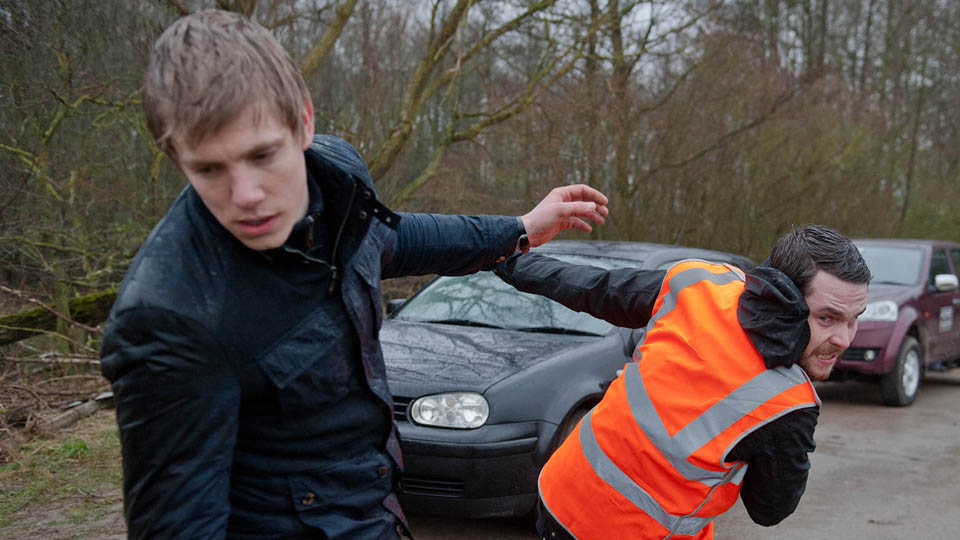 Welcome to our look ahead to what’s happening in our favourite Yorkshire village this week.

Aaron lashes out at Robert

Chas is concerned about Aaron and feels he’s pushing himself too hard.  She thinks that Robert is the issue and Paddy warns him to stay away from Aaron, but has it just made him worry for Aaron too?

Later on, Robert sees an overexerted Aaron being sick in the car park and approaches him, but will Aaron give him an explanation?  It seems that Robert wants to help and there’s no doubt in Aaron’s mind who has lifted his fundraising account to a new high of £2000.

Robert tries to get Aaron to open up, but he refuses leaving Robert to think of a new tactic, but it backfires when Aaron lashes out and flies into a rage before leaving a roughed up Robert fearful of what he might do next.  Robert tries to get cleaned up before Chrissie sees him; how will he explain what’s happened?  Meanwhile, back at the pub Victoria sees Aaron washing his bloody knuckles and knows something is wrong.  Aaron is left with a decision to make.

Edna can’t sit on what she suspects any longer and confides in Paddy and Vanessa finds Pearl’s IOU book, leaving the vets flabbergasted.  Paddy in particular struggles with the enormity of her betrayal as Ashley advises Pearl to admit to her mistakes as the only way to make amends.

Pearl clearly listens to Ashley as she goes to the police and admits fraud.  She also does a deal with Eric and gives the money to Edna and Ashley to repay Paddy and Rhona before revealing she’s leaving the village.

Paddy and Rhona are torn as they discuss just how much Pearl means to them, but have they left it too late?

Will Jimmy and Nicola make it to Dubai?

As Nicola gets ready for the big move, Jimmy is less excited and realises that only something drastic will stop them making the move.  The idea of being a househusband in Dubai just doesn’t appeal to Jimmy so he puts  plan into action.

Nicola tells Jimmy how important Dubai is to her, but he just can’t seem to empathise leaving them with a heartbreaking decision when she realises what he’s done to stop her taking Angel.  Later, Jimmy has a shock proposal for her.  As they head to the airport just who will be going to Dubai?

Adam buys Victoria a car for her birthday present….and an engagement ring.  Will she agree to marry him?

Doug confides in Diane his fears about Laurel and her drink problem.

Chrissie apologises to Alicia for Lachy’s behaviour and assures her David’s kidnap escapade is in the past, but is Lawrence willing to drop it?

Ross finds out that Carly is related to Donna, but can he resist her?  Her jilted fiancé turns up in the village asking for money too.

Emma and Val are both worried about Finn getting too involved with HIV positive Darren.