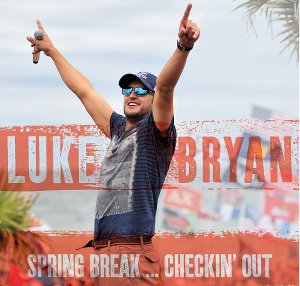 Country superstar Luke Bryan played his last Spring Break concert recently following years of entertaining fans at Spinnaker Beach Club in Panama City Beach, Florida. Since 2009 Bryan has been releasing Spring Break albums to accompany his free performances serving up new songs for his fans. To tie in with his farewell Bryan has released Spring Break…Checkin’ Out which includes all of the tracks from his 2014 release Spring Break 6…Like We Ain’t Ever alongside five new tracks.

Of the new songs Spring Breakdown is the highlight of the bunch. It’s the most personal track on the album and sees Bryan giving thanks to his fans as he reflects on the success and the growth of his epic shows. There’s no doubt it’ll be special to those fans who went to the gigs and a song that Bryan will associate with great memories. Elsewhere Bryan sings over an R&B style guitar riff on the relationship questioning Games, and pushes his country twang on Checkin’ Out which celebrates the hedonistic fun that Spring Break entails.

The other songs on the record were released on Spring Break 6…Like We Ain’t Ever and two of them featured on the recent deluxe re-release of Bryan’s album Crash My Party in the UK. The laidback sing-a-long of She Get Me High is a breezy summer song and Good Lookin’ Girl combines a rockier feel with banjo riffs for a catchy melody. The album closes with the mid-tempo Are You Leaving With Him which sees Bryan asking a girl if she’s leaving with another man or choosing him.

Spring Break…Checkin’ Out is a perfect way to call time on Bryan’s incredible Spring Break success. We’re fairly sure that there’ll be a big gap in fans’ Spring Break celebrations next March but Bryan has expressed his hope that another artist carries on his tradition. Either way we’ll always have his EPs to remember all the good times.