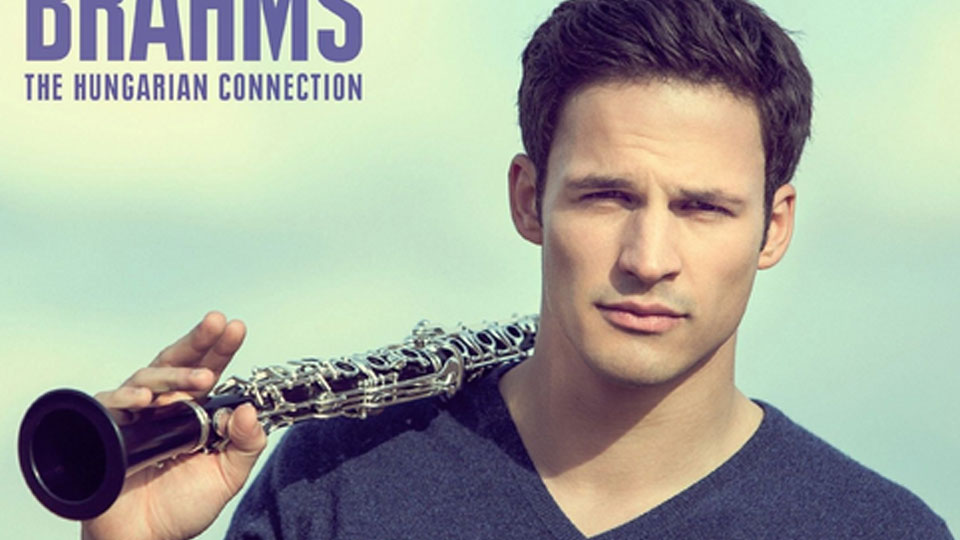 The Austro-Hungarian musician Andreas Ottensamer (principal clarinettist of the Berlin Philharmonic Orchestra) is following up his debut album Portraits – The Clarinet Album, with one that explores his own partially-Hungarian origins through the music of Brahms, who was influenced by traditional Hungarian music. Some more overtly Hungarian-sounding pieces round out the album.

The Hungarian connection in Brahms’ output is certainly subtle, if not at times tenuous for the casual listener, but Ottensamer, accompanied by four other world class musicians (comprising a string quartet), opens by giving his take on Brahms’ Clarinet Quintet: some of the best-known movements that showcase the instrument. The Clarinet Quintet takes up the first four tracks of the album, but well over half the running time, since three of the four movements are over ten minutes in duration.

The Clarinet Quintet is a sublime marriage between clarinet and strings. It opens with the Allegro movement, in which Brahms’ pastoral influences are very evident. This is followed by the Adagio, which is just as melancholic, if not gloomy. They are followed by Andantino, which is a more uplifting version of the Allegro. It rounds out with a relatively sedate telling of the Con Moto, in which the harmonics between clarinet and string are arguably at their most impressive.

Also included on the album is the Two Waltzes in A Major, also by Brahms, which run into one another, the second being the more uplifting and traditionally Viennese of the two. The last pieces by Brahms on the album are the short, sweet and lively Hungarian Dance No.7 in F major and the longer, more dramatic Hungarian Dance No.1 in G minor, which are the first instances of the busy strings that is the hallmark of the Hungarian folk music tradition. The second, longer piece, in which Ottensamer’s clarinet converses with the strings, reveals Brahms’ Hungarian influence at its height. It is electrifyingly good and comes to a stunning fast-tempo crescendo.

This leads very neatly into two movements by Leo Weiner: The Woeful Shepherd and Barndance. Weiner may not be as well-known as Brahms, but his music complements the other tracks on the album, and neatly contrast with one another. The first is deeply reflective and morose, whereas the barndance is sure to get feet tapping with its energetic pace and use of the cimbalom.

Those enjoying the strongly Hungarian folk influence won’t be disappointed by the final track, which is a medley of traditional dances from Transylvania and is a great piece of music. The accordion and cimbalom accompaniments are instantly evocative of the Eastern European musical tradition, and it represents another dramatic build to a thrilling conclusion. Throughout it, and the other tracks, Ottensamer’s clarinet offers a rich tone and haunting sound.

There’s no denying the excellence of the musical accomplishment throughout Brahms: The Hungarian Connection, but the only danger is that the album for some may fall between stools. Those looking for a fine recording of Brahms’ Clarinet Quintet won’t be disappointed by the early tracks, but may see the later non-Brahms tracks as a distraction; whereas those approaching the album for a Hungarian folk sound may be impatient in finding it in its purest form only in the later tracks. The best way to view it is to see the Hungarian influence increasing in strength as the album progresses.

Overall, there is a connection in the music, and Brahms – The Hungarian Connection almost coalesces into a coherently-themed album. What is consistent is Ottensamer’s melodic skill for the clarinet, which unites every track.