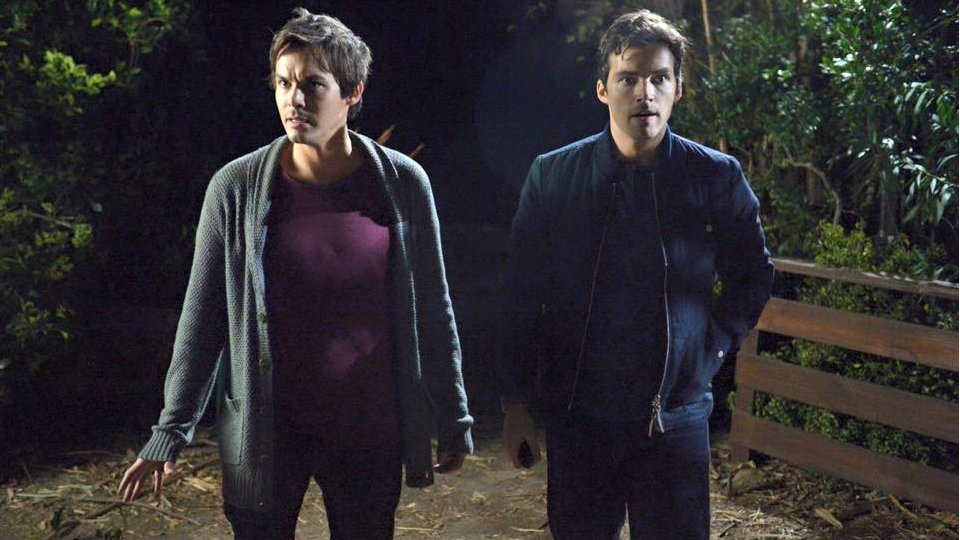 The verdict arrived at Alison’s (Sasha Pieterse) trial this week and it looks like she isn’t the only one going down.

If you haven’t seen the latest episode of Pretty Little Liars and don’t want any spoilers we suggest you stop reading now. If you have seen it and want to relive all of the action then keep reading.

Under a bus you go…

Lesli Stone (Elizabeth McLaughlin) made a very unwelcome return to throw everyone under the bus this week. The alleged friend of Mona (Janel Parrish) took to the stand for Ali’s trial and proceeded to throw all of the liars and Mike (Cody Allen Christian) under a bus. She claimed Hanna (Ashley Benson) had been stalking her and had refused to let her in Mona’s room.

Aria (Lucy Hale) decided it was best that Mike get out of town after a delivery of a tongue arrived at the Montgomery house. Turning to Ezra (Ian Harding) for help, much to the anger of Andrew (Brandon W. Jones), Aria asked if he would take Mike to his cabin for a while so he would be away from A’s watchful eye. Oh Aria, surely you know by now that A is everywhere!

Ezra and Mike arrived at the cabin to find a furious Caleb (Tyler Blackburn) who pleaded with Mike to go to the police and tell them everything he knows. Little Montgomery started to come round and took off with Ezra’s car. Ezra and Caleb chased after him, once they finished their row about what Mike should do, and found the car abandoned with an arrow through the windscreen. As they searched for Mike they were targeted by an archer (presumably A) and had to take cover. Meanwhile Mike was sprayed in the eyes with pepper spray and tied up.

Caleb and Ezra found him and as Ezra untied him, Caleb took a picture as proof of A’s handiwork. The gang then headed to Rosewood PD to speak with Tanner (Roma Maffia) but found she was less than sympathetic. She told them they needed to report the crime in the district that it happened, questioned Caleb’s decision to take a photo of Mike in peril, and pretty much ignored them setting Caleb off on a rant about the corruption of the police department.

Following Lesli’s attempts to implicate everyone in Mona’s death, Alison told the girls that she believes someone else was in the park on Thanksgiving night that could give her an alibi. Spencer (Troian Bellisario) and Emily (Shay Mitchell) did a bit of sleuthing and found out that a church group regularly cleaned up in the park. At school they saw a girl called Kendra (Kanya Iwana) who had the group’s emblem on her jacket. As they quizzed her she freaked out and had a go at Ella Montgomery (Holly Marie Combs) for telling Aria her secret.

What did Kendra have to hide? Ella came clean to Aria and told her that Kendra had done drugs and spent Thanksgiving Day hiding in the park until she sobered up and could return home. Once her secret was out, Kendra turned up at Spencer’s and spoke with Rebecca (Lauren Tom) about what she saw and heard. Hopeful that they could prove Ali’s innocence, Spencer and Emily were furious when Rebecca said she wasn’t a viable witness.

During their prison duties in the laundry room, Ali and Hanna injured themselves so they could get a chance to talk about the cryptic note found in Mona’s mirror. Ali handed Hanna a note and was spotted by Rebecca who demanded they hand the note over to her. Did Ali crack it?

Alison on the stand

Rebecca decided to put her on the stand this week as a last ditch attempt at convincing the jury that she was innocent. Her argument was built around an elbow injury that Ali suffered as a child meaning that there was no way she could have attacked Mona in the way the person in the video did. She demonstrated her point by having a little game of catch with Ali but the prosecution shattered her argument by digging out an archery certificate from when Ali was 11. Bizarrely Ali didn’t have anything to say when questioned about it but told Rebecca after the trial that she rigged the results of the contest after bribing her camp mate. Maybe she didn’t say anything as admitting you’ve manipulated people and lied for years isn’t likely going to help your case…

The road back to Spoby

Spencer finally fessed up about her kisses with men that aren’t Toby (Keegan Allen) to Emily. Claiming that her relationship with Toby is pretty much finished following an awkward encounter at he court house, it was surprising when Toby turned up at the Hastings house later in the episode and told Spencer that he wouldn’t choose between her and the police badge but that Tanner was forcing him to by refusing to let him work on Mona’s case. He also explained that the reason he joined the force was to protect Spencer and the two shared a rather passionate kiss. Will Spencer tell Toby about her little flings?

Andrew spent most of the episode behaving very strangely, which smells like a pretty massive red herring to us. First he was angry art Aria for turning to Ezra for help, then he promised he was there 24/7 for Aria but didn’t answer her call when she frantically called him for help finding Mike. When quizzed on it he claimed his phone had died whilst he was working on his yearbook entry. Aria, who is in charge of the yearbook entries, looked over Andrew’s and found that he was a Path Finder Scout. Was it Andrew who terrorised Mike, Ezra and Caleb? Could he really be A?

The jury returned their verdict and found Alison guilty of first-degree murder. As Ali cried, Tanner arrived at the court and arrested Aria, Spencer and Emily. The three had their fingerprints and their mugshots taken. The episode drew to a close with A putting dolls of the girls in a castle…

Tune in to ABC Family at 8/7c on Tuesday in the US and Netflix on Wednesday in the UK for the season 5 finale. Watch the promo for Welcome to the Dollhouse below: