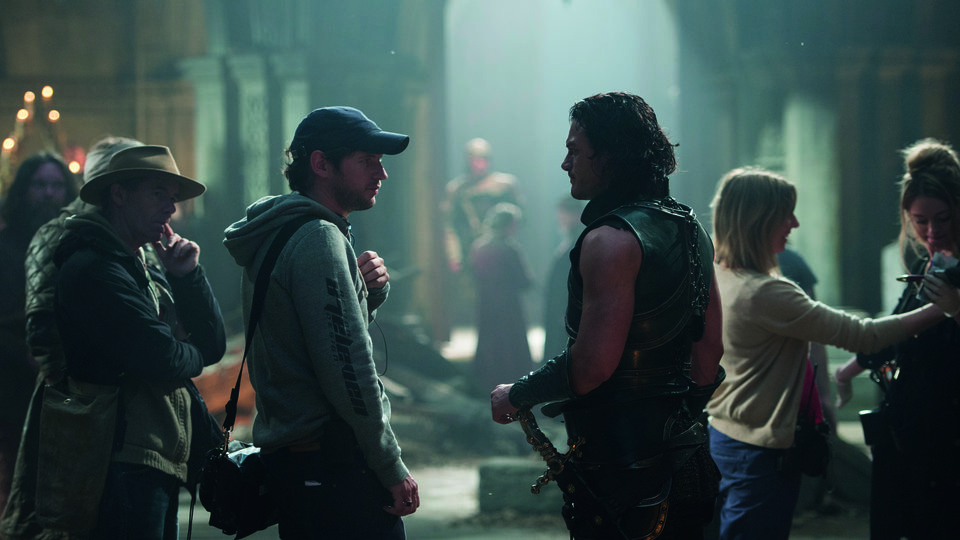 Dracula Untold is out now on Blu-ray & DVD from Universal Pictures. To celebrate, EF’s Jason caught with director Gary Shore, who delved into the making of this superior blockbuster.

For almost a century, the legend of Dracula has mesmerized audiences with the story of a charismatic royal who feasts on the blood of innocents after the sun goes down. Dracula Untold reveals the man behind the myth in the thrilling, action-packed tale of Vlad III, Prince of Wallachia (Luke Evans), who makes a terrifying deal with a supernatural ally that will allow him to save his family and his country – at the cost of his soul.

Check out our review of Dracula Untold.

How did you first get involved with this project Gary?

I got the script, read it and thought it was very interesting and a different take on the Dracula mythology. It was a great opportunity to tell an anti-hero story… to tackle this legend of cinema and literature.

Luke Evans is sensational in the movie. What did he bring to the table and how impressed were you by his performance?

Luke was incredible to work with. I felt very fortunate that he was available and that he was on board – he was committed. So many superlatives! Working with Luke was just great. First and foremost, as a person he is incredibly generous to work with, he was very technically proficient and very focused. His professionalism was exemplary. He came in with a lot of ideas, he had done all the research, done his homework and he was prepared on the day. We spoke a lot before we shot the film, so on the day of shooting there was very little that needed to be discussed – which is the way I wanted it. It’s very expensive there to be shooting [on location] and he was incredibly prepared.

We had all the discussions beforehand so we were very clear. I didn’t want to be getting into too much discussion on who the characters were and what we were doing – it’s just not the time to do it. Running up to it, Sarah Gadon, (again she was incredibly easy to work with), came well prepared and had great chemistry with Luke. They spent a lot of time talking over character stuff. In the three or four weeks running up to the beginning of principal photography, there are so many things going on so you needed to make sure of where you are. So all the supporting cast just talked through everything. Although there was inevitable stuff that came up on the day, things do get changed. But we’re lucky we prepared.

Was there room for improvisation during scenes because the rapport between the cast feels so organic?

Any kind of improvisation would inevitably end up on the cutting room floor because if it didn’t support Vlad’s story there was no point in it being there… I was pretty ruthless when it came to post production and we were editing. But when we were there on the day, yeah there was always that bit of freedom but we had to be careful as well that we don’t deviate from the plan and the story we are telling. The movie is fantasy-action and the plot moves so fast that everything has to be on-point. It would be different if we were doing something a smaller contained drama, which is a lot less plot-dependent.

The cave scene with Charles Dance was fantastic – what was that like to shoot?

Charles was an intimidating character both on screen and off to say the least! We got on very well. We had a couple of days… we were in the process of doing re-shoots (which is mayhem as it’s happening). We were only able to cast Charles 3 days before. We had to get all the prosthetic make up done and costumes designed and we only had 3 days with him when it came round to it, so everything was fast. I barely got to spend a lot of time with him but again, he was a very prepared professional actor who came in with his own ideas.

The whole scene between himself and Luke – these are two guys that are very proficient in what they do, both with their own ideas. The only thing I could do is get out of their way and let’s see what they wanted to do with the scene – how they’re going to move around it. And then I started working and moving the camera accordingly to try and give them as much freedom as possible. It’s a 6 or 7 minute long scene of dialogue… that’s their stage, let them do what they need to do to make themselves feel comfortable and then I will walk around accordingly.

Why do you think the legacy of Dracula stills appeals in this day and age?

The story will always be interesting to people and the idea of the complexity of a man who is torn between the love of his wife who was taken away from him and this pain that he has to endure over those years – at the same time, being this blood sucking creature of the night. There is a duality there that will always be fascinating to people no matter what period you put that in. If this story was told 2,000 years ago or 4-5,000 years ago it would still be as interesting as it is now because the essence of the story… it won’t change.

Would you like to revisit these characters again for a sequel?

Yeah I would. There is a lot of things we didn’t get to do and I imagine it being a trilogy- there is a lot of set up that has to happen in the first part of the trilogy and the second part, you have already established the basis of those characters. I loved working with Luke and Sarah, I loved where we were just starting to go. If you look at it as a trilogy, that was only the opening, the second would be a lot darker and it would be a lot more in tune with the Dracula that people know from Bram Stoker’s book.

There are some wonderful locations featured in the movie- was it a challenge to shoot in some of these locations?

Yeah. The American crew that were coming over had said ‘It’s raining and it’s muddy and it’s terrible’. I said yeah but that’s like Summer time in Ireland- I’m pretty used to this! So for me I was just focused on the job. I wasn’t lugging lighting up the side of the mountain, trying to park a truck on the side of the mountain. For the crew it was difficult, it was very difficult! You have these roads that are just inaccessible, there are these one-way roads and you have to park 20 trucks on this one road. So the location crew did a great job at trying to figure all this out. I just sort of lounged around in the day and said ‘hey, put the camera over here!’

Are you fond of the horror genre and which scary movies have had a personal impact on you?

The Shining is one of my all time favourites. I think probably if I was to deviate from horror a little, for me one of the greatest horror movies, a psychological horror really if you want to push it, is Seven. It is a chilling film for me to watch when I was 14 and realising that the love interest’s head ends up in a box! The funny thing was never seeing any kind of graphic violence happen. I want to see the after-effects. It had this profound effect on me and how I looked at horror afterwards because it didn’t have to show the after-effects. That just stuck with me as a foreign concept. In terms of what would be my most fond horror movie, that would be Evil Dead 2. Another all-time classic horror would be Alien, and if you wanted to extend that, Jaws.

Many believe that we are in the golden age of TV, and that it’s overtaking Film. What do you think?

You can work on a far grander scale and to be able to tell a story over 10 or 30 episodes is a daunting challenge to say the least, but it allows you to explore characters. If I didn’t have to cram everything into the first 30 minutes and actually spend the time with those characters and get to know them over the course of 10 episodes, you’d have a lot more freedom. Personally, I love the idea of telling stories over long periods of time and I would embrace it completely if the opportunity came up.

The most recent thing I’ve started to do is a short film anthology which deals with different holidays – well known holidays through out the year. It will be a lot of fun. A bunch of really talented film makers are doing this including Kevin Smith, Matt Johnson and Scott Stuart. After finishing Dracula I just got married, I went back to LA and I’m only now just starting to read again. I’m not in any rush. There’s a couple of things that I’m writing at the moment but we’ll see.

Dracula Untold is out now on DVD, Blu-ray and VOD.