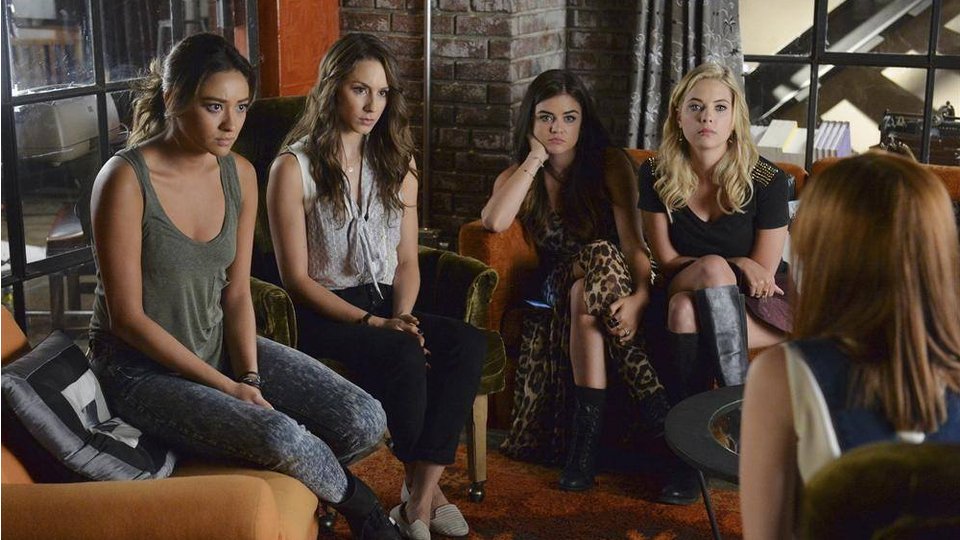 There was a lot going on in this week’s Pretty Little Liars with plenty of new plots kick-starting and progression for many on-going ones.

If you haven’t seen the latest episode of Pretty Little Liars and don’t want any spoilers then stop reading now. If you have seen it and want to relive all of the action then keep reading.

Detective Holbrook (Sean Faris) made a very dramatic return to Rosewood this week and was quickly given the heave-ho from his job. Caleb (Tyler Blackburn) and Hanna (Ashley Benson) were present to witness him storm out of the police station.

The liars tried to stay out of Holbrook’s way but Hanna wasn’t so lucky when he pulled her over on a quiet road. Holbrook became very intense grabbing hold of Hanna and accusing her of kissing him on Alison’s orders. Hanna accused Holbrook of working with Alison but he denied it claiming that he had been investigated by Internal Affairs and thrown off the case before losing his job.

Is Holbrook a good bluffer or is he genuinely innocent?

The liars were surprised when a friend of Mona’s arrived in town. Lesli (Elizabeth McLaughlin) isn’t someone any of the girls knew but she claimed to be close to Mona and was staying at her late friend’s house. Hanna was assigned the duty of keeping an eye on Lesli and the two spent much of the episode together.

Hanna had some flashbacks about her time with Mona all connected to a book of scary stories she used to enjoy reading. When she finally got some time alone in Mona’s bedroom, Hanna realised the book (which Lesli had been carrying around) was rattling. Investigating further she found a tape and on it was Bethany Young talking about her hatred of Alison.

At the end of the episode A was seen in Mona’s bedroom looking for the tape.

Whose side is Spencer’s mum on?

Spencer (Troian Bellisario) informed the liars that her mother Veronica (Lesley Fera) was consulting for Alison’s (Sasha Pieterse) defence team. Worried that Veronica could help Ali get out of prison, Spencer assured the girls that all she was doing was getting as much information about the case as she could.

Veronica carelessly left her files on the kitchen counter allowing Spencer to snoop and photograph the prison visitor’s log that revealed that Mike (Cody Allen Christian) had visited Alison. Spencer gave that information to Aria (Lucy Hale) so she could start to investigate what her brother was up to.

It was also revealed that the police were still analysing the contents of the barrel but that the blood spots found next to it belonged to Alison. Is this proof that she did it or is she being framed by A?

Mike gets mean, moody and mysterious

Mike’s spell as a nice guy came to an abrupt end this week. Aria tried to talk to him about visiting Ali in jail but wimped out when Mike told her he was watching a list of Mona’s favourite films. Mike then gave new girl in town Lesli a stern talking to after he saw her with Hanna in the Brew holding one of Mona’s books. Lesli told Hanna that she thought Mike had argued with Mona the night before she was murdered.

Concerned about her brother, Aria followed Mike out of the house and found him in the woods by the lake. After he left she went to investigate the dock he’d been stood on and found a packet of sweets. As she turned around Mike had returned and the siblings shared a tense exchange where Aria asked him why he was visiting Ali. He refused to tell her anything and Aria pleaded with her brother not to see her again. Mike warned Aria to be careful going back through the woods and left.

Later in the episode Mike went to visit Alison again despite Aria’s pleas. What is he up to?

Jonny shows off his artistic side

Mysterious newcomer, and Hastings barn lodger, Jonny (Will Bradley) was hired by Ezra (Ian Harding) to create an installation for the new-look Brew. Trying to encourage Spencer to help him (Spoby fans will likely be up in arms!) the artist created a Whisper Catcher that allowed patrons to talk through a microphone connected to a desk that people could sit at and listen in by creating headphones with their hands after placing their elbows on two pads (yeah we don’t get it either). Is Jonny going to make a move on Spencer?

The start of Emilia?

It wasn’t all murder investigations and secrets this week as Emily (Shay Mitchell) took a break from the drama to focus on her love life. After Talia’s (Miranda Rae Mayo) revelation last week that she’s interested in her, Emily spent much of the episode trying to figure out if romance was on the cards. Many mixed signals happened throughout the episode but Emily decided to be bold following a conversation with Caleb and used Jonny’s newly installed Whisper Catcher in the Brew to let Talia know how she felt. Emily then went in for a kiss which was quickly reciprocated.

Pretty Little Liars continues Tuesdays at 8/7c on ABC Family in the US and Wednesdays on Netflix in the UK. Watch the promo for next episode Out, Damned Spot below: