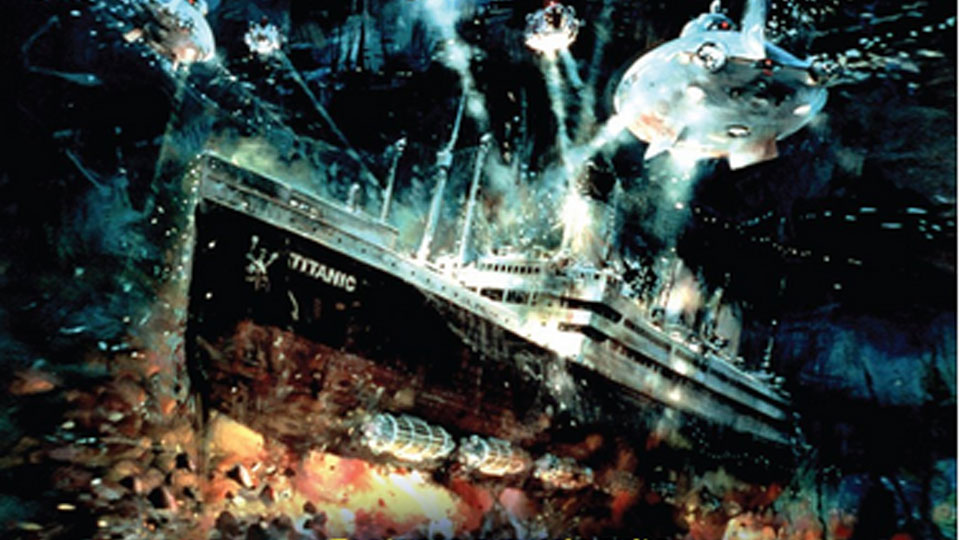 Raise the Titanic is one of those movies best-remembered for its infamy rather than for its merits. Justifiably? Well, we’ll come on to that, but the big budget spectacular is a rare misfire from producer Lew Grade and his ITC company, who gave us most of the great and memorable television in the 60s and 70s. A rare misfire, but an extremely costly one, since the expensive movie sank without trace at the box office.

Raise the Titanic (and the Clive Cussler novel upon which it is based) was made before the actual discovery of the wreck, so it can’t be blamed for the inaccurate intactness of the ruin as depicted in the film (the actual Titanic broke apart on hitting the ocean floor). Whilst finding the ill-fated ship ought to be excitement enough, Raise the Titanic injects Cold War paranoia and espionage into a muddled  and far-fetched plot that sees an American agent apparently stowing a rare and valuable mineral on board the Titanic shortly before it sank in 1912. The only known place on earth that has the mineral is Russia, yet the Americans need it for a new defence system. This sees a race between the West and the USSR to locate the remains of the Titanic, bring it to the surface and salvage the stowed rare mineral. However there are many dangers underwater and huge risks to those involved before they can successfully complete the enterprise.

Relating the plot’s MacGuffin highlights the many problems with the movie. The absurdity of the narrative leaves the film unengaging, and the only real hope of keeping the audience on board is some magical performances by charismatic actors. Alas, Richard Jordan is passable as the heroic Dirk Pitt, charged with finding the Titanic, but he never shines. It’s sad to talk of the limitations of an actor who died far too young, yet Jordan never had star quality and is a weak leading man. Even so, and not to the movie’s credit, he still outshines David Selby as his troublesome colleague. A few veterans give the audience something worth their time. There’s a lovely cameo by Alec Guinness as the last remaining survivor of the Titanic crew. With a warm performance, his Ealing Comedies’ wry smile dusted down to good use and a twinkle firmly in his eyes, his all-too-brief appearance is undoubtedly a highlight. Jason Robards, utilising his familiar hard-man, austere repertoire, is equally fine as the no-nonsense Admiral James Sandecker, in charge of the operation.

Another element in favour of the film is the visual spectacle of the enormous model of the Titanic that was constructed for the movie, as well as the incredible sets achieved by redressing an out-of-service vessel. Pioneering for the time, it’s the underwater sequences that remain the most convincing, since the actual raising of the Titanic suffers from exactly the same problem that water-based model work always does – and the movement of the water betrays the illusion. (Nevertheless, it still beats CGI.) The film, running to two hours, feels long, and perhaps a bit of judicious editing of the ponderous model sequences might have been called for. As a viewer we’re asked to be constantly impressed by the same model work, whilst characterisation and plot take a back seat.

Undoubtedly, the film is a mess. The greatest thing about it by a long way is the incredible musical score by John Barry, who seemed to be able to turn in phenomenal work even when faced with uninspiring raw material. The late composer, best-remembered for his Bond and Harry Palmer themes, achieves a lot of suspense, tension and excitement that the film would otherwise be lacking. It’s partly down to his sumptuous melodies that the payoff of seeing Dirk Pitt standing aboard the remains of the Titanic is a great cinematic moment – a beacon of brilliance surrounded by mediocrity.

Despite the many failures of the film, taken as a whole, it remains an entertaining yarn; just so long as you don’t think too hard about the plot and you have the patience to endure wooden characterisations.

Extras on the disc include a musical suite of John Barry’s score (highly recommended), a trailer, and image galleries that document the sad decay of the Titanic model used in the movie over time.