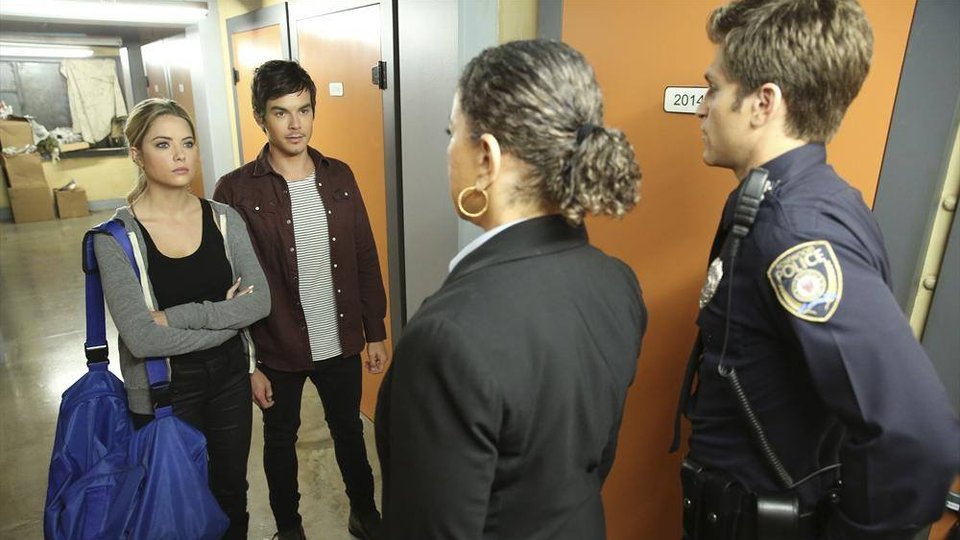 The mystery of the barrel continued in the latest episode of Pretty Little Liars as Hanna (Ashley Benson) took matters into her own hands to try and avoid being blamed for a murder she didn’t commit.

If you haven’t seen the latest episode of Pretty Little Liars and don’t want any spoilers we suggest you stop reading now. If you have seen it and want to relive the episode then keep reading.

What’s in the barrel?

Since Caleb (Tyler Blackburn) dropped the bomb on Hanna last week that the storage unit containing evidence related to Mona’s (Janel Parrish) murder was registered to her, the teenager has understandably been worried about being framed for the murder. Ignoring the advice of all of her friends, Hanna did her research online to equip herself with the right tools to break into the storage unit and remove the barrel without anyone knowing.

Of course Caleb was convinced to help her out and the two headed off to the storage unit to break in and move the barrel. Thanks to Hanna’s research, they were equipped with all of the right tools and quickly gained access to the unit after disabling the camera. Once inside everything had been removed with the exception of the barrel and Caleb convinced Hanna not to touch it so she doesn’t implicate herself any further.

On their way out of the storage unit they were surprised when Tanner (Roma Maffia) and Toby (Keegan Allen) met them in the hallway. Taking note of Hanna’s large bag (of evidence covering materials), Tanner let them go before she and Toby went into the same storage unit. Once in there they opened the barrel with Toby covering his nose to block out the stench. Is it Mona? That wasn’t confirmed but it was clearly definitely unpleasant. Tanner also noticed a spot of blood on the floor behind the barrel and warned Toby that she would be questioning his friends as a first priority.

Whilst Hanna was having barrel panic, Aria (Lucy Hale), Spencer (Troian Bellisario) and Emily (Shay Mitchell) clubbed together after Spencer noticed that Mona’s laptop had been moved. Convinced that Hanna and Caleb were responsible the trio headed off to find it and ended up at an abandoned ice cream factory. Emily suggested they all split up (seriously has she never seen a horror movie?) and the three girls covered different areas of the factory. Spencer found Mona’s laptop, which was playing a video of Hanna and Caleb prior to breaking into the storage unit.

Aria joined Spencer to look at the laptop and before the girls knew it they were locked in a freezer with liquid nitrogen pouring out of the vents courtesy of A. Thankfully Emily found them in time and took her relationship rage out on the freezer smashing it to pieces and breaking her friends out of it.

Is the end in sight for Spoby?

We’re going to be honest; it’s not looking good for Spencer and Toby is it? The strain of Toby’s job as a police officer continued to conflict with Spencer’s tendency to do illegal things with her friends this week. After trying to appeal to Toby several times, Spencer realised that her relationship was definitely on the rocks as he did everything he could to avoid seeing or speaking to her. What Spencer doesn’t know is that Tanner threatened Toby with the sack if he was found to be withholding evidence and if he continued to investigate Holbrook (Sean Faris).

Oh Aria! Why oh why. Instead of saying nothing to Ezra (Ian Harding) about her letter to Jackie (Paloma Guzman), she decided (stupidly) to come clean. Ezra’s initial reaction was one of indifference but when he took time to re-read the letter he realised maybe there was a bit of truth to what Aria wrote. The two shared a heartfelt discussion with Ezra suggesting that maybe they should part ways.

Emily and Talia (Miranda Ray Mayo) found some common ground this week when the Brew’s new chef revealed she was a lesbian. After Emily warned her away from Ezra, Talia explained that she was trying to suss out her new colleague as she was interested in her. Could Talia be what Emily needs to get over Paige (Lindsey Shaw)?

Ashley’s (Laura Leighton) indiscretion with Jason (Drew Van Acker) doesn’t seem to be coming to a conclusion any time. After spending time avoiding her toy boy following Ted’s (Edward Kerr) proposal, Ashley eventually gave in and met up with him to hand over her work before leaving the real estate agency. Jason pressed Ashley about her feelings for him and for Ted, which didn’t go down that well. As they hugged goodbye later, Jason went in for a kiss again leaving Ashley surprised but also still contemplating her answer for Ted.

Pretty Little Liars continues Tuesdays at 8/7c on ABC Family in the US and Wednesdays on Netflix in the UK. Watch the promo for the next episode Oh, What Hard Luck Stories They All Hand Me below: