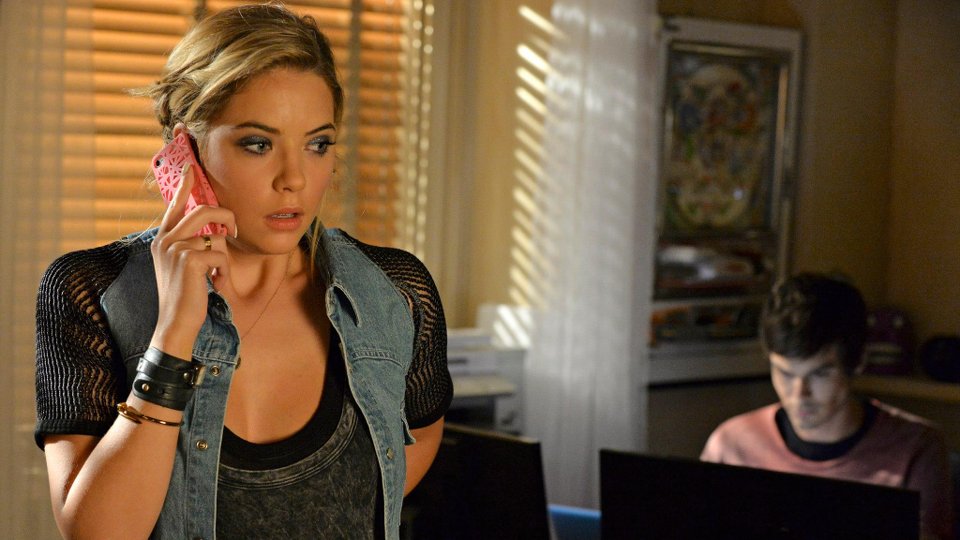 Pretty Little Liars progressed several storylines and set some new ones in motion as the liars tried to find out if Detective Holbrook (Sean Faris) has really been helping Alison (Sasha Pieterse) exact her revenge.

If you haven’t seen the latest episode of Pretty Little Liars and don’t want any spoilers we suggest you stop reading now. If you have seen it and want to relive all of the action keep reading.

A barrel of laughs

The liars received an alert to their phones informing them that Mona’s (Janel Parrish) laptop had been activated. Spencer (Troian Bellisario) turned to Caleb (Tyler Blackburn) to track down the laptop and they discovered it was at a storage unit. The two joined forces once again to investigate and when they arrived they bumped into one of their former teachers who complained about the smell that came from the storage unit they were trying to get access to. Spencer pressed the teacher for more information and she confirmed she had seen a blonde girl going in and out of the unit previously.

Unable to pick the lock, Caleb picked the lock of the teacher’s storage unit so he and Spencer could climb through the air duct and get access to the unit where Mona’s laptop was. Once inside they found the laptop and a lot of bagged items covered in blood. Their theory is that Holbrook was keeping all of the evidence in the storage unit so he could frame one of them for Mona’s murder.

Caleb and Spencer also found a barrel in the storage unit which they suspected could hold Mona’s body. A variety of chemicals were next to the barrel and Spencer explained that if Mona’s body was in the barrel she could either be dissolved or pickled. The lights went out cutting short their investigation.

Hanna was gobsmacked by her mother Ashley’s (Laura Leighton) close encounter with Jason (Drew Van Acker) and tried to tackle her about it several times. Her first attempt was scuppered by the surprise reappearance of Ashley’s boyfriend Ted (Edward Kerr) and Hanna discovered pretty quickly that her mother wasn’t going to talk about the Jason situation any time soon.

Desperate to understand why her mother slept with Jason, Hanna found a new sense of urgency when Ted asked her if she would be happy with him proposing to Ashley. After an initial misunderstanding where Hanna thought Ted knew about Jason, she gave the pastor her blessing. As soon as they finished talking she tried to hunt down Ashley but with no joy. Back at home Hanna waited until Ashley arrived and the two finally had a conversation with Ashley giving little away but admitting she didn’t feel comfortable with what she’d done. She also made it clear to Hanna that it was her decision to tell, or not tell, Ted.

Later in the day Ted arrived to make his proposal and he didn’t get the reaction he wanted. After popping the question Ashley rushed out of the kitchen and according to Hanna spent the night crying. Will she come clean to Ted? Is there marriage in their future?

Aria (Lucy Hale) continued to be haunted by her letter of lies that she used to get into college. First the letter appeared on the bottom of a receipt at the Rear Window Brew with a message from A. Aria then received a message signed by H asking her to meet at midday and to stop investigating. She thought it was Holbrook and shared the news with Emily (Shay Mitchell) who told her not to go alone.

Aria arrived at the Grill and bumped into Jason. He was there to meet Ashley who cancelled and Aria agreed to have lunch with him. The two discussed Alison with Jason admitting that he believes his sister is capable of a lot and that the police think she had help with Mona’s murder. Aria agreed that she, and the liars, shared the same theory. During their conversation Aria received another message changing the location of her meet with the mystery H.

Heading off to the new location, Aria was greeted with a bunch of flowers that she was supposed to pick up and she was surprised to discover the address was Hanna’s. Racing off to Hanna’s house she grabbed her friend and they opened the card in Hanna’s bedroom. The flowers were for Ashley from Jason thanking her for the previous evening. Confused Aria questioned Hanna who lied and said she’d sent the flowers leading Aria to storm out of the room.

The beginning of the end for Spoby?

Toby’s (Keegan Allen) transition from loyal boyfriend to reliable cop was never going to be a good fit for Spencer and her fellow liars but the latest episode could be indicating the demise of their relationship. Last week’s episode saw Toby frustrated by Spencer’s actions and that only got worse in the latest episode. Spencer ignored her college acceptance letters and Toby discovered once again that she was working with Caleb to investigate Mona’s death. Toby freaked out and told Spencer that she has to stop behaving in a way that could get them all in a lot of trouble. The future is not looking good for Spoby is it?

Emily tries to move on

Emily continued to be pretty rude to Talia (Miranda Rae Mayo) as she marked her territory at the Brew and reacted aggressively to every suggestion and change Talia made. The last straw came when Talia criticised Emily’s attire before realising the ripped shirt she was wearing was a gift from Paige (Lindsey Shaw). The two shared a brief moment of civility then things got kind of odd when Emily when to pick up her paycheck from Ezra (Ian Harding). Talia appeared to hit on Emily by complimenting her ‘out of work’ get-up then moved on to discuss Ezra’s backside. Awkward.

Emily also sent Paige a package with a variety of things that she left behind in Rosewood including the shirt. Is this really the end for Paily?

Spencer helps Jonny settle back in to Rosewood

Jonny (Will Bradley) moved into the Hastings’ barn and kicked off his new living arrangements by rooting in Spencer’s trashcan for leftover food items to use in his paintings. The newcomer grew up in Rosewood and has returned after years away. What’s the betting that he’s got a deep, dark family secret that somehow links to the Alison/Mona situation?

Pretty Little Liars continues Tuesday at 8/7c on ABC Family in the US and Wednesday on Netflix in the UK. Check out the promo for the next episode below: