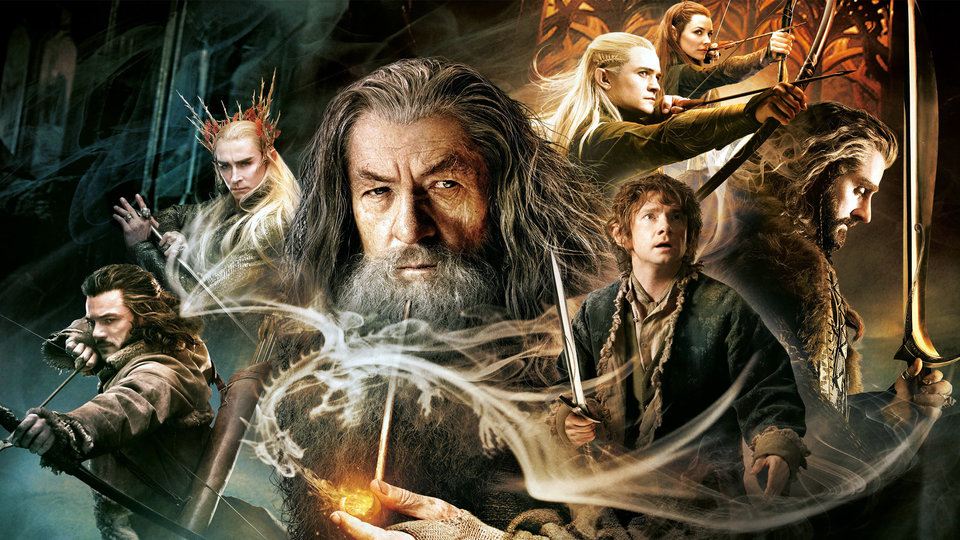 Bilbo Baggins (Martin Freeman – The Office) and Gandalf (Ian McKellen – X-Men) continue on their dangerous mission to help the dwarfs, led by Thorin (Richard Armitage –Robin Hood), reclaim their home from the deadly dragon Smaug. Along the way Bilbo has to contend with giant spiders, marauding Orcs and the deadly allure of the ‘precious’ ring. The unlikely group of allies venture further into the dark dangers of Middle Earth and arrive at the mountainous lair of Smaug the fire-breathing dragon, who holds the key to their very salvation.

The Hobbit: An Unexpected Journey arrived with a huge amount anticipation and expectation last December. With Peter Jackson once again at the helm, The Desolation Of Smaug (this second prequel to The Lord Of The Rings saga) has also been highly anticipated after such a disappointing first chapter that divided fans and casual audiences alike. The challenge that lay ahead of The Hobbit last year was two-fold. Can it replicate the vibe of the original trilogy whilst impressing a knowing audience who have now become used to huge technological leaps? With 3D now prevalent and the huge box-office success of projects like Avatar well-engrained into pop culture, do J.R.R Tolkien’s stories still hold a place in moviegoer’s hearts?

It’s hard to believe that The Fellowship of the Ring came out way back in 2001. 12 Years later and it’s safe to say Jackson’s original trilogy irrevocably changed the landscape of modern filmmaking. ‘An Unexpected Journey’ may not have been the instant win we were all expecting after laying down such a high marker with the first 3 films, but ‘The Desolation Of Smaug’ more than makes up for that shortfall with an adventure that’s both captivating and hugely enjoyable. Thankfully ‘The Desolation Of Smaug’ seamlessly blends into the style, structure and ambience of the original trilogy. From the scenery to the title treatment, this is every bit a Lord of the Rings adventure. Jackson has worked hard to retain that sweet, relatable element of the original trilogy and has certainly put a lot of effort into making these chapters of The Hobbit feel much more warm, welcoming and exciting.

All of the characters are well rounded with particular nods going to Sir Ian McKellen (who once again graces the screen as Gandalf) and Martin Freeman who makes a fetching Bilbo Baggins an easy hero to champion. Freeman also has a far greater action role to play this time around and he does exceptionally well here. Of the dwarfs, Richard Armitage leads the line well. Newcomers Lee Pace and Luke Evans are a joy to watch but it’s former Lost beauty Evangeline Lilly that really steals the show. Her portrayal of elf-warrior Tauriel is a joy to behold. The welcome reappearance of a familiar face also contributes massively to the success of The Hobbit: The Desolation Of Smaug. Orlando Bloom returns to the frontline as Legolas and immediately brings with him a sense of style, grace and assured gravitas. His appearance adds some much needed balance to proceedings and he is central to every major battle sequence in the film.

Thankfully the biggest problem with ‘An Unexpected Journey’ (the 3D frame rate) has been addressed – in a manner of speaking. Peter Jackson has persevered with a new advanced frame-rate (48fps format) that disorients and distracts in equal measure. If you’ve ever watched an up-scaled DVD you’ll know exactly what this looks like and just how it ruined part of the first Hobbit movie.

The advanced frame rate has the ability to conjure up some breathtaking clarity and detail but as a by-product, it also makes things move extra quickly because it’s doubling up on standard speed. The start of The Hobbit: An Unexpected Journey felt like you were watching a film in fast-forward. Simple scenes like people walking down the street took on a comedy effect due to unbalanced speed that then made everything look odd. It also made every major sequence feel like a computer game cut-scene rather than an immersive experience.

Last time around, this new format was heralded as the future of cinema. That’s a bold claim and its shortcomings clouded a lot of people’s enjoyment of the first film – myself included. Now, Warner Bros are distributing this second film on the merits of the story as opposed to the frame rate and this strategy should work out a lot better for everyone. If you wish to see ‘The Desolation Of Smaug’ at the higher frame rate you can do but for the casual viewer, this now won’t be shoved down your throat at your multiplex (as was the case last time around). By distributing the majority of the film in standard rate, people can once again enjoy the cinematic experience of the story rather than get needlessly distracted by technology. This could be the best thing to happen to ‘The Desolation Of Smaug’ because it draws viewers back into the immersive and compelling characters and storylines of Tolkien’s classic.

‘The Desolation Of Smaug’ really delivers spectacle and scope in abundance. There are some amazing battle sequences coupled with sweeping landscapes that give the film a truly epic feel. The giant spider attacks are incredibly effective at making your skin crawl. These Arachnids are terrifying and anyone who hates spiders will both wince with fright and rejoice heartily at their bloodied slaughter. The film also makes full use of the expansive environment and haunting atmosphere to create some breathtaking visuals – Gandalf catching a glimpse of the evil that lies in wait is a very effective piece of visual moviemaking whilst the Orc fights are always violent and tangible in a satisfying way.

As good as everything else is, it’s the final act that really takes ‘The Desolation Of Smaug’ onto a whole new level. The effects for the dragon are simply stunning – there really is no other word for it. Fuelled with fire and malice, Smaug is every bit as frightening and malevolent as you’ve imagined whilst reading the book. It’s brought vividly to live by special effects that will leave you shuddering in awe. The fire-breathing is amazing, his movements are fluid and the dragon’s voice is with handled with excellent, maniacal precision by national treasure Benedict Cumberbatch.

The Hobbit: The Desolation Of Smaug is a thoroughly enjoyable blockbuster that will certainly find a good audience. For anyone looking to Peter Jackson for game-changing cinema, you’ll be relieved to see that he has found his footing once again. You’ll leave this in a much more positive mood compared with the drabness that greeted the end of ‘An Unexpected Journey’. Learning lessons from the past and making full use of the fact that this is a far more action-heavy part of the book, Jackson has crafted a wonderful spectacle that delivers at every turn.