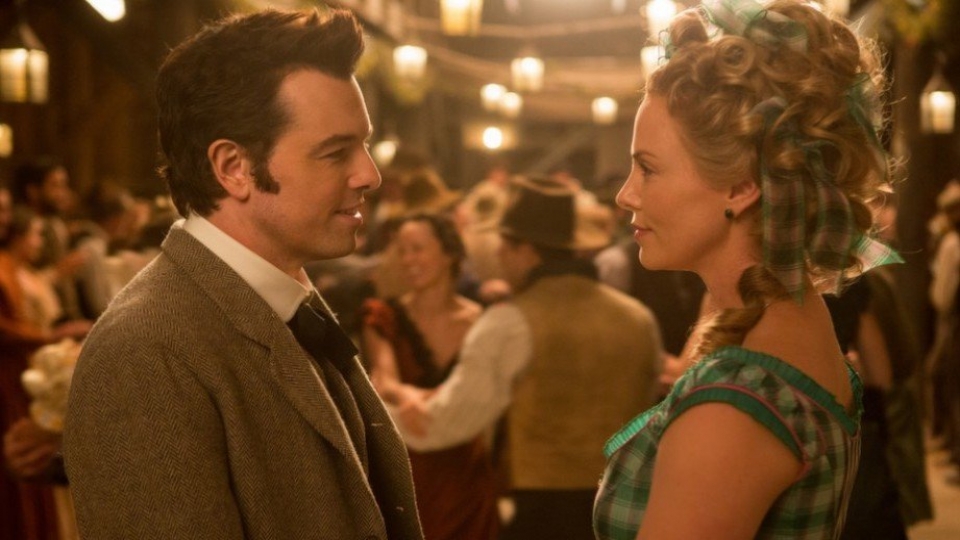 Albert (Seth MacFarlane) is a sheep farmer will little else going for him in life. It causes his girlfriend Louise (Amanda Seyfried) to leave him for another man. Albert decides he has had enough of the Wild West and makes a decision to leave town. But during a routine fight that breaks out in his local bar, he saves a beautiful stranger. Anna (Charlize Theron) has just moved into town and they hit it off instantly. She offers to coach him for a gun-duel he has inadvertently stumbled into. But Anna is hiding a mysterious past. Soon, that dark secret will ride into town looking for Albert’s blood.

After the global success of Ted, Seth MacFarlane has rightly been labelled as hot property in Hollywood. Having established himself with Family Guy, Ted proved that MacFarlane was much more than just a one-trick pony. His latest project, A Million Ways to Die in the West, arrives then with huge levels of expectation and a trailer that certainly made us laugh out loud.

Unfortunately, the film isn’t a patch on Ted. A disappointment given what we know about MacFarlane and his style of comedy, A Million Ways to Die in the West feels a tad lazy and predictable whilst lacking any real comedic bite. The gags are present and accounted for and the film in general is certainly amusing. But when weighed against what we know he can produce, it’s hard to fathom why this was his next project.

At the core of the plot is a conventional love-story. That’s fine and for the most part it works very well with Charlize Theron handing in a great supporting turn as Anna. MacFarlane is a good leading man and they share a great chemistry. But outside of this, the film feels like a series of visual gags pieced together by a very thin plot.

There are quite a few missed opportunities here too. Sarah Silverman and Giovanni Ribisi steal the film and should have been used much more. Similarly, Liam Neeson only pops up briefly and whilst he is entertaining, there isn’t enough of him. Amanda Seyfried could have done with a meatier role too as Albert’s former love Louise. But Neil Patrick Harris is awesome as Foy, a moustached-rival for Louise’s affections. He also gives the film a brilliant musical number that is toe-tappingly memorable.

A Million Ways to Die in the West starts showing cracks in its general comedic approach. Whereas Family Guy and Ted all adopt stories that map out astutely observed gags and social commentaries, this films feels totally content with just relying on toilet humour. There’s a sprinkling of true genius in the film – Albert’s initial exchanges with his parents, his commentary on why the West sucks and a montage involving a trip to the doctors involving a small bird – all of which bring a tear to the eye. But unfortunately this isn’t enough. The cameos are always worth looking out for though, with some huge Hollywood names in the mix. And there’s a truly wonderful Back to the Future gag in there, which is worth the price of admission alone.